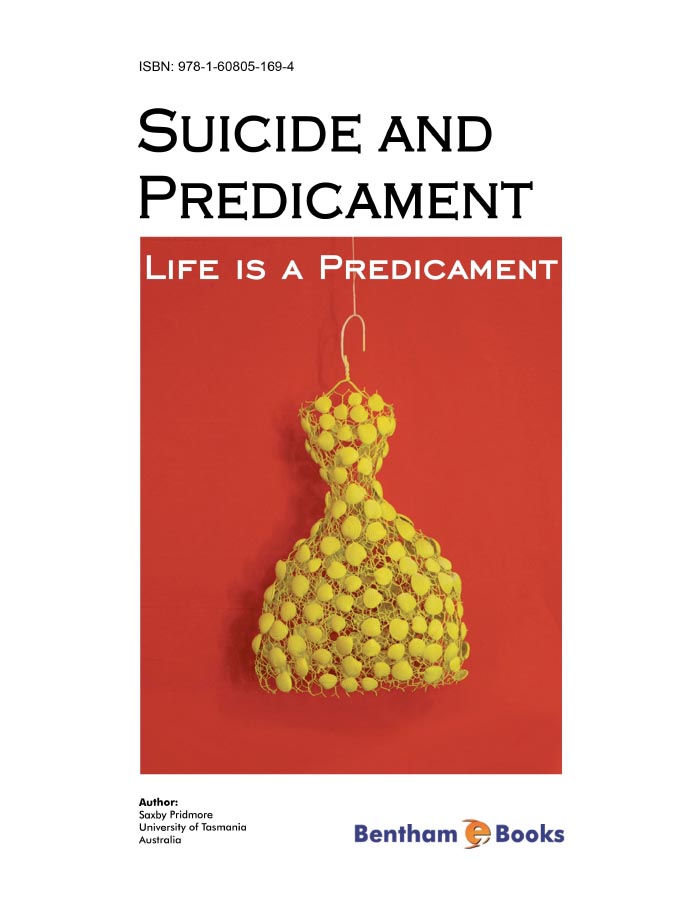 "Suicide and Predicament: the medical model of suicide is incomplete" takes a broad view of suicide. It argues that a large proportion of people who suicide do not have a mental disorder, and therefore it is essential to know about the predicaments of people. The book draws on sociology and takes issue with the medicalization of distress and suicide. It discusses genetics and draws attention to the importance of alcohol in suicide. It takes as examples, 127 suicide cases found in public record. Unique features include 1) predicament model, 2) pathways model, 3) typology of suicide, and 4) prevention initiatives.

“There is but one truly serious philosophical problem and that is suicide. Judging whether life is or is not worth living amounts to answering the fundamental question of philosophy.” Albert Camus, 1942.

We have confronted the spectre of suicide throughout recorded history. It is always ready, in every dark moment, in both hemispheres of the world.

Professor Pridmore has demonstrated in this book, that in many, perhaps most cases, it is not mental illness which precedes suicide, but a predisposition plus social circumstances and acute stress. He brings all such factors together in his concept of ‘predicament’. This ‘predicament paradigm of suicide’ is the breakthrough of the early 21st century, in this troubled field. I strongly encourage medical people, psychologists and social workers, the judiciary and indeed, everybody working within the social system to pay attention.

The prediction of human behaviour is a difficult, and some would argue, not really a medical problem. Even accurate prediction of the course of a relatively simple medical condition suffered by a particular individual may be difficult, or impossible.

I quote Camus above. He also wrote that we see some people die because they judge that life is not worth living, and that paradoxically we see others get killed for the ideas or illusions that give them a reason for living. The question of the meaning of life, of course, remains unanswered – but this is by no means a question only for the medical community, as the answer lies at the heart of conditio humana.

Many now accept that social and psychological facts may play a major role when it comes to commission of the act. The two great wars left the world in turmoil with values torn to pieces- maybe as never before. This led to a 'fatherless society' in many western countries, the development of the student revolts, the hippie movement, the sexual revolution and the emancipation of women.

The price of the two great wars was high; 55 million were killed by their counterparts, and a few killed themselves. Some killed themselves to escape justice, but more out of shame and overwhelming consequent anxiety.

Today we are facing problems in a different form. International transport and migration have brought people together who do not understand each other. Some people affected by traumatic experiences make it to friendly foreign shores. But, they carry their burdens with them. With globalisation, there is no escape.

We must seek, as psychiatrists or citizens of an unquiet world, freedom and communication between those with different opinions, as every act of discrimination (race, religion, whatever), is ultimately degrading to all mankind.