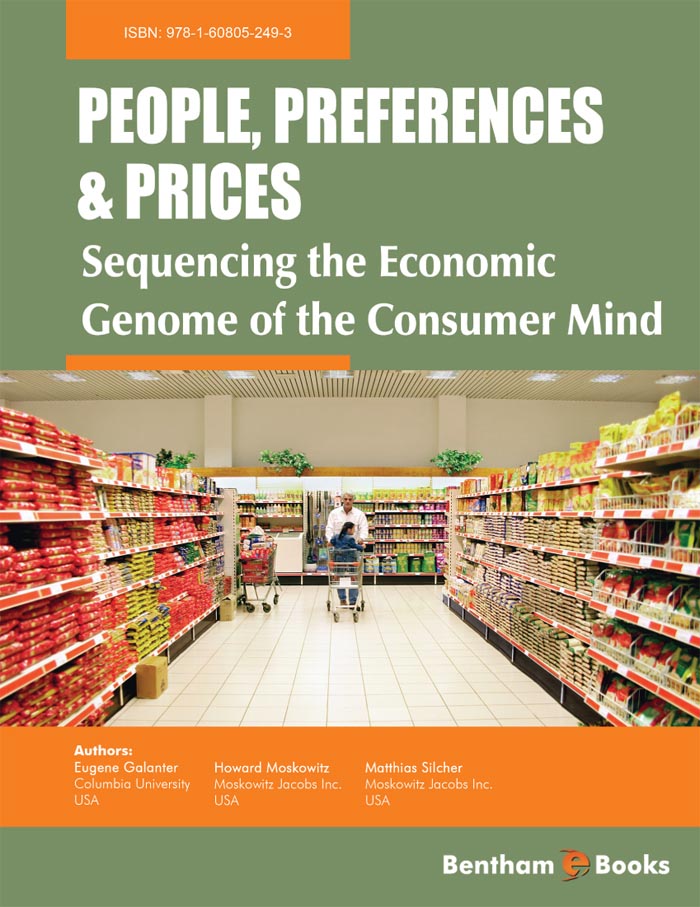 This book explores a variety of topics that fall in the realm of psychological and behavioral economics. It demonstrates to the reader how to perform straightforward experiments in order to understand how people think about the economic aspects of their daily lives.

Behavioral economics is a 'hot new area' of economics and consumer psychology. This book provides a comprehensive guide on consumer research and the types of results required. These approaches are spreading further around the globe, thanks to the work of Dr. Howard Moskowitz, one of the authors of this book, and the incredible success of Selling Blue Elephants. In other words, the book is just slightly ahead of a sea change in consumer research, and may be one of the 'tipping points'. (Coincidentally, Malcolm Gladwell, the bestselling author, is a great admirer of Dr. Moskowitz)

The readers of this book are in for a treat. They may also be in for a surprise – unless, of course, they are already familiar with the thought-provoking works of the authors. By my reckoning, Eugene Galanter, Howard Moskowitz, and Matthias Silcher together have amassed well over a century of experience in business and academia, the lion’s share of their experience being in the arenas of consumer assessment, product development, marketing, and, notably, psychophysics. Fortunately for the readers, Galanter, Moskowitz, and Silcher have effectively funneled their experience, knowledge, and wisdom into this tour de force on the psychology of economics. People, Preferences & Prices is an innovative foray into the minds of consumers.

Over the last four decades, the psychology of economics has emerged as one of the hottest topics in the discipline of economics. The psychology of economics is grounded in the recognition that economic acts are, by their very nature, the outcome of human agency. And recognizing the role of human agency, psychologists and other behavioral scientists have tried, in an ever-growing number of articles and books, to understand how cognitive and emotional processes affect economic behavior. How does our psychological make-up affect, for example, our decisions about purchases and investments? As a consequence of our needs, desires, and values, as well as the ways that we process, store, and remember information, economic decisions can depart from the predictions of traditional economic theory -- an outcome that might surprise, or dismay, some readers of Adam Smith's Wealth of Nations, though not readers of his Theory of Moral Sentiments.

In the Wealth of Nations, Smith said that the 'invisible hand' leads all of us to maximize our own wealth, but in Moral Sentiments, he said that the 'invisible hand' leads those of us who are better off to share our wealth with others. The Wealth of Nations, published in 1776, complements the Theory of Moral Sentiments of 1759, written while Smith was Chair of Moral Philosophy at Glasgow University. Both works articulate Smith's views on human nature, though each emphasizes a different aspect of the human psyche: Just as acting from self-interest leads to economic success, and thereby makes us happy, so does acting from sympathy to others lead us to act benevolently toward them, and thereby makes us happy too.

People, Preferences & Prices treats the psychology of economics from a unique perspective, one that assimilates the homo economicus, or economic man, of rational economic theory into what I would dub psychophysical man. The term psychophysical man, like economic man, needs to be understood as a collective plural. The term encompasses women as well as men, of course; but it also encompasses person-to-person variations as well as broad and perhaps universal principles of human nature. In order to understand human minds, it is crucial to acknowledge and characterize their Whitmanesque richness and variety -- the differences, large and small, in the ways that people evaluate whatever it is that matters to them, and whatever does not matter.

Psychophysics offers both a framework of interconnected concepts for understanding mind and behavior, and a practical set of tools for studying them. In doing this, psychophysics provides an approach as dear to my own heart as it is to the authors'. As Galanter, Moskowitz, and Silcher note, psychophysics is the oldest branch of experimental psychology. The practice of psychophysics even predates the coining of the term by the German physicist-philosopher Gustav Fechner a century and a half ago. Psychophysics deals with what Fechner called the ‘exact science of the functional relations … between the bodily and mental, the physical and psychical world.’ By providing both a conceptual framework and a set of experimental methods to study sensation and perception, psychophysics played a prominent role in experimental psychology during its formative decades during the late nineteenth and early twentieth centuries. But the purview of psychophysics extends far beyond the bounds of sensory perception alone, as People, Preferences & Prices amply demonstrates. Indeed, just a few years after completing his monumental two volumes of the Elements of Psychophysics in 1860, Fechner himself began a series of studies that adapted his psychophysical approach to basic issues in aesthetics.

Despite important differences between Fechner’s approach and that of Galanter, Moskowitz, and Silcher, psychophysicists share an important vision about the human mind: that mental life can be examined and characterized in quantitative terms. The virtue of modern psychophysics stems in large part from the fact that it combines its fertile conceptual framework with a wealth of new methods, methods that can be used to show how, in the authors' words, ‘people can act as measuring instruments’. This is to say that people are capable of giving meaningful and useful judgments about the quantitative aspects of their own personal, subjective experiences.

Nearly fifty years ago, in a study recounted in Chapter 3, Eugene Galanter asked a pair of questions that are central to the psychology of economics: What is the subjective or mental value of money? How does the ‘utility’ of money, to put it in the language of economics and decision-making, relate to money’s physical value (say, in dollars or Euros)? Obviously, $20 has twice the physical, monetary, value of $10. But does $20 have twice the subjective or psychological value of $10? To address these questions, Galanter capitalized on methods championed by the eminent American psychologist S.S. Stevens -- with whom he, Moskowitz, and I all had the privilege of working, at one time or another, longer ago than perhaps any of us likes to remember.

In brief, Galanter found that, on average, to double the amount of happiness produced by $10, it takes a bit more than $40. That is, the mental value of successive increases in money, the positive marginal utility, is proportionally smaller than the corresponding physical value. This outcome might explain why, as commonly believed, receiving $10 brings more happiness to a poor person than a rich one -- or, as the mathematician Daniel Bernouilli wrote nearly 300 years ago, ‘a gain of one thousand ducats is more significant to a pauper than to a rich man though both gain the same amount.’

The experimental methods of psychophysics make it possible to quantify underlying mental structures, to reveal the 'algebra of people's minds.' Galanter, Moskowitz, and Silcher are concerned with how people perceive, think about, and choose among the ‘stuff' around them, especially among the products that inundate those who live in relatively wealthy, industrialized countries (a portion of the world's population that, I believe, will inexorably continue to increase in the decades to come). The algebra of the mind expresses mental structures, providing insights into, and templates for, what the authors call each mind's economic genome. Indeed, People, Preferences & Prices has as its subtitle, Sequencing the Economic Genome of the Consumer Mind, making clear the important role that this biologically-inspired metaphor plays in the authors' conception of consumers' minds.

In the biological world, the number of possible human genomes is enormous. Genes themselves come in many varieties, known as alleles, and every human genome comprises a particular combination of alleles of the 25,000 or so human genes (the exact number still being uncertain). Every person has a unique genome (except, with proviso, in the case of identical twins). So too, by analogy, every consumer -- hence, every person -- has a unique mental genome. A leitmotif pervading the book is the authors' emphasis on the use of experiments grounded in psychophysics to identify and characterize subgroups of the population that use similar rules of valuation -- the economic genomes of different segments of the population, such as those who are relatively sensitive or insensitive to the price of a particular product.

How far might we stretch the metaphor? After all, genomes in biology have both structural properties and functional consequences. Genomic structures come from the organization of DNA in genes. Genomic functions come from the ways that individual genes turn on or off, thereby expressing or not expressing particular proteins. And some genes turn on and off, through mechanisms not yet fully understood, in response to environmental signals -- a realm of biology called environmental genomics. Recent findings suggest that environmental factors can affect gene expression epigenetically, by biochemically changing the ways that bits of DNA express proteins. Might something analogous take place in the realm of mental genomes? The economic genomes of consumer minds are labile too, capable of adjusting to circumstances. Every mental genome reflects the person's experience as well as biological endowment -- experience and endowment both being unique. Psychophysical experiments can offer not only snapshots of momentary mental genomes, but also videos of the ways that mental genomes unfold over time -- thereby displaying the environmental genomics or epigenetics of the consumer's mind.

In the authors' words, all of us are ‘consumers and customers of one or another sort. We all buy, most of us use credit cards, some of us clip coupons, and in the main we're attuned to prices, to value, to the stuff of everyday life.’ Indeed, People, Preferences & Price could also be subtitled Psychology Meets the Stuff of Everyday Life. Where economists analyze the production and consumption of goods and services, Galanter, Moskowitz, and Silcher aim to illuminate why people pay what they do for a can of cola, why they reject the offer for a particular credit card, why they respond positively to one marketing message but not another.

Pertinent to the last example, Chapter 8 ends with a recommendation: ‘A good rule of thumb is: have a convincing offer, but try to write it in fewer than 20 words.’ Readers especially interested in marketing may find clear and specific recommendations like this themselves worth the cost of admission. In any case, each of the 27 chapters provides fresh insights into how and why people make their everyday decisions to buy or not buy, or to choose one product over another, whether a soft drink or a credit card. The authors probe the genomics of the economic mind in what is largely the language of everyday discourse. Many researchers on behavioral economics tell little stories or pieces of stories. Galanter, Moskowitz, and Silcher take on a much bigger task -- to tell a comprehensive story about the psychophysical mind of homo economicus.