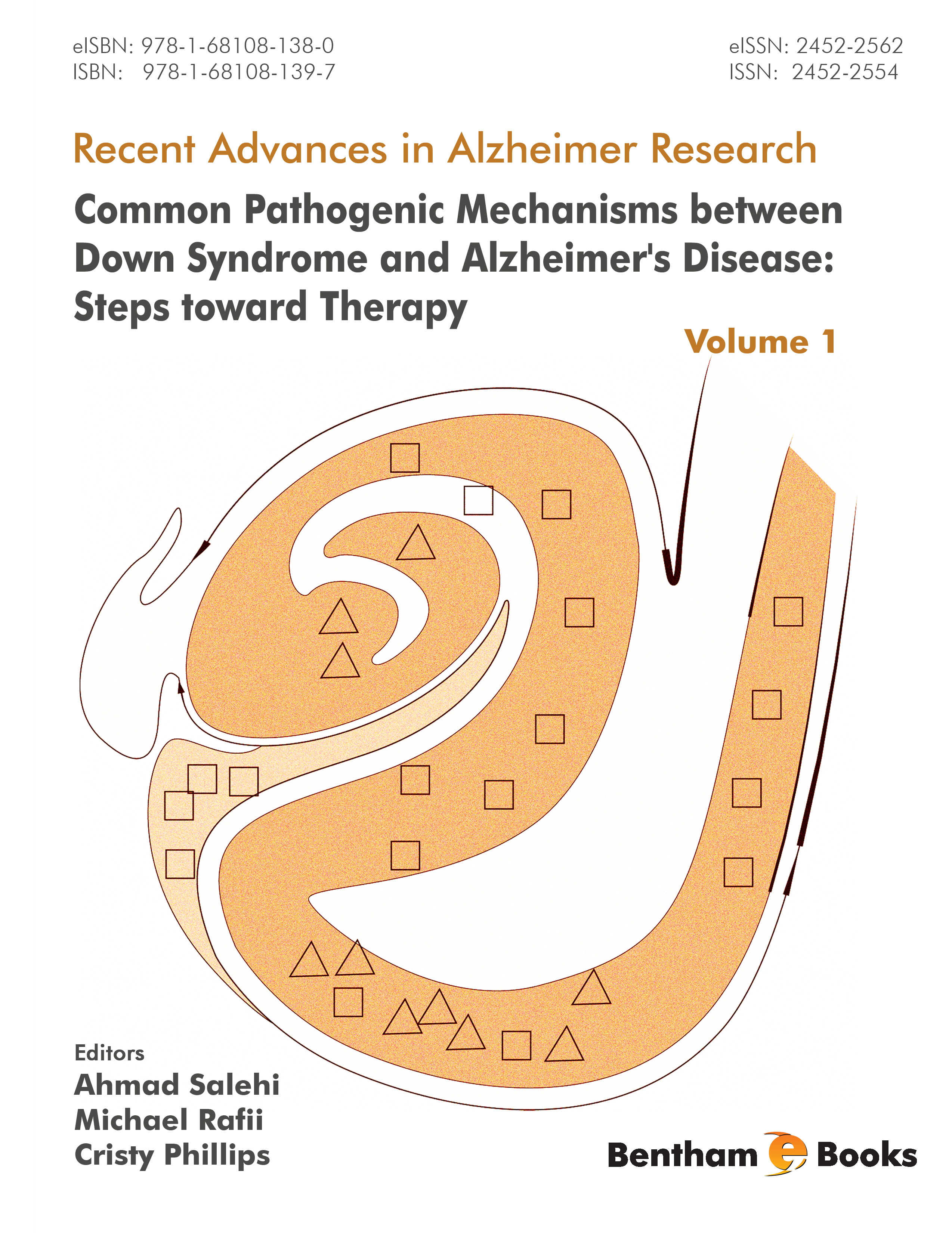 Common Pathogenic Mechanisms between Down Syndrome and Alzheimer's Disease: Steps toward Therapy

Down syndrome is a chromosomal disorder affecting more than 5.8 million individuals worldwide. Down syndrome can be viewed as a complex multi-system disorder as it manifests into significant physical, psychological, and cognitive abnormalities in affected persons. With aging, most adults with Down syndrome develop the clinical and neuropathological hallmarks of Alzheimer's disease. Unfortunately, no extant treatments have proven beneficial for cognitive dysfunction for either Down syndrome or Alzheimer’s disease. An incomplete understanding of the common pathogenic mechanisms that link these two disorders has limited researchers’ progress to this end. Common Pathogenic Mechanisms between Down syndrome and Alzheimer's Disease: Steps toward Therapy is a novel attempt to fill this void, by summarizing the work of world-renowned scientists in the field of Alzheimer’s disease and Down syndrome, and thus providing an unprecedented opportunity to attract attention to Down syndrome as a tool for understanding the common molecular mechanisms that underlie Alzheimer’s disease and to develop new therapies for similar neurodegenerative disorders of the brain.

The book covers the fundamental pathophysiology and molecular mechanisms behind the incidence of Alzheimer’s disease in Down syndrome affected individuals as well other key topics such as diagnosis and management, in vivo brain imaging studies, and progressive neurodegeneration of the monoaminergic system. The book concludes with a review of recent clinical trials of drugs designed to mitigate cognitive dysfunction in aging adults with Down syndrome and establishes a scientific warrant for the increased testing of candidate pharmacotherapies.

Common Pathogenic Mechanisms between Down syndrome and Alzheimer's Disease: Steps toward Therapy is a useful reference clinicians involved in treating Down syndrome patients as well as for neuroscience researchers seeking to understand the influence of a specific case of aneuploidy on Alzhemier’s disease incidence and its progression at the molecular level.

It has been long been known that aging individuals with Down syndrome (DS) develop Alzheimer’s disease (AD)-related pathology [1] and have an increased risk of dementia [2]. As the most common form of live-born aneuploidy [3], DS affects 6 million people worldwide. The condition is associated with varying degrees of cognitive, behavioral, and psychological disturbances. Fortunately, significant advances in social and medical care have dramatically extended the life span of affected individuals in recent years. Whereas the average life expectancy was approximately 9 years of age in 1929 [4], it was approximately 60 years of age in 2000. Yet accompanying this increase is an ever-expanding proportion of people affected by early-onset AD, creating an imperative to disentangle the shared pathogenic mechanisms that underlie cognitive decline in both disorders. Emboldened by this challenge, a number of scientists from across the world have increasingly made effective and efficient progress towards understanding the genetic, neuropathological, and clinical correlates associated with cognitive decline in DS and AD. Indeed, a review of PubMed reveals that more than 100,000 articles have been published on topics related to AD (using term “Alzheimer’s disease” or “Alzheimer disease”) and 18,000 articles have been published on DS (“Down syndrome” or “Down’s syndrome”) since 1985. Comparatively, there were only 1900 papers that examined topics related to both DS and AD (approximately < 2% of the total). Notwithstanding, few resources have attempted to comprehensively summarize the tremendous progress that has been made in this field in recent years. To fill this void, we have assembled a team of world-renowned scientists in order to gather a compendium on the topic of shared pathogenic mechanisms in DS and AD.

Accordingly, in Chapter 1, Dr. Elizabeth Pohlman chronicles a history of changing societal attitudes towards persons with DS and AD and, in so doing, acknowledges responses that have ranged from deprivation and abuse, tolerance and protection, understanding and acceptance, to one that increasingly approximates full social and medical inclusion. Dr. Pohlman highlights current challenges that face contemporary society, particularly those deriving from the promise of cognitive enhancing therapies. Through a frank and honest discussion of this topic, she challenges us to consider the full gamut of ethical and political issues related to science and medical care for persons with DS and AD. In Chapter 2, Drs. Capone and O’Neil provide professionals with a framework for the general evaluation and management of medical care for persons with DS. Due attention is given to clinical conditions that are frequently observed in this population (e.g., mental health and sensory issues, seizure and sleep disorders, orthopedic abnormalities, feeding and swallowing difficulties, and cardiac impairments) and how these conditions present throughout the lifespan. Accordingly, this section fosters an awareness of how optimal medical management can be used to improve overall health and quality of life for affected individuals.

In Chapter 3, Dr. Shoumitro Deb describes the best practice for making an early and accurate diagnosis of dementia in aging persons with DS and long-standing cognitive impairment. Throughout the text, he carefully articulates characteristic similarities and differences in the phenotypic expression of dementia in adults with DS and AD. Moreover, he details how neuropsychological tests and informant-rated scales can be used to gather longitudinal information to detect subtle changes in status in aging adults with DS and, in turn, to optimize dementia care and intervention.

In Chapter 4, Dr. Shoumitro Deb provides a foundation to better understand the origin of problem behaviors frequently exhibited by persons with dementia. Moreover, he describes key supports that can be utilized to promote the wellbeing of affected individuals, including pharmacologic and nonpharmacologic interventions. Finally, he underscores the importance of a multidisciplinary approach to care to better meet the diverse service needs of adults with dementia and cognitive disability who reside in the community.

In Chapter 5, Dr. Damien Colas provides compelling evidence that sleep abnormalities contribute to cognitive dysfunction in both DS and AD. Initially he begins with an overview of sleep neurobiology, the mechanisms that regulate the sleep-wake cycle, and the central functions of sleep. Following this, he describes sleep abnormalities common to DS and AD and explains how sleep-based cognitive interventions may one day be utilized to mitigate cognitive dysfunction in both populations.

In Chapter 6, Dr. Gulati and colleagues provide compelling evidence that gene dosage abnormalities contribute to seizure disorder and cognitive dysfunction in DS and AD. Indeed, it has been shown that patients with AD exhibit an increased risk of focal and generalized seizures whereas older persons with DS exhibit an increased rate of late onset myoclonic epilepsy. Accordingly, data presented in this chapter clearly establishes an imperative for the earlier detection and management of seizure disorder to promote more positive outcomes in both the DS and AD population.

In Chapter 7, Dr. Head and colleagues demonstrate how in vivo neuroimaging technology is currently being used to study changes in cognition, function, and brain structure in aging adults with DS. Threaded throughout the text is a frank appraisal of the strengths and weaknesses of the various approaches along with a discussion of future opportunities, including widespread deployment of these technologies for earlier diagnosis and intervention. Clearly articulated in this chapter is the promise that technology holds for elucidating the neurobiological mechanisms that underlie dementia and for evaluating candidate therapeutics.

In Chapter 8, Dr. Pooler and colleagues carefully detail the neuropathological features of the DS brain. Documented in this chapter are characteristic lesions that occur (abnormal amyloid accumulation, tau deposition, synaptic loss, and brain atrophy) with disease progression. Following this is a description of regionally specific neuronal vulnerability commonly seen in DS and AD. Specifically noted are intraneuronal accumulations of Aβ in the DS brain (occurring as early 4 years) in a pattern that is similar to that seen in familial AD. The chapter concludes with a summary of the effects of a number of triplicated and non-triplicated genes on DS/AD pathogenesis.

In Chapter 9, Drs. Wilcock and Head discuss the relevance of inflammatory processes in the pathophysiology of AD and DS. In doing so, they successfully link the role of these processes to the accumulation of Aβ in the brain before discussing how immunotherapies may be utilized to lower brain amyloid levels and modify disease progression. By extrapolating findings from studies of AD, they offer evidence that a host of triplicated gene(s) on HSA21 may contribute to inflammatory processes and dementia in mouse models of DS.

In Chapter 10, Dr. Carmen Martínez-Cué and colleagues explore various transgenic and trisomic mouse models developed to recapitulate AD and DS phenotypes, respectively. This section demonstrates how, despite a number of inherent limitations, the various models have been strategically exploited to uncover the relationship between overexpression of genes and the cellular and molecular mechanisms implicated in AD and DS. Furthermore, a discussion on the vital role that these models play in the development and testing of pharmacotherapeutics is presented.

In Chapter 11, Dr. Kumar Sambamurti and colleagues presents evidence that the amyloid precursor protein gene (APP) plays a vital role in the pathogenesis of both DS and AD. APP is among the ~ 700 HSA21 genes typically triplicated in DS. Yet, it has been shown that adults with DS without triplication of APP do not show AD-related pathology, suggesting that APP contributes of ADpathology in DS. Further supporting this notion is evidence from mouse models of DS and AD that demonstrate that APP is both necessary and sufficient for neurodegeneration. Based upon this rationale, this section ends with a summary of therapeutic strategies that target APP in AD and DS.

In Chapter 12, we (C. Phillips and A. Salehi) review a bevy of neuropathological and biochemical studies implicating monoaminergic dysfunction and cognitive impairment in DS and AD. Indeed, convergent evidence now clearly demonstrates that neurotransmitter imbalances contribute to the cognitive and behavioral abnormalities commonly seen in both disorders. Fortunately, a number of clinical and preclinical studies suggest that treatments that mitigate neurotransmitter imbalances can be used to mitigate cognitive dysfunction, establishing a warrant for future clinical trials in this area.

The ultimate desired outcome for all preclinical research is the translation of findings into well-designed and executed clinical trials. Recognizing this, Dr. Rafii critically reviews in Chapter 13 ongoing clinical trials for cognitive dysfunction in DS. Of particular note is his prediction that continued advances in the field will enable the deployment of active and/ or passive anti-beta-amyloid immunotherapy and Betasite APP cleaving enzyme 1 (BACE) inhibitors in clinical trials for DS in the near future, therapeutic strategies that could impose strong disease modifying effects and mitigate cognitive decline.

Given the evidence presented here, it becomes clear that DS represents a naturally occurring population of individuals at increased risk for AD and, in turn, one that is well positioned to benefit from early evaluation, monitoring, and therapeutic targeting of cognitive dysfunction. Moreover, knowledge that shared pathogenic mechanisms underlie cognitive decline in both disorders suggests that robust crosstalk among researchers from the DS and AD research communities may rapidly accelerate the pace of scientific discovery. In keeping with this notion, it is our sincere hope that this compendium can be leveraged to facilitate a dialogue among researchers, ignite further scientific discovery, and improve patient care.