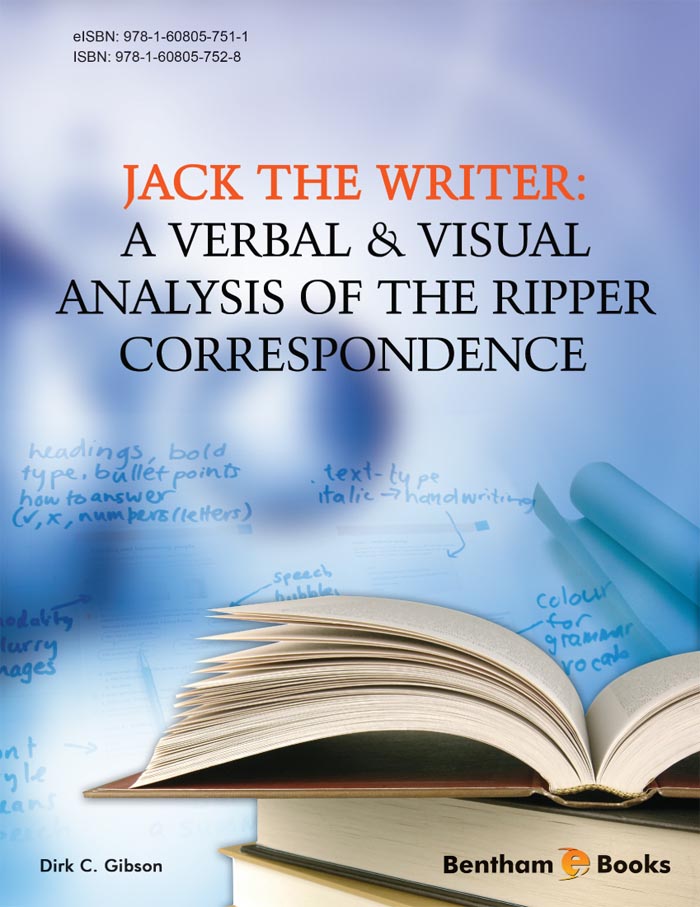 Jack the Writer: A Verbal & Visual Analysis of the Ripper Correspondence

This study of the Jack the Ripper correspondence is a valuable addition to the volumes of extant published material on this fascinating series of unsolved crimes. While there is no shortage of books on this case, this new study will offer readers several novel and original contributions.

The theme of this book is simple. The most prevalent topics in the Ripper letters are quantified and documented through these criminal missives. It seems that the Ripper’s message was one of disrespect and contempt for the Establishment in Victorian England. The Ripper correspondence is replete with taunts and insults directed against British law enforcement and the monarchy. The Ripper rhetoric is the rhetoric of revolution.

Readers will be treated to the largest extant collection of Ripper letters. Each letter is included in the text, and analyzed in topical terms. This allows readers to see for themselves the recurrent themes, people and linguistic mannerisms of these unusual criminal documents.

O Have You Seen the Devle

Did Jack the Ripper write these words? If so, was he (or she) trying to be poetic or was he just a poor speller? Did he write any of the letters that were sent during that bloody rampage in London’s Whitechapel in 1888? Or was he entirely oblivious to the strange flood of correspondence? If he did write any (or many), how can we tell which ones?

Many people believe it is a proven fact that the killer known as Jack the Ripper picked his own moniker, taunted the police with their failure to catch him, and played a successful game of cat-and-mouse. That’s probably because so much serial killer fiction depends on these devices for suspense and the villain’s development. As we absorb oft-repeated cultural narratives, we start to believe they’re true. But this doesn’t help us establish the actual facts about Jack. Communications professor Dirk C. Gibson attempts to rectify this.

Prior to this eBook, he published Clues from Killers: Serial Murder and Crime Scene Messages. He covered a number of cases in which killers wrote letters to the police or some media agency. The Zodiac, Dennis Rader (BTK), the Son of Sam, and the DC Sniper are among them. So is Jack the Ripper, which foreshadows Gibson’s acceptance of him as a correspondent.

A key question is this: What do offenders gain from writing such notes? Some of them have told us. Rader strove to be included among the elite serial killers. When his early crimes weren’t connected, he had to do it himself, so he proceeded to explain what fuels serial murder. He even nicknamed himself. The Zodiac liked taunting the press and police. It seems that his letters made him feel superior. Albert Fish, a sadist, wrote to a victim’s mother to relive his crime and envision her reading his description of killing and eating her daughter. With red ink, Lucian Staniak sought to punish victims and society alike. What, then, did Red Jack gain? Gibson believes that a series of letters are quite revelatory on this point.

He’s not the first to focus on the Ripper correspondence. In 2001, for example, Stuart Evans and Keith Skinner published an illustrated compendium of letters attributed to Jack the Ripper. Among the hundreds that arrived to news agencies and Scotland Yard with advice on how to investigate the case were correspondences ostensibly from the killer. Apparently, it was a fashion to send a “Jack the Ripper” letter to the police, so it was difficult to sort out which – if any – might be authentic. The Evans/Skinner book is a collection worth having, if only to see the variety of missives sent. It’s also valuable to look through this eBook as one goes through Gibson’s analysis.

For many Ripperologists, three letters stand out as potentially authentic. They’re known, respectively, as the letter “From Hell,” the “Dear Boss” letter, and the “Saucy Jack” postcard. The “Dear Boss” letter, which seemed to accurately describe one of the fatal attacks, was signed, “Jack the Ripper.” The “Saucy Jack” note came quickly after, with a similar tone and handwriting. Both went to the Central News Agency, while the “From Hell” letter was sent to the head of the Whitechapel Vigilance Committee, with half a kidney. Its style and tone are different but not its themes. It did not bear the Ripper signature.

Which brings us to methodology. Past researchers who’ve make claims about the letters have supported their approach with whatever “scientific” method was in vogue in their day. For example, one analyst used “microphotography,” or magnification, before stating that nearly three-dozen letters were by the same hand. Various handwriting experts have also provided expertise. However, no one has yet convinced today’s core group of Ripper exerts that we can tell beyond doubt that the killer wrote letters, or proven which ones were from Jack.

So, let’s consider some facts about handwriting and content analysis. Handwriting experts make a fundamental assumption: no two people write exactly alike, so a careful analyst can distinguish one person’s writing samples from another’s. Repeated usage over a long period of time supposedly crystallizes a specific idiosyncratic style that will vary only slightly over the years. When conducting an examination, analysts look at “class characteristics,” which are formed from whatever writing system the author learned, and “individual characteristics,” or features unique to that individual. It is the latter that play an important role in forensic analysis.

An investigator might try to link a known specimen (“exemplar”) written by an identified person with a questioned document of unknown origin. Or the investigator might try to link several questioned documents to a common source. Since, we have no proven exemplars from Jack the Ripper, the second approach must suffice. If there are significant dissimilarities between two questioned documents, then it's likely that there are two different authors, unless the differences can be accounted for, such as the author having an accident between writing the items, or taking medication.

However, similarities are not necessarily a definitive indication, since even the most unique factor in a person's handwriting may show up in someone else's. Handwriting analysis, then, falls short of the proofs provided by, say, DNA or toxicological analysis. In fact, a 2009 report about the state of forensic science, based on a two-year study under the auspices of the National Academy of Science, questioned the legitimacy of including handwriting analysis on the accepted list of sciences. Yes, it’s been around for well over a century as a forensic tool, but the approach depends too heavily on the subjective elements of experience and interpretation.

So, let’s look at content analysis, also called forensic stylistics, attributional analysis, or linguistic analysis. Similar to handwriting analysis, the basic premise for content analysis is that no two people use language in exactly the same way. The method, often performed on computers, involves a detailed analysis of the content of a questioned document to compare what is written to what a potential source reads or generally writes. It also involves comparing content across documents. Some examiners claim that they can detect distinct features as precisely as anything this side of fingerprints and DNA.

The pattern of unique differences in a person's use of language, along with repetition of those traits and themes throughout his or her writing, offer internal evidence that links a person to a questioned document, or links two or more documents to one another. The language used can help establish the writer's age, gender, ethnicity, level of education, professional training, and ideology. The key items are vocabulary, spelling, grammar, syntax, and punctuation habits. Other kinds of textual evidence might include borrowed or influential source material, document formatting, and the physical document itself.

Gibson examines several of these items. To support his argument that the Ripper was an avid letter-writer, he explores claims made by other researchers. He also performs a detailed quantitative and qualitative analysis, and describes and defends his methods before he dives into the content. Gibson acquired as many letters as he could find from a range of sources. After putting them in order as best he could, he devised a long list of “content categories” or themes for comparisons. He also looked at subjects and people who were mentioned repeatedly, key phrases, and certain visual elements.

Finally, he uses this material to demonstrate what most concerned the killer, which brings us back to our original question: what do offenders gain from writing these letters? If Gibson is right, it’s all here in the pages that follow. Although Ripper scholars will be fascinated with the minutiae, I suspect that the average reader will be more interested in what motived Saucy Jack to kill and disembowel prostitutes.

Whether an examination of this depth proves that Jack the Ripper was a fervent and “saucy” correspondent I leave to readers (and other experts) to decide. That Gibson has made a contribution to Ripperology with his careful and multidimensional analysis is beyond dispute. 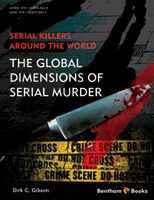 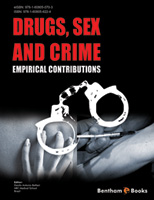