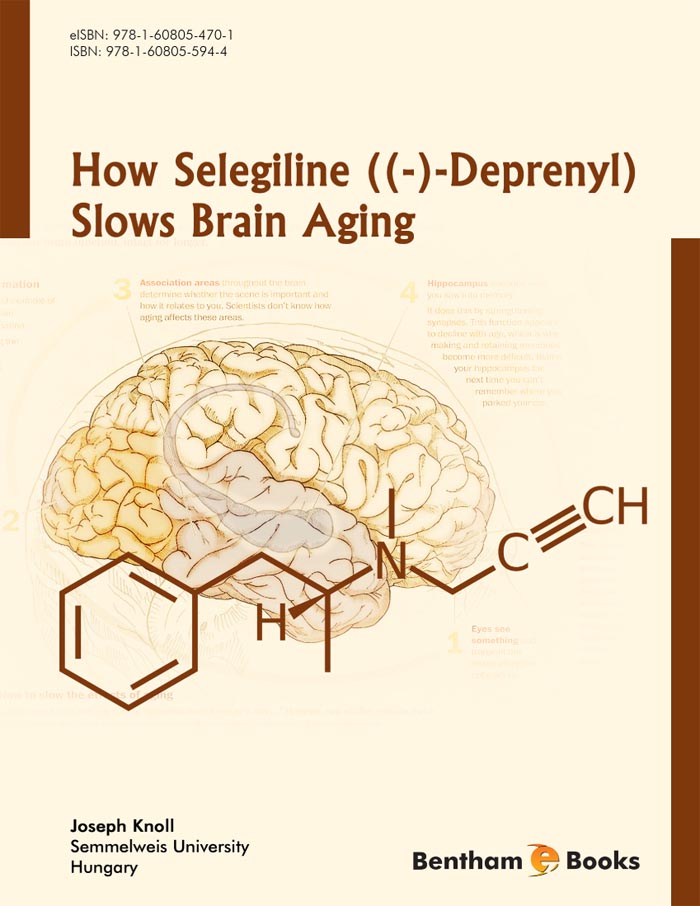 This e-book is a reference on Selegiline/(-)-Deprenyl effects on the brain. Selegiline, described in thousands of research papers, is registered in over 60 countries. At present, more than one hundred preparations containing selegiline circulate in the global market under different brand names. They are widely used in the treatment of Parkinson’s disease, Alzheimer’s disease, major depression and as a geroptotective / anti-aging drug.

(-)-Deprenyl/selegiline, the first selective inhibitor of B-type MAO which, in contrast to the known MAO inhibitors, did not potentiate the effect of tyramine but inhibited it. The compound could be combined with levodopa in Parkinson’s disease without signs of hypertensive reactions. The DATATOP study in the USA revealed that (-)-deprenyl delayed the onset of disability associated with early, otherwise untreated Parkinson’s disease. The age-related decay of the supply of the brain with phenylethylamine ( PEA), due to the progressive increase of MAO-B activity in the aging brain, and dopamine, due to the better than average decline of the dopaminergic neuronal activity during the postdevelopmental phase of life, are irresistible biochemical lesions of aging. The speed of deterioration of behavioral performances with the passing of time and longevity depends significantly on the pace of the worsening of these leasions. (-)-Deprenyl, Increasing the supply of the brain with PEA and dopamine, counteracts this aging process. Maintenance of male rats from sexual maturity until death on (-)-deprenyl delays the age-related loss of the capacity to ejaculate, slows the age-related decline of learning ability and prolongs life. In humans, maintenance from sexual maturity on (-)-deprenyl (1 mg daily) is, for the time being, the most promising prophylactic treatment to fight against the age-related decay of behavioral performances, prolonging life, and preventing or delaying the onset of age-related neurodegenerative diseases such as Parkinson’s and Alzheimer’s.

This e-book is a useful reference for graduate medical students, academic researchers in the field of neuropsychopharmacology, neurophysiology and gerontology and professional research groups in commercial organizations manufacturing selegiline preparations.

Deprenyl, developed in the early 1960s with the aim to combine the psychostimulant effect of PEA with the psychoenergetic effect of the MAO inhibitors, became world-wide known and used as the first selective inhibitor of B-type MAO, which did not block the activity of the intestinal A-type MAO, thus was free from the cheese-effect.

Further studies revealed that in low doses, which leave MAO activity unchanged, deprenyl is enhancing, via a previously unknown mechanism, the activity of the catecholaminergic neurons in the brain stem and this catecholaminergic activity enhancer (CAE) effect is the primarily important pharmacological effect of deprenyl.

The main aim of this book, which recapitulates a part of information included in my previously published monograph „The Brain and Its Self” (Springer, 2005), is to focus attention to the theoretical and practical importance to the enhancer-regulation in the brain. It summarizes experimental and clinical data in support to the proposal that the prophylactic administration of a CAE substance during postdevelopmental life could significantly slow the aging-related decay of behavioral performances, prolong life, and prevent or delay the onset of aging-related neurodegenerative diseases such as Parkinson’s and Alzheimer’s.E-250, later named deprenyl, was one of the newly synthetized compounds in a structure-activity-relationship study which we performed in the early 1960s with the aim to combine the psychostimulant effect of PEA with the psychoenergetic effect of the MAO inhibitors.