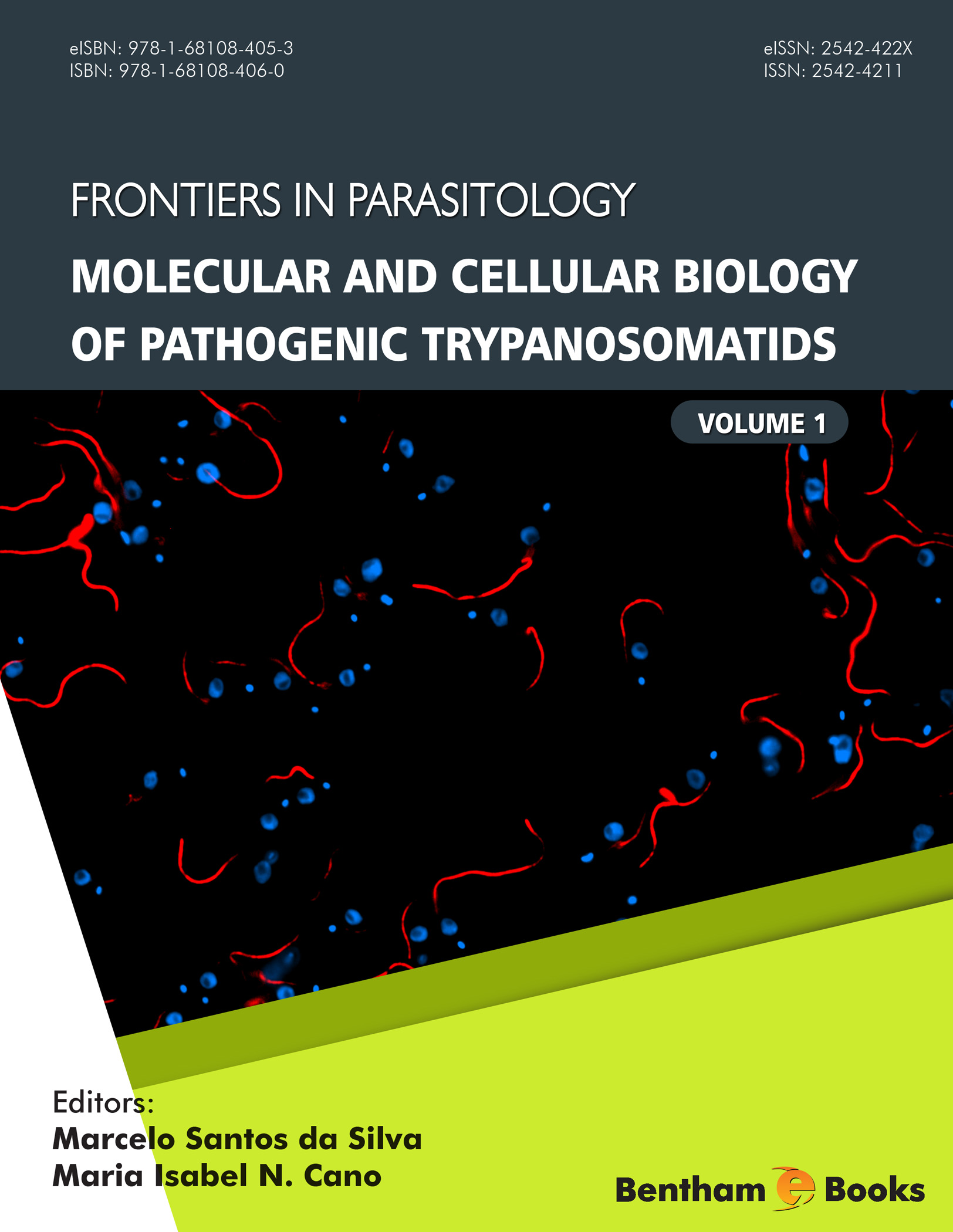 Every year millions of people living in tropical areas across the globe, are affected by trypanosomatids – the parasites causing Chagas disease, African trypanosomiasis, and leishmaniasis. According to WHO, these diseases are termed as neglected tropical diseases against which there are no effective vaccines and the few available treatments have many side effects, besides posing the risk of emerging drug resistant parasite strains. All these factors represent a significant challenge which imposes a considerable economic burden to public health systems. Many research initiatives have emerged in recent years with the aim to undercover parasitic molecular and cellular biology, parasite-host interactions, mechanisms of disease pathogenesis, molecular mechanisms of drug resistance, all essential for the development of novel anti-parasite treatments and eradication strategies.

This monograph will be of interest to undergraduates (premedical and biologists), graduates (masters and Ph.D. students) the parasitology research community and researchers working in related fields.

Since 1970, due to important financing programs, Brazilian scientists have been able to practice Biology while studying trypanosomatids, mainly Trypanosoma cruzi and Leishmania spp. The Annual Meeting in Caxambu since 1974, focusing on Trypanosoma cruzi at the beginning, and later extending the interest to other parasites, particularly Leishmania, were the catalysts of a scientific boom in Brazilian biology. Many young and enthusiastic students have been trained by the pioneers in the morphology, physiology, biochemistry, immunology and molecular biology of trypanosomatids, including vectorial transmission and clinical aspects of the diseases. The Caxambu meetings also brought to Brazil renowned scientists of the field who established important and long-lasting connections with Brazilians. After 2005, the field has gained momentum after the publication in Science of the complete genome of three species of the order Kinetoplastida, namely Leishmania major, Trypanosoma cruzi and Trypanosoma brucei. This e-book is a consequence of the Brazilian scientific activities in the field in the last 45 years. Maria Isabel Cano is my scientific grand-daughter and Marcelo Santos da Silva got his Ph.D. under her supervision.

The first chapter deals with the cellular organization of trypanosomatids during the life cycle. This group diverged early in evolution and due to this fact their members conserved certain characteristics not found in other eukaryotes as organelles like glycosomes, reservosomes and acidocalcisomes, among other cell compartments. Differences between species and between the distinct life cycle forms of each organism are comprehensively discussed.

Chapter 2 unveils the fascinating area of the trypanosomatid genomes. Information has been made available by the Tritryps project that provided major insights into the genome structure and organization of these parasites. While T. brucei presents subtelomeric expansion of genes related to antigenic variation, T. cruzi and Leishmania genomes contain species-specific genes related to cellular invasion and survival inside the mammalian host cells. As control of gene expression operates mainly at a post-transcriptional level in trypanosomatids, gene copy number variation is probably an efficient mechanism to enhance gene expression and increase sequence variability. Among the Tritryps, T. cruzi presents the most striking expansion of species-specific multigene families, which could be related to the ability of the parasite to infect any nucleated cell of a broad range of mammals. Chromosomal copy number variation is also well tolerated by these parasites, allowing the expansion of a whole set of genes simultaneously. The functional implications of these chromosomal expansions to the parasite biology are still to be determined.

Chapter 3 clarifies the function of chromosome ends and telomeres in trypanosomatid biology. These structures, in addition to the preservation of chromosomal integrity, play a major role in survival. The telomeric repeat (5'-TTAGGG-3')n is conserved among trypanosomatid species, but adjacent subtelomeric sequences vary between species and chromosomes within the same cell. For example, size and gene content of T. cruzi subtelomeres differ in each chromosome due to differences in the abundance and organization of these genes, whereas in Leishmania spp. subtelomeres show a more conserved organization.

Chapter 5 discusses mechanisms by which trypanosomatids maintain genome integrity and preserve faithful DNA replication despite multiple environmental aggressions. A growing body of evidence on how trypanosomatids recognize and repair damages is reviewed.

Chapter 6 explores one of the most fascinating features that make trypanosomatids unique organisms in the biological world. Despite being eukaryotic organisms they constitutively synthesize polycistronic mRNAs from separate gene clusters. Control of gene expression is not carried out at the DNA level but relies upon post-transcriptional mechanisms. This chapter aptly discusses the common post-transcriptional pathways for most genes, although many regulatory strategies within species of the group differ from each other. It is argued that these complex and diversified regulatory machineries allow rapid responses of these organisms to drastic environmental changes during their life cycle.

Chapters 7 and 8 describe virulence factors and the immune evasion in Leishmania spp and Trypanosoma cruzi, respectively. These parasites co-evolved with their hosts – mammalian and insects – for several millions of years and developed specialized strategies to evade the immune system by overcoming both innate and adaptive immune responses. The role of different species of molecules as virulence factors is discussed.

Diagnosis, chemotherapy, and potential recombinant vaccines are discussed in the ensuing chapters 9, 10 and 11, respectively. The diseases caused by kinetoplastids, called neglected diseases since they are predominant in poorer tropical countries having scarce resources, are responsible for thousands of deaths per year. No vaccines are available for these diseases. Presently, drug therapies are not very effective because the few available drugs are toxic, and treatment is costly. Comprehensively, methods of vector control are insufficient, despite the Southern Cone initiative in the nineties by which transmission of Trypanosoma cruzi in the domicile and outdoors by Triatoma infestans, at least in some countries, has been controlled. Chapter 9, stresses the need for reliable and specific diagnostic tests for epidemiological surveys, surveillance for vectorial transmission, blood screening, screening of pregnant women and their newborns, and in individual patients. The chapter summarizes the most commonly used molecular tools described to date to detect T. cruzi infection and to identify and genotype Leishmania spp. Chapter 10 discusses the present status of the chemotherapy area, emphasizing the screening assays that led to a few drugs reaching the stage of a clinical trial after a selection from millions of molecules tested. A milestone has been set for the year 2020, by the London Declaration: control of Chagas disease and leishmaniasis, and elimination of Human African Trypanosomiasis. Advances to achieve these goals are presented in this chapter. Finally, Chapter 11 deals with the research efforts on the development of recombinant vaccines against trypanosomatids, most of which are at the stage of preclinical experimentation. It is hoped that these efforts can be translated into efficient human vaccines.

This book is being edited in electronic form. In addition to the PDF edition accessible online, it will be aired in open access electronic media. Any reader can also have access to a printed version and also to individual chapters offered by the authors themselves. Thus, it is hoped that biologists, graduate students and post-doctoral researchers benefit with this up-to-date and competent review of the present literature on trypanosomatids.