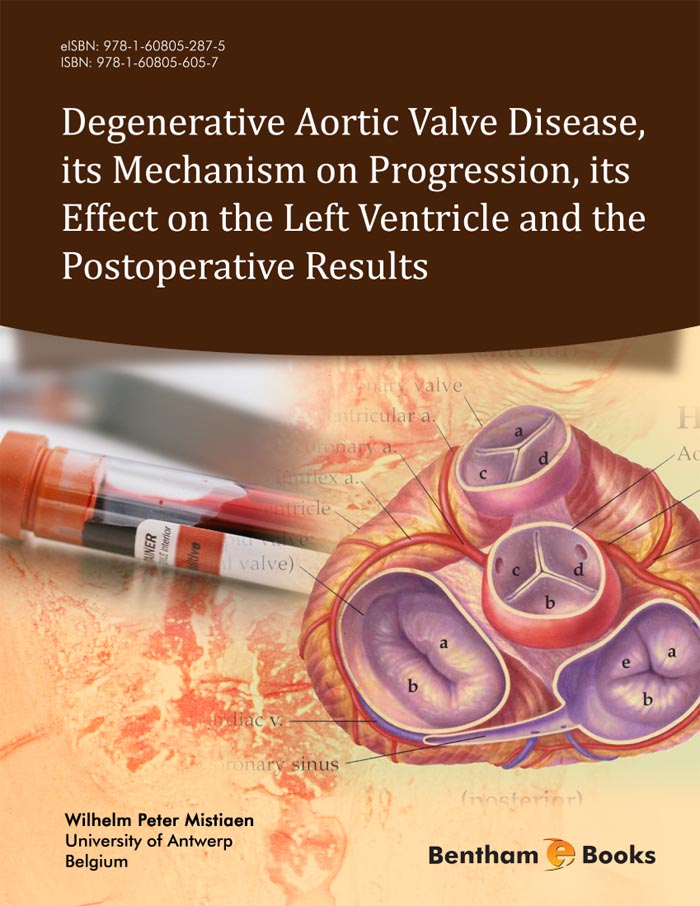 Degenerative Aortic Valve Disease, its Mechanism on Progression, its Effect on the Left Ventricle and the Postoperative Results

"Degenerative aortic valve disease is the most prominent cardiac valve disease in Western societies. This volume describes some of the more important issues and problems for this condition: its progressive character and the underlying mechanisms of this progression diagnostic difficulties 1) ascertainment of valvular origin of symptoms in elderly; 2) the challenge of the low output – low gradient syndrome; 3) moderate aortic valve calcification during CABG; 4) prediction of the rate of progression (who will need surgery on short term and who not). the burden on the left ventricle and its consequences (danger of postponement of surgery) the effect and the modalities (access, types of valves) of surgical treatment on survival (and QoL) the mode of registering postoperative complications determining predictors for valve related, non-valve related cardiac and non-cardiac postoperative complications. The e-book is a unique presentation, specific to degenerative aortic valve disease and its treatment including information about ways to deal with the progressive character of the disease (autophagy as a mode of cell death). Cardiologists still avoid or delay referring patients to the surgeon for the sake of age, left ventricular function or co-morbidity. Therefore, the e-book benefits readers by addressing the above issue and providing critical information for changing referral policy, which would ultimately enhance postoperative survival of patients suffering from heart valve disease."

Half a century ago, surgical treatment of calcified aortic valve disease has been introduced. This has been only possible by the development of the necessary imaging techniques, the extracorporeal circulation, the anesthetic procedures and the proper postoperative care. This operation turns an incurable and lethal disease into a manageable condition. This evolution, however has not been straightforward. The first biological devices failed quickly and the first mechanical devices have had a high rate of thromboembolism. Nevertheless, it is fruitful to look to the past and to watch the efforts, the failures and successes of those that have explored a yet unchartered field. The Ross procedure is such an example. After its introduction, it has become out of use because of postoperative problems, but it has been rediscovered afterwards. Currently, this procedure has its place in pediatric cardiac surgery. Following such developments, it feels as if one stands on the shoulder of giants.

Understanding aortic valve degeneration requires first a knowledge of the macroscopic and microscopic features of the normal aortic valve, which is offered in the first chapters. The development of the aortic valve degeneration is displayed as a three-layered phenomenon by Yetkin in 2009. The model is further developed in this manuscript. Many events and mechanisms have some degree of cross-talk, which makes the unraveling of this process very difficult. Congenitally bicuspid aortic valve has been excuded from this discussion, since it also involves the aortic wall. There has been hope that knowledge of risk factors and mechanisms of degenerative valve disease would lead to measures in preventing the progress of the disease. The results of the first patients series, in whom statins have been tried, seemed encouraging, but this could not be confirmed in recent trials presented by Chan and by Gerdts, both in 2010.

In the last decades, imaging has developed further: echocardiography and catheterization have been supplemented by computer tomography and magnetic resonance imaging. These modalities are helpful is solving difficult problems: the low-flow low-gradient conundrum, the moderate valve disease in patients referred primarily for CABG and the ascertaining of the valvular origin of symptoms in elderly patients. The use of stress echocardiography has become very useful in that respect.

The topic of medical treatment of aortic valve disease has not been covered in the manuscript. In truly asymptomatic patients, a watchful waiting could be advocated. Angiotensin converting enzyme inhibitors could have some beneficial effects. Once patients become symptomatic, prompt valve replacement is indicated. Patients with symptoms of doubtful origin are a challenge, however.

Once the decision has been made to replace the diseased aortic valve, the choice for the most appropriate prosthesis has to be made. Few randomized trials are available, however. The series of Stassano in 2009 is the only recent one. The choice for the valve depends on many factors, which can be derived from such trials. Age of the patient is one of the most important factors, but it is not the only one. The choice between different types of valves is a joint decision between the cardiologist, the cardiac surgeon and the patient.

In the last decades, more and more octogenarians have been referred for aortic valve replacement. The decision to operate upon such patients is not always an easy one. About ten years ago, Bouma and Iung pointed out that about one third of the patients is denied surgery unjustly and that referral patterns can vary greatly between cardiologists. Several criteria, including age, left ventricular function and the EuroSCORE have been applied for this purpose. The EuroSCORE, however, should be applied with great caution, since it overestimates hospital mortality in patients with a high risk. This problem is still relevant today and the conclusion of this chapter might help in the decision making.

Once the valve has been implanted, the patient needs thorough and life-long follow-up. The adverse events all need to be defined in advance and recorded in a proper way. For every event, risk factors and predictors need to be identified. This can be helpful in quality benchmarking and in future patient selection.

Recent developments also require attention: first, the development of tissue engineered heart valves and second the development of trans-catheter aortic valve implantation. The heart valve engineering has seemed promising, especially with the introduction of stem cells. But as recently as 2005, Vesely has pointed out that there is still a long way to go. Work on this subject, published in 2010 indicates that not all steps in the development of such devices have been unraveled. It might be that the “silver bullet” will never be found.

The implantation of aortic valves through catheters also seems a promising development. Leon et al. published a first randomized controlled trial in 2010 in which this procedure was compared to balloon aortic valvuloplasty. The trans-catheter implantation proved to be superior to valvuloplasty, but the complication rate was high. In 2011, a second RCT has been published by Smith et al. The results indicate to an non-inferiority of TAVI, compared to AVR. Use of the EuroSCORE should be used cautiously in the decision making for TAVI or conventional AVR.

These recent developments show that still a lot of work has to be done. Nevertheless, the ultimate goal, curing a valve disease by a procedure which does produce as minimal side effects as possible and by a device, which has the capacity to grow along and to repair and to remodel itself and thus requires no medication might be approached or even reached.

This works aims to summarize the main findings in the field of aortic valve disease and aortic valve replacement. The area, however, is vast and rapidly expanding. Many scientific manuscripst have appeared and continue to appear. It is therefore not possible to give a complete review.

I wish to express my gratitude to my wife, Collette Emwinomwan for her patience and endurance, while this manuscript has been written. Although she never involved herself in any medical practice, she was a source of inspiration. My gratitude also goes to my parents, David and Hanna, who taught me sound principles in this life.

This book is dedicated to my children, Rebecca, Dominic and Peter.