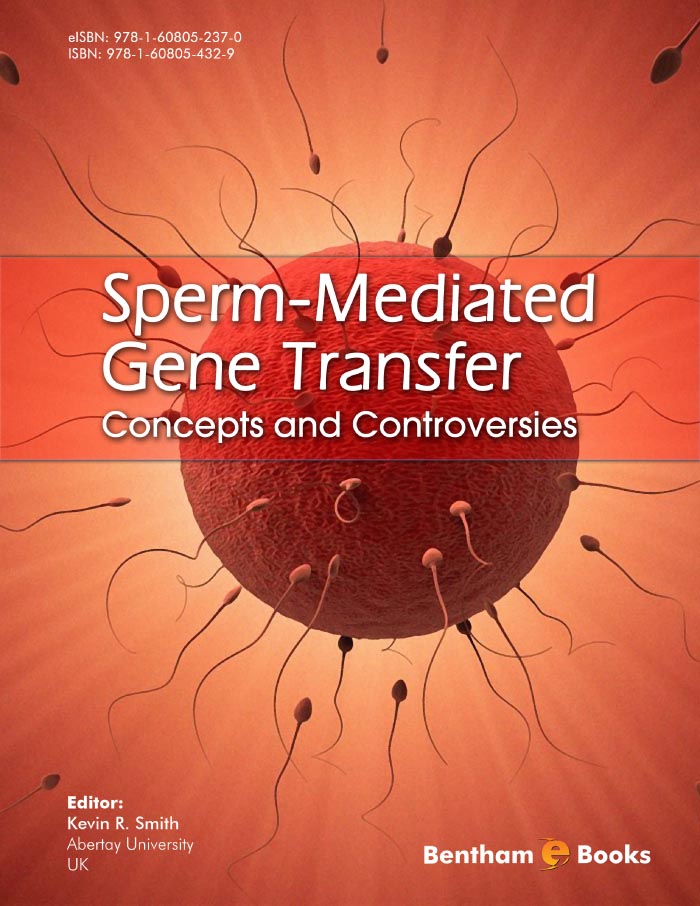 Sperm-mediated gene transfer (SMGT) represents a novel set of technologies for animal (or in the future, human) genetic modification using the sperm as a vector, as opposed to more traditional established routes such as fertilized eggs or embryonic stem cells.

Studies of sperm-mediated gene transfer (SMGT) indicate that sperm cells possess the ability to be utilized as carriers of exogenous genetic sequences, offering the potential of a novel cost-effective route for germline genetic modification. The fate of transgenes borne by sperm cells has been inconsistent, and analysis of offspring from SMGT experiments has shown a mixed picture in terms of genomic integration of the transgene, suggesting an episomal mode of inheritance. Various distinct steps in transgene uptake by the sperm cell have been described or proposed, including a model based upon endogenous reverse transcriptase activity. Although mature sperm cells are naturally protected against uptake of foreign nucleic acid molecules, certain environmental conditions, for example at key times within the reproductive tract, may reduce this protection, suggesting that SMGT may occasionally take place in nature. If correct, this carries profound implications for evolution and human genetic health. This e-book brings together theoretical and empirical reviews from experts in SMGT, providing comprehensive coverage of the major trends, developments and controversies in this novel field. This e-book is intended as a reference for professional researchers in the field of animal genetic modification (transgenesis) as well as teachers, scientists and physicians interested in medical genetics in general and gene therapy in particular.

As a young researcher in an established transgenic laboratory at Edinburgh University in 1989, I was struck by the effects of the publication in the journal Cell of a paper reporting that mammalian sperm could readily act as vectors for foreign DNA. Almost overnight, attention in our laboratory switched from established methods of transgenesis towards this exciting new prospect, and immediate efforts were made to replicate the Cell work. The talk at the time was that all the paraphernalia, training and expense of pronuclear microinjection (the standard approach) would be rendered redundant by this disruptive new technology, known as sperm-mediated gene transfer (SMGT). In the event, the original Cell work could not be replicated, either in our laboratory or in a number of laboratories worldwide that were similarly attempting to make SMGT work. This failure was experienced by many in the field of animal transgenesis as something of a body-blow. Researchers were genuinely very disappointed that SMGT manifestly did not deliver on its initial promise. A backlash followed, with a substantial amount of skepicism being directed towards both the Cell paper and also towards the fundamental biological notion that sperm could ever be expected to be able to act as transgene vectors. Almost as rapidly as interest in SMGT had exloded, most researchers abandoned their efforts towards getting sperm to carry foreign DNA. Nevertheless, a small, disparate array of transgenic scientists continued to work with sperm in the context of SMGT, either in the hope of establishing SMGT as a viable method for producing transgenic animals, or to address fundamental questions concerning interactions between sperm and exogenous nucleic acid molecules and the parameters influencing such activity. The outcome from such work has been as varied as the research purposes involved. Since the late 1980s, several significant papers describing sperm-DNA interactions have been published. For example, we are now much more knowledgeable about the fate of nucleic acids taken up by sperm; it has become clear that certain forms of augmentation, for instance the combination of DNA incubation with intracytoplasmic sperm injection (ICSI), permits a reliably high level of exogene uptake; and transgenic animal generation has been reported via highly novel forms of SMGT, including in vivo transgene injections into the male reproductive tract and the use of nanotechnology to deliver transgenes into sperm.

Yet many unanswered questions remain, and certain tensions exist within the body of empirical data and theory associated with SMGT. To what extent may horizontal (sperm-mediated) gene transfer occur in nature? To what extent do the models proposed to describe exogene uptake & integration reflect reality, and to what extent may such mechanisms generalise to all animals? Why have a few groups continued to report extremely impressive results for the generation of transgenic animals using the original unaugmented ('autouptake') SMGT methodology, where such results could not be replicated by other groups? And how do such positive reports fit with current theory (itself based on empirical research) that suggests sperm are unlikely to permanently harbour integrated transgenes following autouptake?

While such questions and controversies have yet to be fully answered or resolved, it can be stated with confidence that continued research in the context of SMGT has, at the very least, significantly expanded our understanding of sperm cellular and molecular biology. In addition, ongoing research into SMGT has kept alive the tantalising possibility that sperm have the potential to be routinely used for important genetic modification applications, including the generation of transgenic disease models, improved agricultural strains, transgenic bioreactors, xenotransplantation technology and perhaps even human gene therapy.

The contributors to this book elucidate a broad range of theoretical and empirical aspects of SMGT. The overall result is the construction of an intriguing picture of the diversity of potential applications and implications arising from the possible use of sperm as genetic vectors. A wide array of animal types is covered, ranging from invertebrates to large farm animals, and the range of SMGT augmentation methods described is similarly extensive. And the aforementioned controversial aspects of SMGT are evident in these writings.

This book, with its expert contributions, should allow the reader an unparalleled depth of insight into the concepts and controversies of SMGT. It remains to be seen whether the SMGT revolution promised by the publication of the 1989 Cell paper will ever materialise. But the reader will be left in no doubt as to the importance of SMGT to modern bioscience.