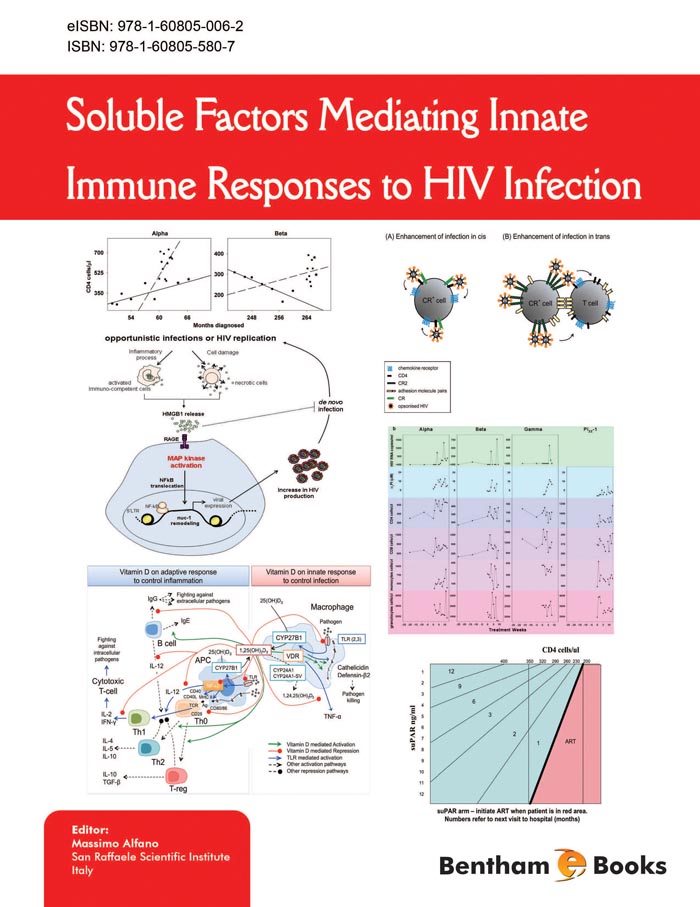 Human Immunodeficiency Virus (HIV) infection represents one of the biggest challenges of current years. However, scientists and physicians still do not have an efficient therapy for preventing or eradicating the virus. The selection of drug-resistant strains as well as side-effects, represent common problems encountered in all anti-viral therapies. However, it has been clearly demonstrated that the potency of early immune responses profoundly regulates levels of HIV, and hence also the generation of virus mutants as well as the velocity of disease progression to AIDS.

A prominent feature of this e-book is the focus on interaction between innate immunity and HIV infection. This topic has been investigated by many authors from the late 80's, and many soluble factors responsible for such activity have been discovered, such as suPAR and HMGB1. At present, these two novel factors are the subject of very intense research on HIV infections.

A key advantage of this e-book is the selection of authors, recognized worldwide as leading experts in their field. Because of the comprehensive coverage, as well as the eminence of the authors, this e-book provides a detailed and high quality description about the role of innate immune responses regulating HIV replication. It should prove to be a useful resource for readers interested in immunology and HIV research.

Human Immunodeficiency Virus (HIV) and AIDS pathogenesis have been under investigation for almost three decades. Substantial scientific and medical data have been collected on the structure of the virus and its replication cycle in infected cells. In addition, our understanding of the pathogenesis of HIV infection has greatly improved: It depends on virus-induced immune suppression as well as the formation of cellular virion reservoirs. The role of non-viral factors in AIDS pathogenesis was first identified 20 years ago with the description of soluble factors, the cytokines, which modulate HIV-1 replication in infected cells. Since then, more soluble factors have been discovered, capable of either stimulating or inhibiting HIV replication. Two critical anti-viral arms of HIV-specific CD8+ T cells (cytolytic and non-cytolytic) were shown to play a significant role in HIV prevention, and were associated with asymptomatic survival and slower disease progression. The activity of cytokines and their role in modulating HIV infection have been investigated in vitro and in vivo, both in animal models and human tissues such as gut and lymphoid tissue. Moreover, modalities of using cytokines as immunotherapy, either alone or in combination with anti-retrovirals, have been described. Leukocytes and epithelial cells produce defensins, which are innate effectors and immunomodulators during HIV infection, taking a variety of actions against microorganisms. They also act as immunomodulators involved in inflammation, tissue repair, and angiogenesis. Other soluble factors, such as the high mobility group box 1 (HMGB1) protein and urokinase plasminogen activator and its receptor (uPA/uPAR system), have a critical task between innate and adaptative immunity, and may possibly interfere with HIV-1 infection. Alpha 1-antitrypsin levels, which are deficient in HIV-1 disease, and rate-limiting for CD4+ T lymphocytes, could be a therapeutic target. Research for a better understanding of the role of vitamin D during HIV infection and disease progression to AIDS is ongoing. The complement system, a prominent component of the innate immunity, is likely to aid in the control of HIV replication, although the virus has developed escape mechanisms to avoid complement-mediated destruction.

Among the cells of the innate immune system, macrophages, NK cells, and dendritic cells (DC) have been shown to be actively involved in the defence against HIV infection. Many cellular and environmental factors influence viral replication in cells of the innate immune system. These factors include: status of cellular activation, macrophage or DC/T cell interaction, cytokines and chemokines, immune complexes, and opportunistic pathogens. The effects of soluble factors and the innate immune cells on HIV pathogenesis also depend on the localization of the immune cells. Regarding viral replication, cellular activation status, and expression of chemokine receptors on the cell surface, macrophages do not behave in the same manner as viral reservoirs in lymph nodes, intestinal tissue, lung, and central nervous system. Therefore, in addition to the adaptative immune system, a complex network of soluble factors and innate immune cells appears to be a critical component in disease development. A better understanding of the pivotal role played by soluble factors in mediating innate immune responses to HIV infection should ultimately enable the development of new antiretroviral treatments. These treatments would make it possible to target not only the virus but also to modify its cellular environment, leading to a more complete control of HIV replication.

The present book strategically places the soluble factors and innate immune cells at the forefront of AIDS pathogenesis. Reading this book is essential to the understanding of the future development of therapeutic approaches for HIV infection.