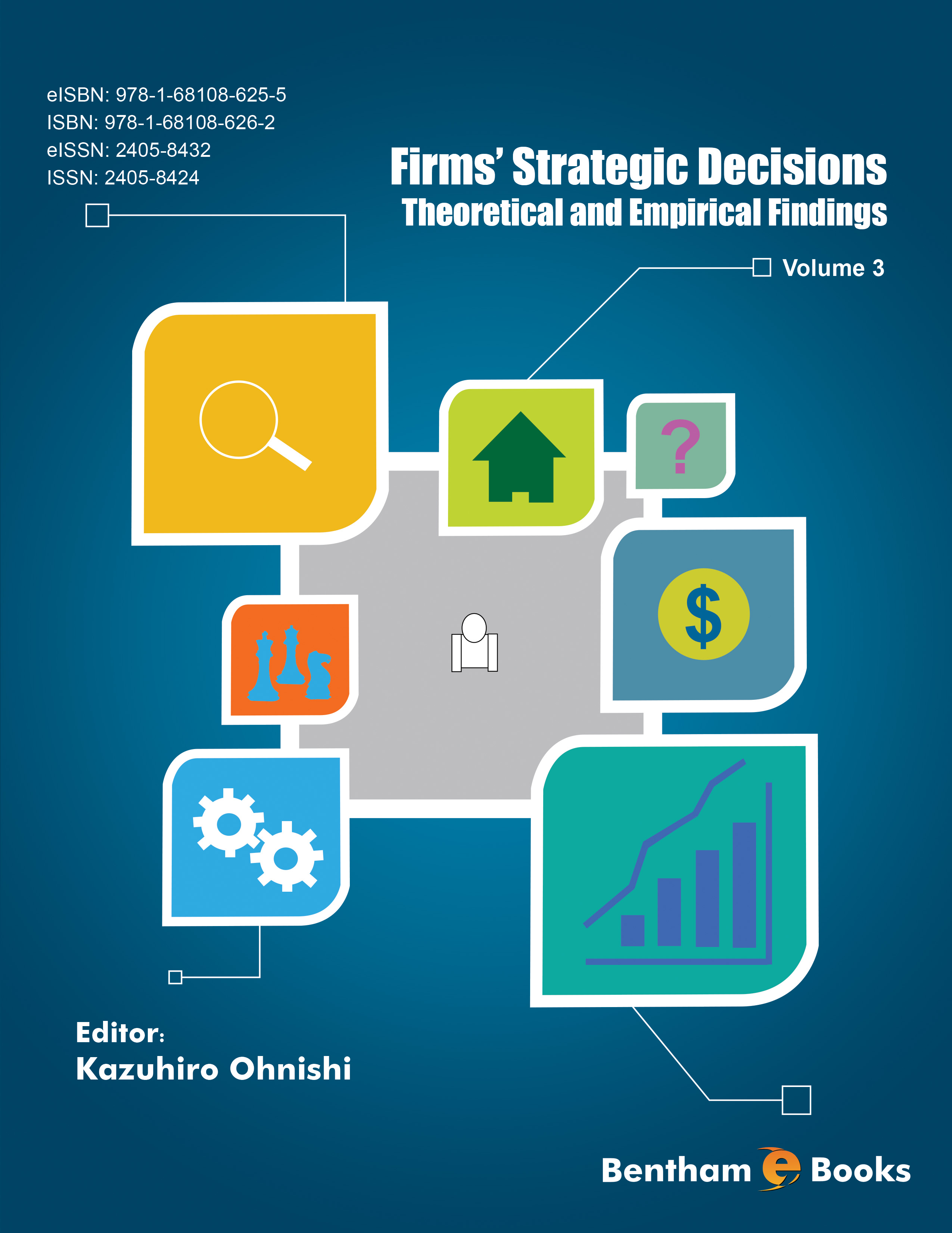 This volume of the series features 14 chapters covering theoretical and empirical research on strategic decision making of monopolistic and oligopolistic organizations. Topics covered in this volume include strategic behavior of different types of firms, identifying insiders in organizations, the relationship of employees’ green behavior with environmental sustainability, the relationship between firm size and export-intensities of manufacturing firms in India in a discriminating oligopoly model, and how industrial economics modeling can be particularly useful to analyze development issues in a context of food safety regulations. This volume is suitable for academics, students and professionals studying firm behavior in the fields of economics, business administration, policymaking and engineering.

This book contains important and significant findings of theoretical and empirical studies by many eminent researchers all over the world and is composed of fourteen chapters.

The first three chapters study firms’ strategic decisions based on the economic theory of profitmaximizing behavior.

Chapter 1 examines the two-part pricing problem of a risk-neutral monopoly (the seller) for a good sold to buyers who face uncertainty about their demand for the good. The chapter shows that the optimal unit price is higher or lower than the constant marginal cost, depending on the nature of the good (normal or inferior) and on the signs of cross-derivatives of buyers’ multivariate utility function. This chapter employs a quasi-linear specification that reduces the general multivariate utility function to a special univariate utility function, and shows that the seller optimally raises (lowers) the unit price and lowers (raises) the fixed fee from their risk-neutral counterparts if buyers’ total and marginal benefits are positively (negatively) correlated. The chapter further shows that these results are robust to the introduction of competition to the seller.

Chapter 2 considers oligopoly markets comprising profit-maximizing firms. There is a vast literature on non-cooperative oligopoly games. In this literature, however, the discount rates have been considered as fixed. Consequently, this chapter aims at understanding the effects of uncertainty over future discount rates on collusive behavior. Results indicate that the more uncertain the future discount rates are, the more collusive firms become. A higher average discount rate, on the other hand, is anti-collusive. With this kind of information at hand, policies that are targeted at reducing the variability in interest rates can promote competitive behavior by discouraging firms to behave collusively. Thus, the results can be of use for competition authorities and governmental bodies.

Chapter 3 addresses firms’ strategic decisions on Corporate Social Responsibility (CSR), focusing on the role of market structure and firm size as drivers of CSR. Do large firms invest more in CSR? Do firms in more concentrated markets invest more in CSR? A simple theoretical model with product and CSR competition is presented. This chapter finds that more competition increases the CSR investment and that the firm size also positively influences firms’ social responsibility. Size and market concentration thus contribute in different directions to CSR, which contradicts the usually presumed positive association between these variables.

Chapter 4 characterizes the socially optimal mix of firms in a duopoly with both profit-seeking and labor-managed firms. Firms’ activities generate a twofold externality: (i) production entails the exploitation of a common pool natural resource and (ii) production/consumption pollutes the environment. This chapter shows that it is always preferable to have at least one labor-managed firm in the industry, in view of its softer impact on environmental magnitudes. Moreover, if market size is large enough, a mixed duopoly is indeed the socially efficient industry configuration.

Chapter 7 examines the strategic interaction of two countries’ optimal choices of privatization and trade policies with different combinations of production subsidy and import tariff, and find some interesting policy implications. First, a higher social welfare can be achieved with the appropriate degree of privatization when both governments adopt a production subsidy only. Second, the free trade agreement can work as a coordination device to solve the prisoner’s dilemma problem. Third, the maximum-revenue privatization, combined with zero subsidy and higher tariff, is higher than optimum-welfare privatization. Finally, the international bilateral equilibrium needs less degree of privatization and lower subsidy rate, even though it is jointly suboptimal from the viewpoint of global welfare.

Chapter 8 answers the following question: Will the order of public firm’s moves affect the social efficiency of free entry in a mixed oligopoly market? This chapter first shows that in a closed economy, private entry is socially excessive regardless of the firm’s order of move. The chapter then shows that in an open economy, socially excessive of domestic private entry remains hold regardless of the firm’s order of move if the trade cost of foreign competitors is higher enough to deter foreign entry. The excessive entry results found in the presence of public firm and market leaders have important implications for anti-competitive regulation policy and policy coordination between domestic and foreign governments.

Chapter 10 examines the conundrums of avoidance of possible internet-based crimes (cyber crimes) against critical infrastructures. Critical infrastructure is an important element of the modern world: Every nation must defend the crucial government, transportation, financial, energy, information, and other critical infrastructure systems against terrorist attacks and earthy cataclysms. Information security occupies a special place in the list of human priorities. One of the primary objectives of this chapter is to prove the relevance of the problem, as well as describe probable phenomena and movements that could form a topic for further discussions and considerations in this area. The chapter’s main issue is the most vital due to the extreme dependability of financial bodies in the modern world that help accelerate the globalization processes involving the economies of all countries.

Chapter 11 uses the data envelopment analysis and Malmquist index, and analyzes how the Uruguay Round’s resolution on Agreement on Agriculture, which is a strategic decision making at the global level, has contributed to the strategic decision making in Asian agriculture at the national level. The empirical results reveal that the strategic decision making of trade liberalization at the national level has significantly contributed to growth in productivity and efficiency measures in Asian agriculture during the period of 1981 to 2012. Like the Kuznets hypothesis, an interesting inverted U-shaped movement of technical efficiency levels with trade liberalization has been observed, while the movement of technological change on trade openness comes as Ushaped.

Chapter 12 confirms that green human resource management (GHRM) significantly moderates the relationship of employees’ green behaviours with environmental sustainability. Organisations around the world are shifting from processes that exploit the environment towards those that are environmentally friendly. Going forward, researchers predict more research will illuminate the role of GHRM activities in enhancing and perhaps even driving environmental management initiatives. Such research reduces organisational degradation and contributes to the benefits of all stakeholders in the future.

Chapter 13 is an attempt to empirically examine the relationship between firm size and exportintensities of manufacturing firms in India in a discriminating oligopoly model. Using the unit level factory level data for the Indian economy for the year of 2009 from the Annual Survey of Industries, the chapter tests the propositions (1) firm level output and the marginal cost of the firm and (2) export share of the firm and the firm size being measured in terms of the fixed capital assets held by the firm. The chapter further examines if transport advantage in terms of costal location of the firms has any impact on the firm export.

Chapter 14 investigates how industrial economics modeling can be particularly useful to analyze development issues in the context of food safety regulations. The chapter shows how such a modeling is necessary to understand, in such a context, the evolution of vertical relations in the South supply chains, the mechanism of price formation in less-developed economies subject to food safety constraints, the evolution of supply (quantitatively and qualitatively), the food risk, etc. To answer the specific economic development issues associated with such a context, the chapter shows that it is necessary to revisit and modify the usual theoretical frameworks of industrial economics to take account of the multitude of actors in the supply chains, the multitude of typologies of marketing channels and the resulting strategic interactions.

Finally, I would like to express my sincere gratitude to the authors who have contributed to the chapters. I would also like to thank the staff members of Bentham Science Publishers, particularly Ms. Fariya Zulfiqar for the kind support and help.