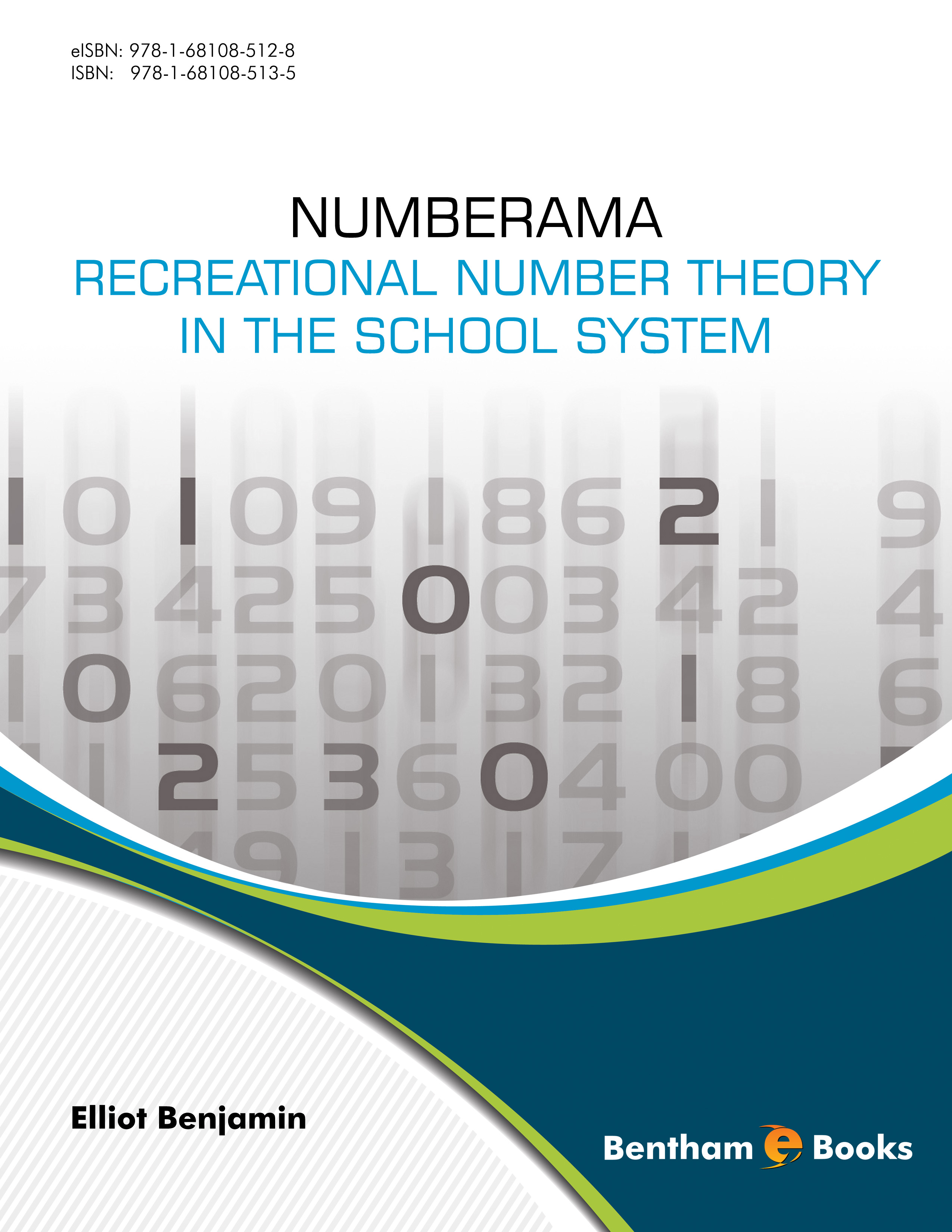 Numberama: Recreational Number Theory in the School System presents number patterns and mathematical formulas that can be taught to children in schools. The number theories and problems are reinforced by enjoyable games that children can play to enhance their learning in a fun-loving way. Key features of the book include:

This book is a useful handbook for elementary and middle-school teachers, students, and parents who will be able to experience the inherent joys brought by teaching number theory to children in a recreational way.

The book under review is a typical pedagogical and informative book. The mission of this book is to encourage students to appreciate mathematics, especially number theory. As an expert in number theory, the author applies in a pleasant way, and laboriously, his theoretical experience, to present several problems of number theory as simply as possible, in order that all students can easily understand all steps of solutions of given problems. This book is partitioned into four chapters and an appendix. In chapter 1, several basic problems in number theory are given, by using elementary arithmetic operations, the author introduces these problems in a good and simple manner. Chapters 2, 3, and 4 consist of a series of 19 games based upon the ideas from recreational number theory introduced in chapter 1, with each chapter requiring successively higher arithmetic skills for children to play the games included in chapter 1. These games hone the skills of the students, involving many of the properties of numbers given in the first chapter. Several interesting fundamental problems are listed in these chapters. For example, the cardinal of the set of all subsets of a given set, the set of prime numbers; so here, the students can understand that this set is infinite and there is no logic of their distributions. We can also cite Fibonacci numbers, perfect numbers and some serious yet interesting problems going back to antiquity, as Diophantine equations, especially whether positive integers can be written as the sum of two squares of integers. To introduce all these fundamental problems, the author presents a code indicating the level of skills needed to work on at least parts of the problems. Teachers are given plenty of advice as to how to present the material to the students. The Appendix includes excerpts from various student and teacher participants in Dr. Benjamin's Numberama program, which describes both the benefits and the joy they received from participating in this program.

I think that this book will be a reference for students and i recommend it for teachers, in order to introduce number theory in easy manner and by improving students’ mathematical knowledge.

The book Numberama: Recreational Number Theory in the School System, published in Bentham publishers - Sharjah, UAE, by Elliot Benjamin, is meaningful and not hard to read for elementary and secondary school teachers, and should be available in learning management in training school to help trained teachers to build didactic situation so as to develop different abilities linked to Number theory.

In the introduction, the author provides readers with sufficient background information about Numberama, and he specified the motivation and the objective for his work. He particularly gives an introduction concerning the games developed in Chapters 2, 3, 4, related to problems proposed in chapter 1, and he claims that many of them have been played by elementary school teachers. The author has devoted the first chapter to "Recreational Number Theory Problems". Meanwhile, chapters 2, 3, 4 are reserved to learning by games. The objective of each chapter and each section is clearly defined, and the learning instructions to implement the situations or playing games are appropriate. all the games are based on the ideas from recreational number theory introduced in the first chapter. In this chapter, he presented 55 problems, some of which have been implemented through stages, and sometimes, the author, gives the algebraic formula as in problem 1, problem 13, problem 15, problem 19, problem 41, problem 45. The methods suggested are presented in appropriate format and the results are clearly explained. On the other hand, we conclude from the many participants' responses to the questionnaire designed for the Numberama Program, that the students and teachers are fully satisfied.

The first system of mathematical education that we know of was developed by the Babylonians about 5000 years ago. Their scribes were taught how to read, write and do simple arithmetic in connection with taxes, the size of land or the fair division of inheritance. Quickly the teachers discovered the joy of solving sophisticated problems that were not related directly to applications, such as first integral solutions like 1192 + 1202 = 1692 to what we call the Pythagorean equation. The Greeks developed a whole new branch of “pure” mathematics, for which they are still admired today. The Romans, on the other hand, were only interested in applied mathematics, and if they have secured themselves a place in the history of mathematics then only because it was a Roman soldier who slew the greatest scientist of antiquity, Archimedes. Today, the systems of education in most Western countries have been hijacked by “Romans”: The Theorem of Pythagoras is not taught because it allows students to perceive the beauty of mathematics and the fundamental role of proofs, but because you can apply it to the computation of the length of a broomstick that fits into a cabinet or of the length of the diagonal of a bandana for your dog. A quick comparison of the problems in modern textbooks, filled with uncountably many irrelevant colored pictures, and the ingenious compositions of problems related to the Pythagorean Theorem that the ancient Babylonians, Chinese and Hindus created, will immediately reveal how dull and dreary the books we have to use in school nowadays are.

Benjamin’s book Numberama is not of the “Roman” kind: There are no colored pictures at all, no inane “applications”, and there is no flogging the dead horse of school mathematics with the shtick “Math is everywhere!”. Instead, the author is trying to convey the enjoyment of doing mathematics. “As a child I enjoyed adding numbers in my head”, Benjamin writes. This is something you will not find in the textbooks of the didactics of mathematics that have been written in the last 40 years. The mantra of modern pedagogy is that all calculations are boring the hell out of kids (as a matter of fact they don’t, but at least in Germany many people working in science of education have never taught a single child) and are best done by typing the problem into a calculator. Mathieu Ossendrijver has recently deciphered a fragment of a clay tablet on which some Babylonian scribe computed 946 (or rather verified the result by dividing the number repeatedly by 9 until he reached 1. Clearly the Babylonians had no application for the sexagesimal value of such a large number; they performed such calculations out of fun or because they were proud of their mathematical accomplishments or their education. Computing numbers as large as 946 (whether in the decimal or in the sexagesimal system) is a challenging problem; typing it into a computer algebra system is an exercise devoid of any meaning and is as interesting as solving a sudoku puzzle by downloading an app that does it for you. Technology has its place in mathematics, but forcing its use in the early stages of education is like teaching children to drive a car before they can walk. Hats off to Benjamin, who does not fall into this trap. His games (board games involving rolling dice or drawing number cards) demand mental calculations.

Benjamin’s collection of recreational number theory problems stands in the tradition of Alcuin of York’s Propositiones ad acuendos iuvenes (problems to sharpen the young), Bachet de Meriziac’s Problemes plaisans et delectables, qui se font par nombres or Edouard Lucas’s Recreations mathematiques, and the idea of playing games requiring arithmetic skills is reminiscent of the game Rithmomachia, which was played between the 11th and 17th century in Europe and, during its heyday, rivaled chess in popularity. Benjamin’s games and activities are based on triangular and square numbers, prime numbers, perfect and amicable numbers and magic squares, all of which go back at least 2000 years – these are mathematical objects that are timeless by definition. Other kinds of numbers (abundant and deficient numbers, Fibonacci numbers, Lucas numbers, Kaprekar numbers etc.), concepts (congruences and clock arithmetic) and problems (sums of two and four squares or Goldbach’s conjecture) are more recent. The feature of this book that I like most is the philosophy behind it. We do not solve sudokus or crossword puzzles because this is a useful activity, we do it because it is challenging or entertaining or because we are bored (which is a good thing – Weil discovered his famous conjectures when, feeling bored and depressed, he started reading Gauss). Books such as Numberama that emphasize the fun of doing mathematics or of performing calculations are extremely rare these days. I strongly recommend this book to anyone who believes in teaching as guiding children and working with them instead of just watching them struggle with their problems.