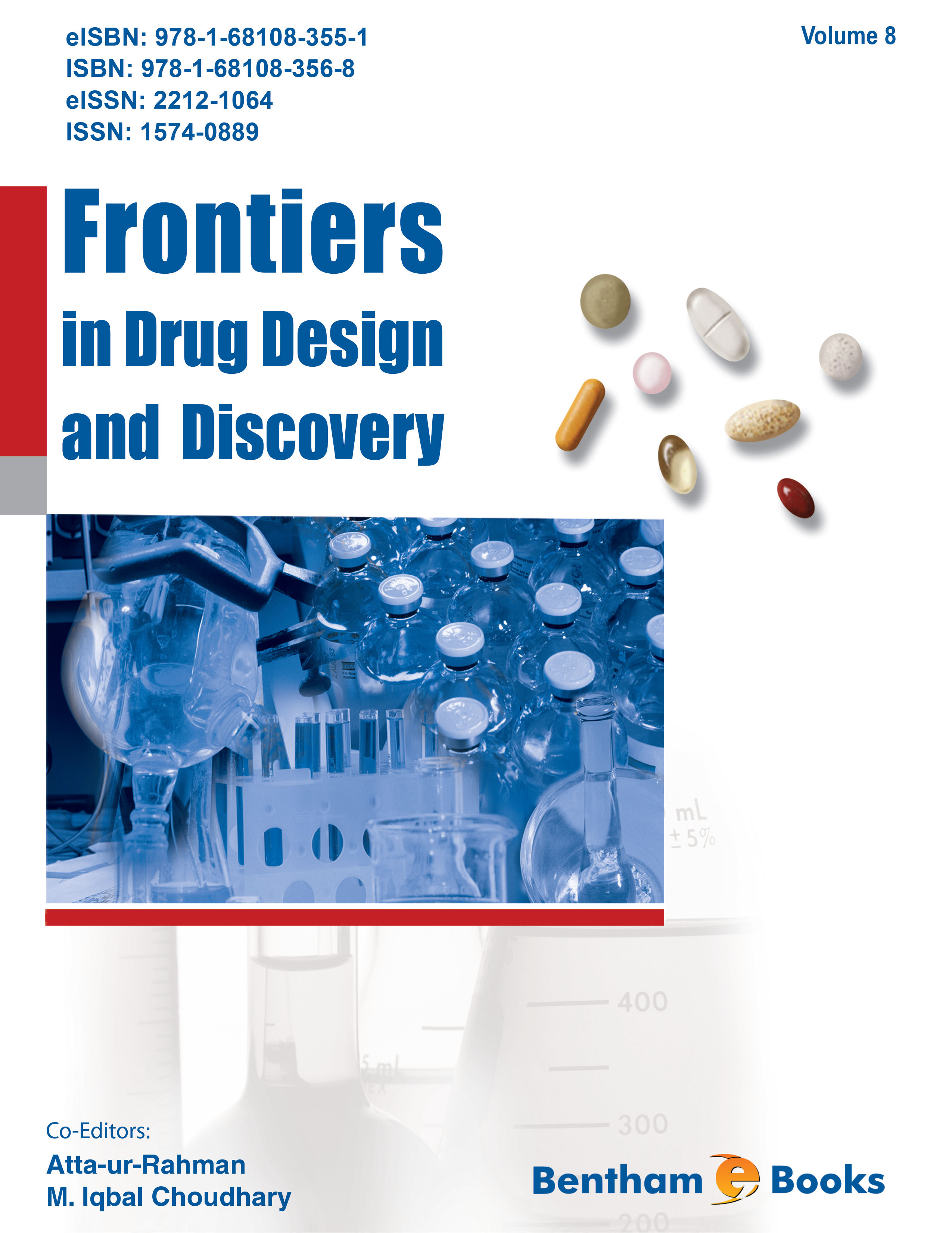 Frontiers in Drug Design and Discovery

Frontiers in Drug Design and Discovery is a book series devoted to publishing the latest and the most important advances in drug design and discovery. Eminent scientists have contributed chapters focused on all areas of rational drug design and drug discovery including medicinal chemistry, in-silico drug design, combinatorial chemistry, high-throughput screening, drug targets, and structure-activity relationships. This book series should prove to be of interest to all pharmaceutical scientists who are involved in research in drug design and discovery and who wish to keep abreast of rapid and important developments in the field.

The eight volume of this series brings together reviews covering chemotherapeutic agents and biopolymers.

Topics included in this volume are:

Drug discovery and development against prevailing and emerging diseases is one of the most important areas of modern health care research. This interdisciplinary area requires consistent well coordinated efforts of scientists with diverse expertise. It starts from target identification that underlies a particular disease process. It often takes years of study in order to characterize the targets for a potential drug. Once a receptor target has been characterized and validated, the most challenging task of identifying appropriate ligands from natural or synthetic sources begins. The study of the biochemical mechanism of the receptor-ligand interaction is the next step in this process. Often the ligands need to be modified to achieve greater specificity and affinity, requiring skills of medicinal chemists. This is followed by pre-clinical and clinical studies for safety, efficacy and specificity, often leading to frustrating failures, and re-initiation of the whole process. Finally, there are other considerations in the development of new drugs, termed ADMET (absorption, desorption, metabolism, excretion, and toxicity). Despite the challenges associated with the drug discovery and development, it is a fascinating and much needed scientific research which continues unabated.

The 8th volume of the ebook series entitled, “Frontiers in Drug Design and Discovery”, is a compilation of five exhaustively written reviews focussing on various aspects of drug discovery and development in key therapeutic areas. These reviews provide a wealth of information about topics of great interest in this field.

Parmer et al., have contributed a comprehensive review on the development of new chemotherapautic agents against haematological cancers. Hematological malignancies are among the most common cancer types. They affect the blood and lymph systems and include chronic and acute leukaemia, non-Hodgkin lymphoma, Hodgkin lymphoma, and multiple myeloma. There has been a major gap between the needs of treatment for haematological cancers and the current pace of drug development in this field. The authors have skilfully dealt with the subject by highlighting major developments in this important area along with pharmacology, pharmacokinetics, and clinical studies on various classes of drugs, including targeted therapies.

In chapter 2, Rowe et al. review the recent literature on the current developments in the management of esophageal carcinoma. The review begins with the description of two major types of esophageal carcinoma i.e. squamous cell carcinoma and adenocarcinoma. Different therapeutic interventions at various stages of esophageal carcinoma, as well as the health status and age of patients are described. This review presents treatment options for squamous cell cancer such as chemotherapy and radiation therapy as the first lines of treatment followed by surgery. Studies showing that chemoradiotherapy before surgery is better than surgery alone are presented. For adenocarcinoma, the most common treatment is chemotherapy and radiation therapy, followed by surgery. For advanced stage esophageal cancer, chemotherapy and radiation therapy remain the only options. Most importantly, the review describes advances in endoscopic treatments of early stage esophageal cancers such as endoscopic mucosal resection (EMR), endoscopic submucosal dissection (ESD) as well as endoscopic ablation procedures, including photodynamic therapy (PDT) and radio frequency ablation (RFA). These advances have proven to be safe and effective for the treatment of esophageal dysplasia and early stage neoplasia.

Androgen hormones stimulate prostate cancer cells to grow faster. The most important among them are testosterone and dihydrotestosterone (DHT). Lowering androgen levels or stopping them from getting into prostate cancer cells have been used to slow down the growth of prostate cancers. This is called androgen deprivation therapy (ADT). However, there are a lot of controversies associated with ADT. Tai et al in chapter 3 have reviewed past uses, and recent scientific evidences concerning the ADT in the treatment of prostate cancer. Current trends of the use of ADT in combination with radiotherapy to avoid recurrence of cancer are discussed.

Secondary metabolites from natural sources such as plants, microorganisms, and marine organisms have played an important role in world’s healthcare systems from ancient times till to date. Many cancer chemotherapeutic drugs have been obtained from nature and modified for optimal activity and safety. As cancers continue to take heavy toll of human life, the search for natural products with anti-neoplastic activities has continued in recent years with large scale screenings of marine fauna and flora, terrestrial microorganisms and plants in many laboratories of the world. Several new classes of natural products and their derivatives have been developed with the potential to be used as cancer chemotherapeutic agents. Lakshmi et al. comprehensively review the most notable discoveries of anti-cancer natural products in the last 5 decades in chapter 4. Most importantly, they describe the mechanism of action of key classes of natural anti-cancer agents at molecular levels, such as inhibition of enzymes and signalling pathways. The structure-activity relationships and results of pre-clinical studies add further value to this chapter.

Finally, chapter 5 by Kurcok et al is focussed on the tremendous new and well known biomedical and pharmaceutical applications of natural biopolymers, polyhydroxyalkanoates (PHAs). These natural linear polyesters are produced intercellularly by various species of bacteria through the fermentation of sugars or lipids. Many PHAs have also been prepared by chemical synthesis. PHAs are generally biocompatible and biodegradable in nature, and are used in the production of bioplastics. PHAs and their copolymers have found extensive applications in biomedical systems, including tissue engineering, orthopaedic materials, drug-loaded implants, drug careers, transdermal administration drugs and cosmetics, etc. Recent research studies on the conjugation of drugs with low molecular weight PHAs have shown to improve the bioavailability and safety profiles of drugs.

The above chapters are contributed by leading researchers and experts in the fields making volume 8 of the Frontiers in Drug Design and Discovery an interesting and useful reading for both young and established scientists, as well as students of biomedical and health sciences, and medicinal and pharmaceutical chemistry. We wish to express our gratitude to them for their excellent scholarly contributions for this reputed ebook series. We also greatly appreciate the efforts of the entire team of Bentham Science Publishers for efficient and timely processing of the publication. The skills, efforts and commitment of Mr. Omer Shafi (Assistant Manager Publications), Mr. Shehzad Naqvi (Manager Publications) and leadership of Mr. Mahmood Alam (Director Publications) are especially praiseworthy. We also hope that like the previous volumes of this internationally recognized book series, volume 8 will also receive wide readership, and appreciation.