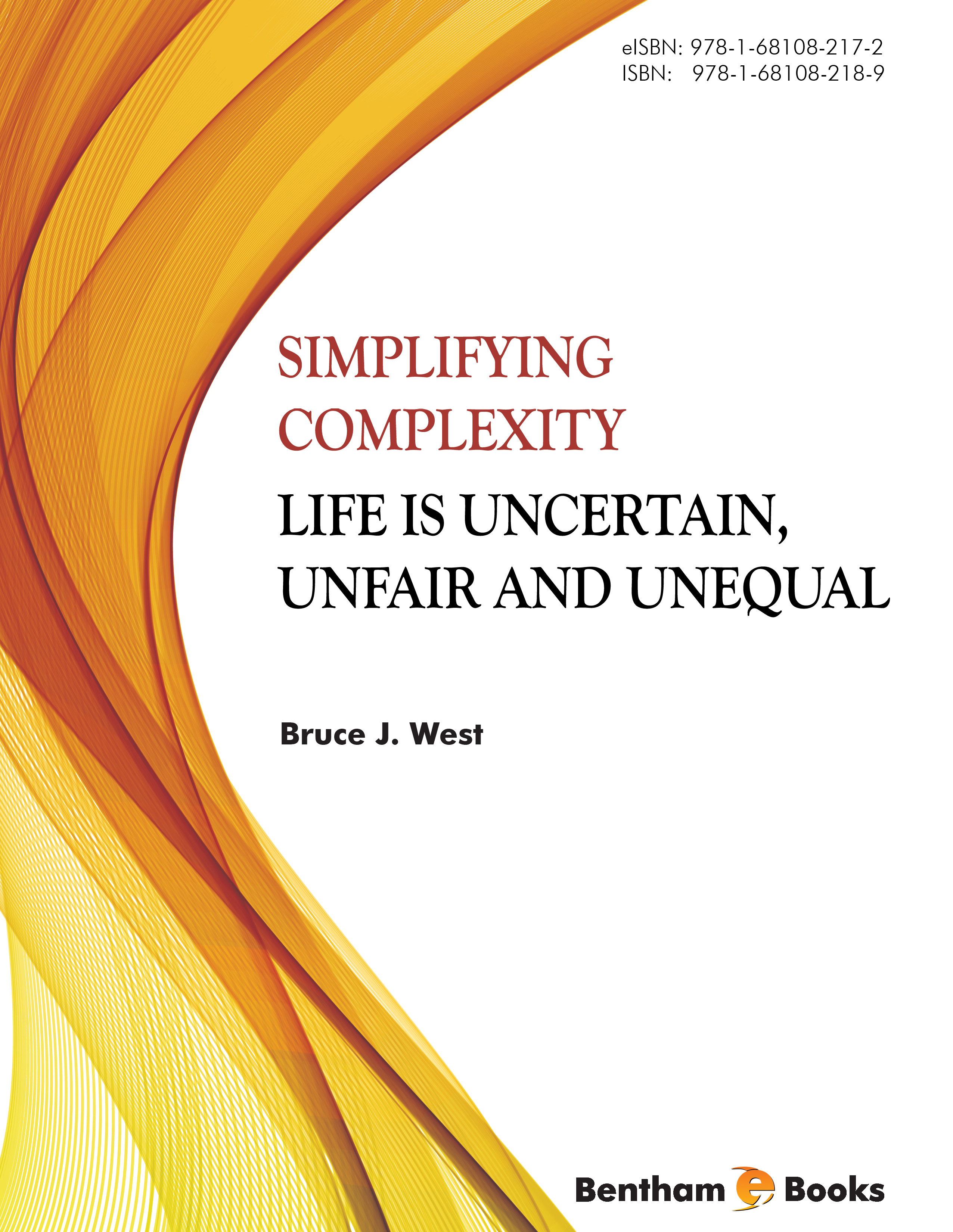 In life, we often face unavoidable complexities in terms of our ability to understand or influence outcomes. Some questions which arise due to these complexities are: Why can’t the future be made certain? Why do the some people or events always end up at the center of controversy? Why do only a select few get ahead of their peers? Each question pertains to three central elements of complexities and these elements are: uncertainty, inequality and unfairness.

Simplifying Complexity explains the scientific study of complex cognitive networks, as well as the methods scientists use to parse difficult problems into manageable pieces. Readers are introduced to scientific methodology and thought processes, followed by a discourse on perspectives on the three elements of complexity through concepts such as normal and non-normal statistics, scaling and complexity management.

Simplifying Complexity combines basic cognitive science and scientific philosophy for both advanced students (in the fields of sociology, cognitive science, complex networks and change management) and for general readers looking for a more scientific guide to understanding and managing the nature of change in a complex world.

We in Western culture like to believe the world, especially its human corner, is a reason-driven place. We perceive the universe to operate in accordance with fixed laws. For most of us, science has caught up to, if not replaced, religion as a primary mover. The urge to seek and excavate nature’s operating rules dates back more than a millennia, inspired by Aristotle and codified into the scientific method by Roger Bacon. People trust in the scientific method partly because we trust scientists to bracket off their initial biases so that they may engage in a uniform system of inquiry.

But what if scientists are unable to bracket off initial biases? What if cognitive biases about the world are actually built into the way science is conducted? If so, then empirical results are not wholly objective, but instead are partially rigged from the start. And what if the population at large unwittingly shares in these biases, often without realizing it?

This is precisely the state of affairs Bruce West reveals in his ground breaking book, Simplifying Complexity. In order to test hypotheses empirically, all research, no matter what the discipline, is shaped and even driven by the framework of its underlying mathematics. As West suggests, scientists’ choice of mathematics goes hand-in-hand with their underlying “cognitive maps” that color reality according to various unconscious slants. These cognitive maps are necessary, for their facts and presumptions allow us to simplify the incredible complexity that surrounds us, so that we may function with purpose and free from overwhelm.

For centuries, Western science has relied primarily on linear statistics, whose “normal” bell-shaped curve and regression to the mean yield strong central tendencies. The normal distribution characteristic of linear statistics operates by collapsing variability to a point in the middle, which is then used to characterize the whole. In conjunction with Newtonian mechanics, linear statistics paint nature and her contents in clockwork fashion. Just like the mechanism of a clock can be disassembled and reassembled without surprise, under the influence of linear statistics, so too does Newton and Laplace’s world move predictably in small, additive steps. The resulting statistics give the universe the appearance of being both fair and equal. In general, this choice of mathematics serves to tame nature’s wild, uncertain, unpredictable, and unjust side.

West likens the mathematics a scientist selects as the formal medium for experimentation to an artist’s choice of medium for self-expression. In both science and art, the medium conveys the message, as Marshall McLuhan would claim. Yet, the clockwork picture supported by linear mathematics is only one, highly simplified view of the world—one which easily leads to confusion. As a child raised in the 1960s, I recall learning an important statistic: the “norm” for the number of children growing up in families in the United States was said to be 2.5. Being rather literal-minded, I found it hard to wrap my mind around this notion. What exactly does it mean to have 2.5 children? When it comes to real families, it seemed to me that no one had 2.5 children. Looking back, I can see that wrestling with these ideas presaged my current interest in nonlinear science.

As West explains, we easily take for granted the story created by our mathematics of choice, largely due to familiarity. Normal statistics work well for sampling height or weight in the general population, because variability among people is relatively small; differences are additive; and underlying elements remain independent from one another. Yet, these conditions do not apply to most complex systems as they operate in the real world. Most natural distributions show wide spreads that include extreme if not catastrophic events. Indeed, catastrophic events occur far more often than most of us would like to believe. In general, nonlinear statistics reveal nature’s wild side—her uncertain jolts, abrupt transitions, unpredictable turns, and dynamic variability in general.

With respect to real people in the real world, life is not clockwork nor is it mechanical, and families are not normative. Some people have 1 child; others have 10. When taking into consideration generation after generation that precedes the current one, each family looks different. The more families we sample, the greater the variability we find. Life thrives on variability. And the faster contemporary society changes with the advent of new technology and communication devices, the more dynamic the surrounding variability. Through nonlinear lenses, variability is the new norm, and for this reason, the time is right to shift our cognitive maps.

In this book, West presents a different kind of metric with which to understand nature’s complexity and refine our underlying assumptions about the world. He offers nonlinear statistics that capture variability in the distributions of objects in space as well as events in time. In contrast with linear statistics that apply primarily to simple systems whose constituents are independently organized, nonlinear statistics apply to complex systems whose interdependent elements shift in multiplicative or exponential ways. This type of statistic goes by several names—1/f distributions, inverse power laws, pink noise, Pareto’s law. West outlines as many as 9 different mechanisms giving rise to similar surface distributions.

One consequence of variability at the heart of such distributions is the importance that extreme events take. This is consistent with how the human mind works: we hardly take notice of tiny fluctuations in ordinary life, but do pay attention to extremes. Every time I successfully pull my car out of the garage, it is a non-event; meanwhile, the time I smash the side of my car is the single instance that matters most. Society at large works the same way. Consider the stock market: minor fluctuations hardly make the news, but a market crash carries reverberations for years, if not decades, to come.

We human beings are complex creatures. Our brains have more interconnections among their neurons than the entire number of atoms in the universe. Our brains teeter on the edge of chaos, displaying some amount of order, yet enough variability for quick adaptation to an ever-changing environment. As West demonstrates, there is even variability at the center of our beating hearts—quite literally. Whereas traditional Western medicine asserts health in the form of predictable stability and regularity, when examined at the micro level, the dynamics of a beating heart reveal quite the opposite state of affairs. In between each and every heart beat is a tiny bit of variability that keeps us resilient and healthy.

This kind of variability is the stuff of life. As a clinical psychologist, I am steeped in it. I have probably seen hundreds of depressed people in the course of my 30+ year career. While linear statistics might put them all in the same diagnostic box, to me in real life, no two have ever looked exactly alike. Indeed, if they did, I would have been bored out of my mind and not skilled enough to treat them. The closer I look at each person—whether depressed or not—the more unique that individual appears. Welcome to the realm of the nonlinear.

As you turn the pages ahead, prepare to go through Alice’s rabbit hole. For once you understand the characteristics of nonlinear statistical distributions, some ordinary assumptions about certainty, fairness, and equality in the world will be turned upside down. When it comes to being complex systems living in a highly complex, interdependent world, dynamics are ever-changing and the future is uncertain. We may use tricks like distraction or mindful awareness to tolerate the anxieties and preoccupations that living with ambiguities and uncertainties entails. Meanwhile, the democratic ideal of everyone having a fair and equal shot at becoming rich, famous, or President, is statistically opposite to the real state of affairs. The rich keep getting richer; the poor keep getting poorer; those already famous keep getting more famous; while scientists whose work is most cited will keep getting more credit, even if they had little to no hand in the underlying research.

From my perspective as a psychotherapist, the linear version of the world appears to be a nice fairy-tale people paint to ease the scariness, unfairness, and inherent injustice of life. To me, this cognitive map of the universe is akin to how parents appear to young children—bringing up the sun and moon and in control over everything. The illusion of certainty and control yields a safe and predictable world that protects little ones from harm and worry. Perhaps this naïve story of our environment, both inside and outside, serves a similar purpose within the developmental trajectory of science. Maybe during the early phases of scientific exploration, scientists similarly needed to keep things simple, by warding off the highly complex and unpredictable side of life.

West’s book teaches us an important lesson: it is time for humankind to grow up and wipe the fairy dust from our metaphorical eyes. Simplifying Complexity reveals fascinating facts that connect separate disciplines with the same underlying mathematics. West even introduces a candidate for the first universal principle to govern the interaction of complex systems. West’s complexity management cube applies to diverse phenomena—from habituation in a brain that encounters a strong smell to the de-habituation in a brain that becomes riveted on a beautiful piece of classical music. His new principle even addresses issues related to modern warfare and global warming, at points to yield surprising, if not controversial, results.

Most of us have been so thoroughly steeped in linear, reductionist assumptions about how the world works, we act like fish happily swimming in the calm waters of our protected bowls, oblivious to the turbulent waters in the real world outside. But we can’t live in isolated environments (including ivory towers) forever. Just as it is dangerous to remain a child sheathed in the false comfort of a predictable, controllable, and fair future, so too is it dangerous to remain naïve about nature’s implicit inequities and injustices. By understanding nature’s true complexity, as rendered transparent by West (impressively without the use of a single mathematical equation), we prepare ourselves to address the complex problems we each face, both individually and collectively.