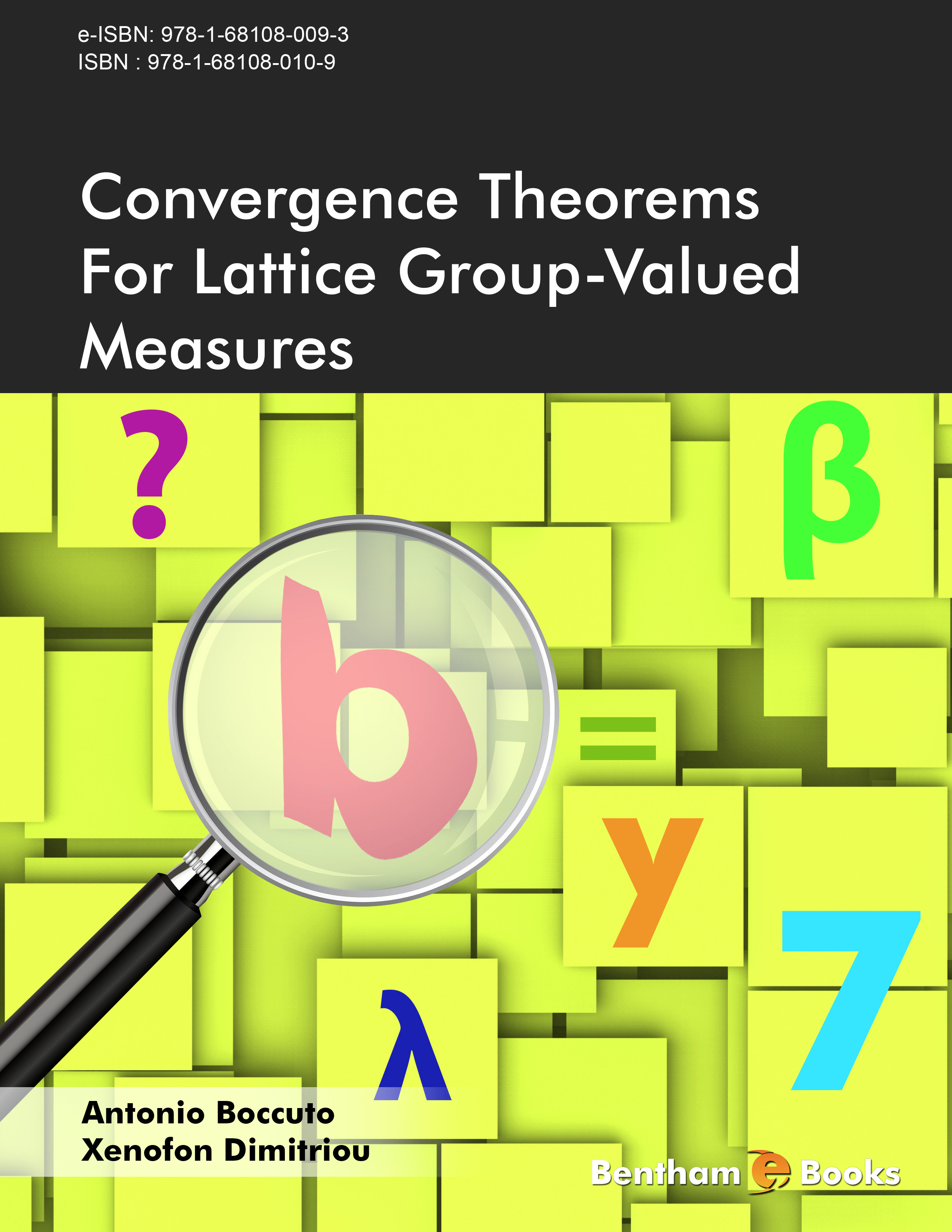 Convergence Theorems for Lattice Group-valued Measures explains limit and boundedness theorems for measures taking values in abstract structures. The book begins with a historical survey about these topics since the beginning of the last century, moving on to basic notions and preliminaries on filters/ideals, lattice groups, measures and tools which are featured in the rest of this text. Readers will also find a survey on recent classical results about limit, boundedness and extension theorems for lattice group-valued measures followed by information about recent developments on these kinds of theorems and several results in the setting of filter/ideal convergence. In addition, each chapter has a general description of the topics and an appendix on random variables, concepts and lattices is also provided. Thus readers will benefit from this book through an easy-to-read historical survey about all the problems on convergence and boundedness theorems, and the techniques and tools which are used to prove the main results. The book serves as a primer for undergraduate, postgraduate and Ph. D. students on mathematical lattice and topological groups and filters, and a treatise for expert researchers who aim to extend their knowledge base.

One of the topics of wide interest for several mathematicians, which has been successfully widely studied for more than a century, are the convergence and boundedness theorems for measures, in connection with properties of integrals, double sequences, matrix theorems and interchange of limits. Some related results in this area are the Banach-Steinhaus theorem in the operator setting and integration theory together with its fundamental properties. These topics have several applications in different branches of Mathematics, like for example topology, function spaces and approximation theory.

At the beginning, the case of σ-additive real-valued measures and integrals was treated, together with matrix theorems. These topics have been developed in the literature along several directions. Firstly, by considering not only countably additive, but also finitely additive measures and even set functions which are not necessarily finitely additive. Secondly, dealing with measures with values in abstract structures, like for instance Banach, uniform and locally convex spaces, topological and lattice groups, and so on. Thirdly, investigating measures defined on algebras satisfying suitable properties but which are not necessarily σ-algebras, or more abstract structures like for example MV-algebras, orthomodular posets, D-posets, minimal clans, which have several applications, for instance to quantum mechanics and multivalued logics.

To prove the main results about these topics, there are two types of techniques: the sliding hump or diagonal argument, which studies properties of the diagonal of an infinite matrix whose rows and columns are convergent, and the Baire category theorem. The sliding hump was known just at the beginning of the last century and was used for the proofs of the first fundamental results about limit theorems. The technique which uses the Baire category theorem is based on certain properties of Fréchet-Nikodým topologies. But this method, in general, is not adaptable in the finitely additive case. So, in most cases, it has been preferable to consider again the sliding hump method, which has been deeply studied in proving limit and boundedness theorems and also in matrix diagonal lemmas, which are very useful for these subjects. Furthermore, two procedures to relate the finitely additive case to the countably additive case have been investigated: the first deals with Stone-type σ-additive extensions of the original measures, and the second uses Drewnowski-type σ-additive restrictions of finitely additive measures on suitable σ-algebras.

The novelty of the research of the authors, which is exposed in Chapter 4, is to study limit theorems in the setting of filter convergence, which is an extension of convergence generated by matrix summability methods and includes as a particular case the statistical convergence, which is related with the filter of all subsets of the natural numbers having asymptotic density one. Note that, in general, it is impossible to expect analogous results corresponding to the classical case, even for σ-additive real-valued measures, because in general filter convergence is not inherited by subsequences. However it has been possible to prove several versions of limit, matrix and boundedness theorems as well as some results about different modes of continuity and convergence for measures, filter exhaustiveness (extending to the filter setting the concept of equicontinuity), continuity properties of the limit measure, weak filter/ideal compactness, and so on. The first chapter contains a historical survey of these topics since the beginning of last century. In Chapter 2 we deal with the basic concepts and tools used, like for instance filters/ideals, lattice group-valued measures, filter/ideal convergence in ( l )-groups, and present some fundamental tool, like for example the Maeda-Ogasawara-Vulikh representation theorem and the Stone Isomorphism technique. Chapter 3 contains several versions of limit and boundedness theorems for lattice group-valued measures and some applications to integrals. In the appendix we present an abstract approach on probability theory and random variables in connection with Boolean algebras, metric spaces, σ-additive extensions of finitely additive functions, various kinds of convergence in the lattice setting and tools which can have further developments, and we present some developments of the abstract notion of concept and some applications to Bioassays and related topics investigated by X. Dimitriou and C. P. Kitsos.

The eBook can be used both as a primer on limit theorems and filters/ideals and related topics, for postgraduate and Ph. D. students who want to explore these subjects and their beautifulness, and as a text for advanced researchers, since it exposes some new directions and results, shows some possibilities of further developments and ideas and includes also some open problems in the area.

This eBook includes several topics and developments of the research, started with the Ph. D. thesis of Dr. Xenofon Dimitriou, which was brilliantly discussed on 22th December 2011 under the supervision of Proffs. Nikolaos Papanastassiou and Antonio Boccuto at the National and Kapodistrian University of Athens.

We want to thank Prof. Christos P. Kitsos for writing the foreword and Prof. Władysław Wilczyński for having translated from the Russian the papers by Doubrovsky, which the authors consulted for the preparation of Chapter 1. We thank also the Bentham Science Publishers, in particular Manager Hira Aftab and all her team, for their support and efforts. We also thank the referees for their remarks and suggestons, which improved the exposition of the eBook.