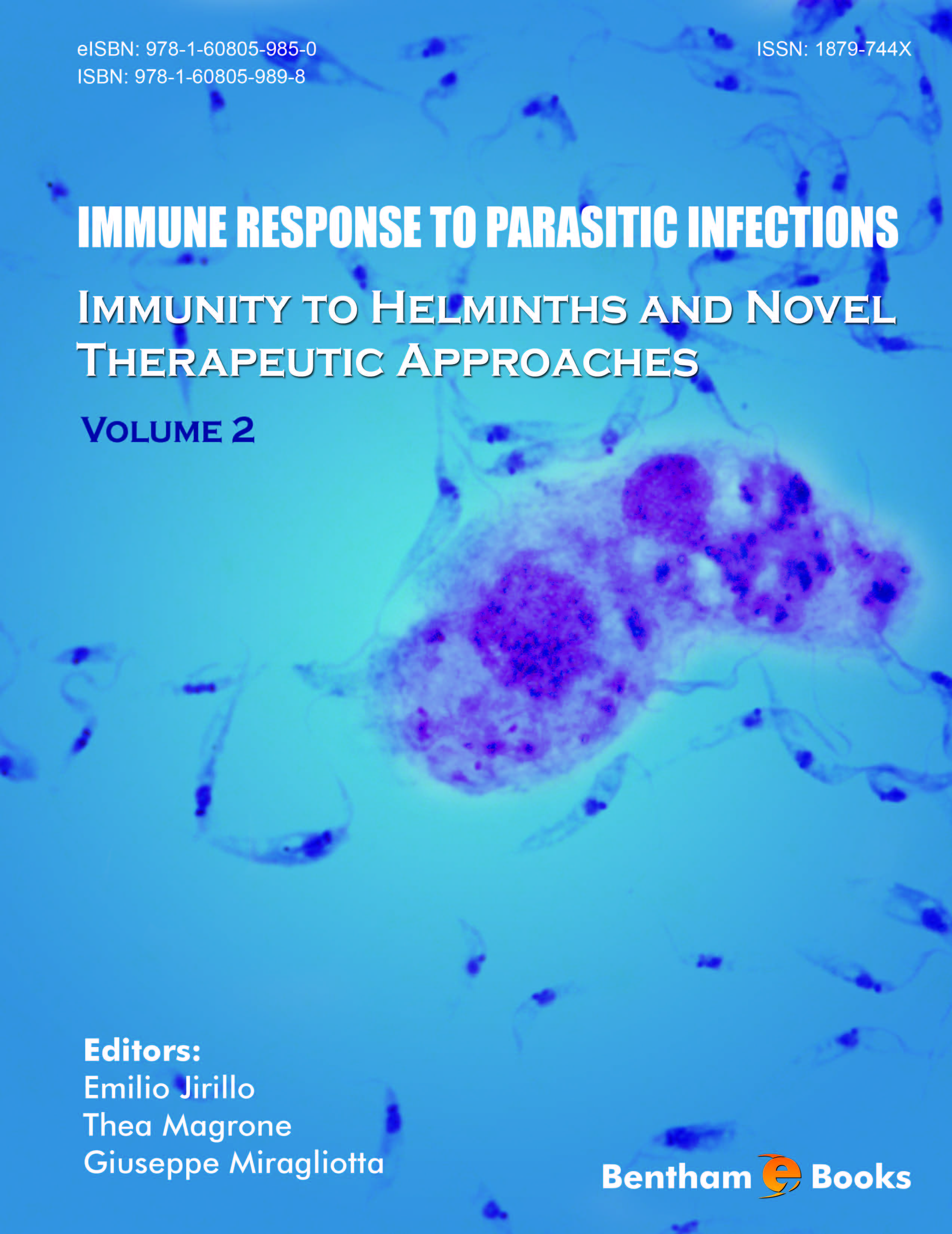 This volume covers research on the interaction of major helminth parasites with the immune system. The main focus of the e-book is the ability of helminths to subvert host immune responses, on the one hand. On the other hand, the immunological armamentarium of the host against invading parasites is described also in the light of new findings on innate and adaptive immunity. These include the discovery of a new category of lymphocytes, innate lymphoid cells, and the role of T helper cels such as Th1, Th2 and Th3 cells, T regulatory (Treg) and Th17 cells in helminth diseases and inflammation. The balance between these two T cell subsets during the various stages of helminth diseases is also discussed. The book concludes with a review of new therapeutic approaches to combat helminth parasites (biotherapy, vaccines and natural products).

This eBook, edited by Jirillo E, Magrone T and Miragliotta G, is the second volume of a series on immune response to parasitic infections. The book consisting of 10 chapters provides an overview of the recent advances on immunity to helminthic parasites, which are among the most prevalent infectious agents in the world. The widespread prevalence of helminths worldwide is due to their ability to manipulate host immunity by secreting molecules with immunomodulatory activity. The ability of helminths to escape host immune response leads to establishment of long term chronic infections both in human and animal hosts. The interactions between host and helminths are more complex than previously thought. As discussed in Chapter 1 by Nava-Castro and Morales-Montor, helminthic parasites not only evade immune response, but are also able to activate a complex neuroendocrine network, that produces strong behavioural changes in the infected host favouring the establishment, growth and reproduction of parasites. In Chapter 2 (by Alba-Hurtado et al.) and Chapter 3 (by O’Neill and Donnelly) the innate and adaptive immune responses towards Toxocara canis and Fasciola hepatica, two important zoonotic helminths in both humans and animals, are discussed. F. hepatica is an excellent model to elucidate mechanisms involved in Th1-immune suppression and the induction of Th2/Treg immune responses, while the importance for Th1 and Th2 immune responses is well highlighted in all models of Toxocara parasitic disease. Chapter 4 (by Profumo et al.) illustrates the current findings about the complex host-parasite interaction during hydatidosis, a helminth disease caused by Echinococcus granulosus with a worldwide prevalence of approximately 3 million cases. In particular, great emphasis has been given to a number of molecules of E. granulosus that are able to modulate the host immune response and to favour its survival. The analysis of parasite-mediated immune modulation during the development of human cystic echinococcosis is crucial to improve research on vaccines and control of this infection. In Chapter 5 Pennington and Hsieh provide an excellent coverage on the immunobiologic events that occur during S. haematobium infection from human and rodent studies. The knowledge of the host immune response to the different species of Trichinella both in humans and rodents is reviewed in Chapter 6 by Bruschi and Gómez-Morales. The authors described the different effector mechanisms involved in the control and elimination of this intracellular nematode. Particular attention has been paid not only to mechanisms of evasion and immunomodulation, but also to the evaluation of the humoral immune response with the aim to improve the development of diagnostic tests for trichinellosis.

Anisakis simplex is the main causative agent of Anisakiasis, an underestimated infestation that is acquired through the consumption of raw parasitized fish. Chapter 7 by Ventura et al. focuses on the immunopathogenesis of the disease, taking into account the role of gastrointestinal inflammatory response that involves the massive recruitment of eosinophils at the site of infection. The concept of manipulation of host immunity by helminths is widely discussed in Chapter 8 by Pineda and Harnett. The identification of helminth-derived molecules involved in immunoregulation is of great importance to understand immunopathogenesis of helminth infections. Paradoxically, these secreted products could represent the basis for the development of innovative strategies for the treatment of allergic and autoimmune diseases. The same topic is further discussed in Chapter 9 by Figueiredo et al. which reviewed epidemiological and experimental evidences whereby helminth infections are able to protect their hosts from immune mediated diseases. Studies that assess the development of parasites-based immunotherapy to treat immune-mediated disorders should be strongly encouraged. Finally, the editors of this e-book (Chapter 10) provide new insights in the interaction between helminths and human microbiota. In particular, they suggest that therapeutic correction of altered gut microbial immunity may interfere with helminth development. The authors reported their recent findings on the effect of polyphenols to downregulate the immunopathology in helminth infection. On these grounds, daily intake of polyphenols may be beneficial in chronic helminth infections by directly inducing parasite death and shaping the gut microbiota.

In conclusions, the present e-book provides key advances in our knowledge of the immunlogic mechanisms involved in the helminth infections. Importantly, this eBook integrates both basic and clinical immunology with relevant implications for the development of protective and therapeutic strategies for helminthiasis.