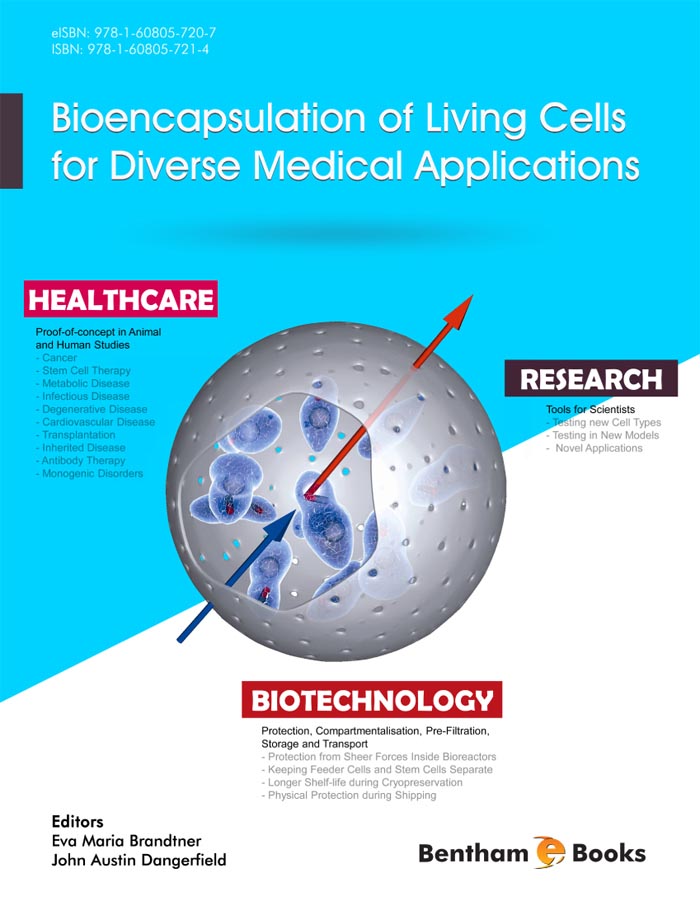 Bioencapsulation (or microencapsulation) of cells and their implantation into a body of immunoprotected cells allows researchers to revive a missing or defective function in the cells. Microencapsulated cells have reached the clinic where they have been shown to be safe and efficacious in numerous clinical trials. Cell types that have been encapsulated for therapeutic purposes include hybridomas, islet cells, "platform" cell lines e.g. HEK293 and CHO cells as well as an increasing focus on the encapsulation of stem cells. This e-book explains the different methods used for achieving cell bioencapsulation based on different polymers e.g. alginate, cellulose sulphate and agarose. Other chapters in this book subsequently describe the use of cell encapsulation in cancer therapy to improve on existing chemotherapies by reducing doses and thus side effects while increasing efficacy for long term in vivo production of (i) tumoricidal or virus neutralising antibodies, (ii) insulin to achieve a self regulating treatment for diabetes and (iii) neuron nurturing factors to treat CNS diseases such as epilepsy, disorders like Parkinson's disease, Alzheimer, Amyotrophic lateral sclerosis, Huntington's disease and pathologies caused by trauma and/or ischemic processes. The book also includes a chapter reviewing the genetic engineering of cells to allow controlled production of biotherapeutics from encapsulated cells.

This is a unique and timely book which brings together contributions from some of the leading researchers in the field of cell encapsulation. Interested readers are provided an overview of the exciting developments and clinical experiences of researchers with cell bioencapsulation.

The encapsulation of cells into a biocompatible shell has three main purposes: 1) Protection of the cells from the immunity of the living system where they are applied 2) Physical localisation of the cells, and hence the biomolecule they produce, at the therapeutic target site (in contrast to single cells which would in most cases migrate or move away at some point) and 3) The opportunity to remove the cells after treatment is completed if required.

The concept of encapsulation to allow implantation of foreign cells into a patient is not new, but is something that has still not been successfully developed to the point at which a licensed medical product exists on the market. In times when allogeneic cell therapy is considered to be potentially big business and encapsulation allows an easy way to make a “one-for-all” product, this is surprising. This is most likely due to the complex challenges of generating a GMP (Good Manufacturing Practice) grade of off-the-shelf living cell product in addition to the challenges of combining this with an encapsulation device. Several research laboratories and small companies are however currently working to achieve this with some varying levels of success. An Australian based company named Living Cell Technologies has achieved small scale GMP production and is undertaking clinical trials for the treatment of diabetes and has encouraging pre-clinical work for a number of other neurodegenerative applications. The US based company Novocell also has a focus on stem cell encapsulation for diabetes treatment and a clinical trial has been undertaken. The now Singapore based company, SG Austria (Austrianova Singapore), could show safety and efficacy of encapsulated cells producing a prodrug converting enzyme in a clinical phase I/II trial for pancreatic cancer (Lohr et al., 2001). Subsequently, orphan drug status was granted and a large-scale GMP facility with production license was established, showing for the first time that it could be done (Salmons et al., 2007). More recently in 2012, they presented similar positive results for a second phase II trial in the same indication.

Proof of principle has been shown for several different encapsulation techniques and materials (and combinations thereof). Predominantly, biocompatible and non-toxic polymers such as sodium cellulose sulphate, alginate, agarose or polyethylene glycol are used. The speed and sterility of the process and the quality and purity of the encapsulation agents are critical for success and reproducibility of the procedure and further viability of the cells, i.e., that they continue to produce and/or secrete their therapeutically relevant biomolecules and remain bio-inert when implanted into animals or patients.

A huge variety of cells with proven or potential therapeutic activity exist in research laboratories and companies alike and because many of these cells cannot be brought into the patient directly such groups are networking hard with encapsulation specialists. A prominent example is the use of pig islet cells, or other forms of insulin producing cells, for the treatment of diabetes. In immune deficient animal models such cells can react to blood sugar levels and produce insulin on demand, and encapsulation offers the perfect way to bring such cells into a patient.

This eBook describes the details and pros and cons of the currently most used and most promising types of encapsulation methods and materials as well as the currently most focused-on cells, biomolecules and disease areas. Authored by leading scientists and company executives, it gives relevant examples, reviews published data and describes the projects closest to commercialisation. Several chapters also include easy-to-follow lab protocols making it a useful laboratory handbook for researchers and students alike.