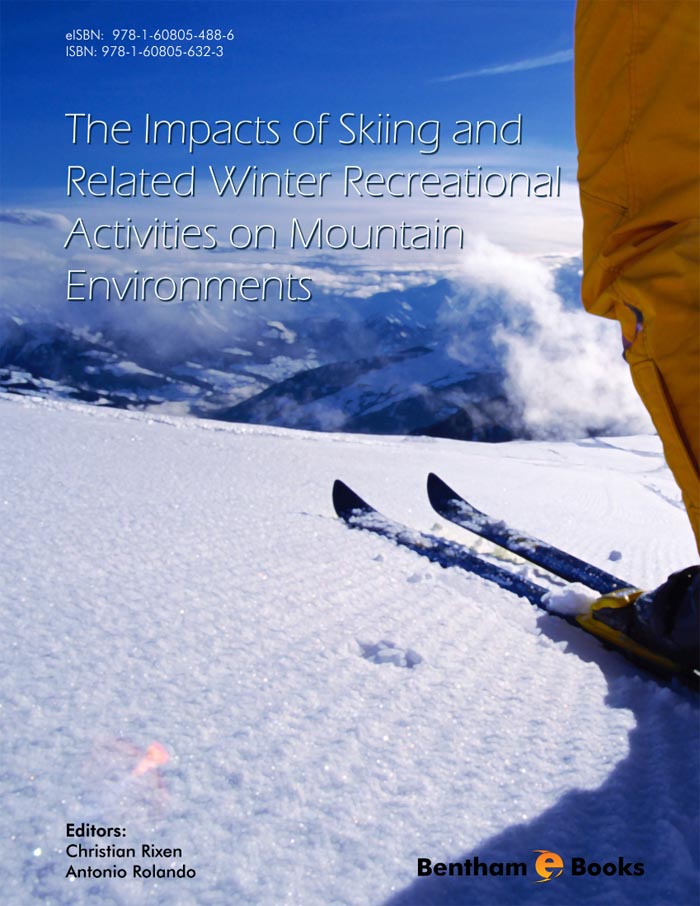 This e-book reviews environmental impacts of ski tourism in mountain environments. Specifically, the book addresses skiing impacts on soils, vegetation, vertebrate and invertebrate animals living in such habitats. Additional chapters also explain the methods for the restoration of disturbed sites at high altitude and snow cover in a changing climate.

Not only do mountain regions cover a significant proportion of the land area of many countries of the world, they are also home to 10% of the world’s population, and furthermore provide half of humanity with essential goods and services. Mountain habitats cover broad altitude ranges and contain large geological, topographical and climatic diversity. External influences such as atmospheric changes and human land use interact with these gradients, which in turn affect biodiversity, ecosystem processes and landscape functions. However, mountain ecosystems recover slowly if disturbed. Hence, they must be classified as particularly sensitive to change. Due to the close interactions between highlands and forelands, the impact of transformations on mountain environments is not restricted to the mountain regions themselves but may have far-reaching downstream effects.

Mountain Agenda estimates that about 15 to 20% of the world’s tourist industry is located in mountain areas, which generates about 70 to 90 billion US$ per year. Growth rates in tourism are generally estimated to be at around 5% per year; however, growth in mountain tourism is quite inconsistent. The variable topography and scenic beauty of mountains, the high diversity of natural and near-natural habitats as well as the diversity of cultural landscapes, and the clean and cold air appeal to the “wellness and health” and eco-tourist. Moreover, mountain regions provide various opportunities for sports and leisure activities which attract tourists in summer as well as in winter. However, mountain tourism is increasingly characterised by extensive structural changes. Conventional divisions are starting to disintegrate due to today’s value pluralism. For example, the typical (alpine) summer or winter tourist does not exist anymore, and the boundaries to seaside and city tourists are fluid. The trend towards so-called “stand-by-tourists”, who are taking their decisions at increasingly shorter notice, is continuing. Although mountain and especially skiing tourism has been increasing in many parts of the world and is perceived as a fast way to boost economy and gain wealth in mountain regions, the influence of demographic change on winter sports in particular has been evident for quite some time in Europe. It became apparent that the older target group is expecting a specific experience, with nature playing quite an important role, but culture and health as well as service are important aspects too. Even today, skiing federations are complaining about a decreasing number of young athletes. One reason for this decrease may be the increasing distances which have to be covered in order to learn and practise winter sports. Tourism is also extensively affected by a change of demands which stresses the diversity of experiences over the duration of the holiday.

Besides these structural changes, the winter tourism industry has to address the challenge of climate change. Mountains are among the regions most sensitive to climate change, and mountain tourism will be greatly affected by it. Today’s adaptation strategies are usually technical: enhancing the conditions of artificial snow production, levelling the surface of ski slopes in order to reduce the amount of artificial snow needed, and expanding and developing new skiing areas at higher altitudes and on glaciers. The intrinsic problem of these strategies is the degradation of natural ecosystems, which is increasing with the area affected by ski-lifts and ski-pistes, artificial snow, and ground levelling. It is therefore all the more important to know and understand the impact of ski-tourism on mountain ecosystems.

Even though the first investigations on the ecological effects of ski-pistes were conducted in the 1970s, an extensive work collecting the state-of-the-art knowledge on the topic has thus far been lacking. This eBook is filling that knowledge gap by providing comprehensive information concerning the global impact of ski-tourism on mountain ecosystems, with a special emphasis on vegetation, soils, wildlife and restoration ecology. May it help to raise awareness of the vulnerability of mountain regions and promote the precautionary principle in their management! It is my hope that it will also encourage sustainable strategies of tourism development in mountain areas in our fast changing world.