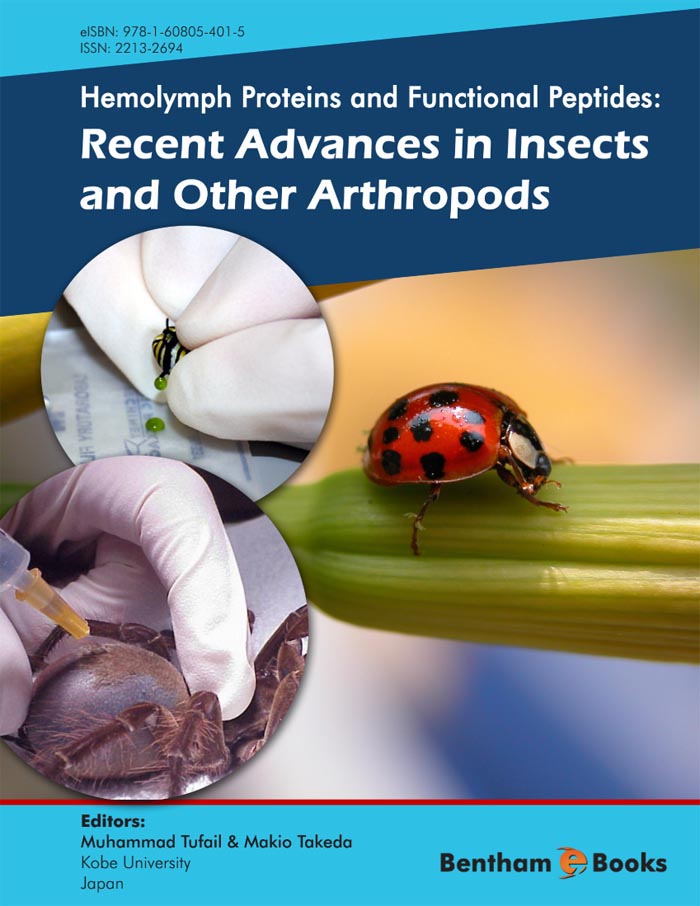 Recent Advances in Insects and Other Arthropods

This eBook on “Hemolymph Proteins and Functional Peptides: Recent Advances in Insects and Other Arthropods” represents an up-to-date compilation of the major functionalities of hemolymph proteins as there are lipid transport and energy mobilization realized by lipophorins, larval amino acid storage and yolk precursor functions in the adult as well as immune and stress responsive proteins. Evidently the hemolymph, a primary colonization substrate for invaders, supported by the inflow of antimicrobial peptides from both the fat body and the hemocytes, harbors complex but effective immune pathways. As a circulatory system, the impact of heartbeat changes on hemolymph functioning cannot be overestimated, however its assumed regulation by neuropeptides seems non-physiological. According to this primary transport role, the hemolymph assures a direct reciprocal interface between the midgut digestive system and all other organs, including the brain, which is mainly mediated by regulatory peptides, proteins and related compounds. The insulin-like censoring and signaling pathway, among others, communicates food and energy supplies to the insect assuring either initiation/continuation or arrest of major functionalities like reproduction. To complete this eminent list of functions dedicated to proteinaceous and peptidic hemolymph factors, final focus is directed towards the presence of the multifunctional ENF family type peptides helping the insects defence system/development in many aspects.

Being a generalist in insect physiology since 1977, I really enjoyed reading all these manuscripts in preview: they are really uploaded with most recent data in their fields of expertise. Indeed in each chapter the authors succeeded to expand the comprehensive knowledge of previous or even recent reviews of their research fields by critically surveying over 1100 papers. Whenever relevant, the authors shed some light to new ongoing or planned research and by doing so the readers’ curiosity to learn about results in the pipeline is awakened.

Evidently, as suggested by their title, some chapters are seemingly biased by the overwhelming data obtained in insect model organisms or related arthropod lab rats, however comparative interspecies approach, sometimes highlighting species-specific peculiarities, helps the in-depth understanding and eco-physiological significance of the fluctuations linked to hemolymph components and whenever necessary restricts the over-extrapolation of data that are only obtained in a single model organism.

The combined up-to-date knowledge about hemolymph factors, their origin and targets not only have fundamental value or feed healthy curiosity. Indeed the parallels between processes here described for insects and related arthropods and those known in vertebrates in general and mammals in particular underline the importance of continued reciprocal complimentary research. Evidently, the here discussed data and extensive interpretations here will be of direct benefit for those involved in integrated pest management.

The research of the last decennium was boosted by “omics” research and the genome-wide screenings shed light on the overall complexity of regulatory pathways. The revitalized functional protein/peptide research, originally restricted to trans-gene over-expression or knockout models, since the introduction of RNAi can be extended to most species. This single technological realization already accounts for more than thousands of recent “RNAi-insect” reference hits. This simple example underlines the value of regular up-to-date integrating reviews. We can only be respectful to the editors Dr. M. Tufail and Dr. M. Takeda for bringing together all these exciting data with the help of the respective authors.