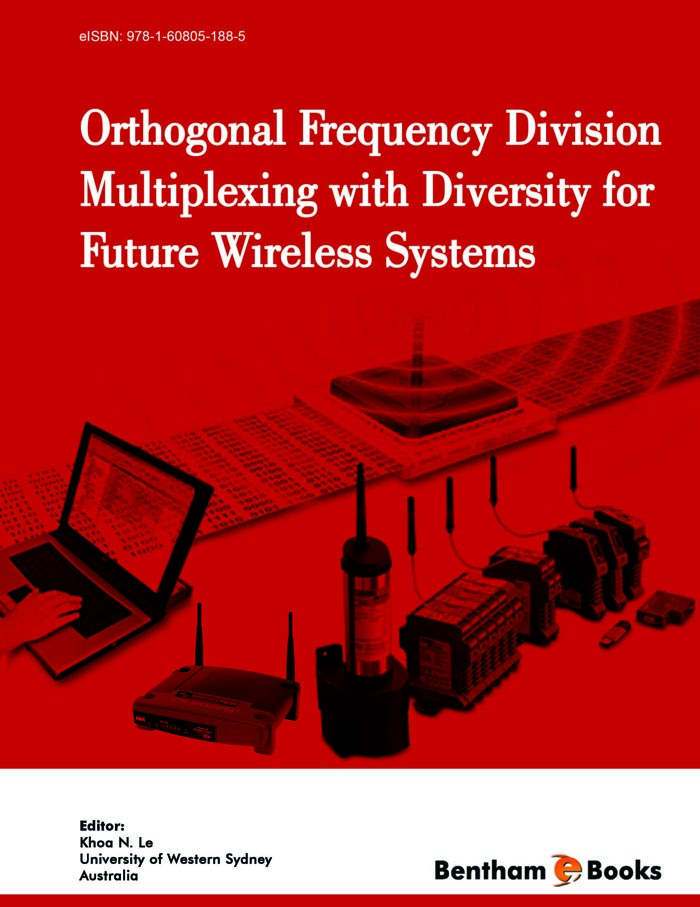 Orthogonal Frequency Division Multiplexing (OFDM) and Orthogonal Frequency Division Multiple Access (OFDMA) have attracted in recent years the attention of the worldwide wireless systems research community. OFDM and OFDMA have been considered as the future technologies for the IEEE 802.16 standard which show their effectiveness for communications systems.

OFDM is a frequency-division multiplexing (FDM) scheme employed as a digital multi-carrier modulation technique. A high number of closely-spaced orthogonal subcarriers are employed to hold data. The latter is separated into a number of parallel data streams; one per sub-carrier. Every subcarrier is modulated with a traditional modulation scheme at a small symbol rate, preserving the overall data rate similar to traditional single-carrier modulation schemes.

OFDMA is used in various applications including: the mobility mode of the IEEE 802.16, usually called WiMAX, the IEEE 802.20 mobile Wireless MAN standard, often called MBWA, and the Qualcomm/3GPP2 Ultra Mobile Broadband (UMB) project, among others. Furthermore, it is a candidate access method for the Wireless Regional Area Networks (WRAN).

This book studies OFDM and OFDMA employing receiver diversity systems from the fundamental perspective to application and advanced perspective. The main difference of this book from other published books is that it focuses on OFDM fundamental problems and proposes possible solutions using receiver diversity techniques. The Editor has carefully grouped the chapters so that their topics fall into the same area, starting with OFDM fundamentals, advanced OFDM, cellular OFDM and OFDMA.

The contributing authors are recognised as active worldwide researchers in the field of OFDM and OFDMA. I have no doubt that this book would be a useful addition to the current literature on OFDM and OFDMA which are fast growing fields with a lot of future applications. I would strongly recommend this book for researchers in the field of OFDM/OFDMA, wireless networking/communications, and as a reference for courses in OFDMA/OFDM and Wireless Communications/Networks.

Since the conception of the Pan-European digital mobile radio system in the mid- 1980—which later was renamed as the Global System of Mobile (GSM) communications— a transmission rate increase of three orders of magnitude was achieved by the research community. This was facilitated by the impressive advances in signal processing designed for wireless communications, in information theory and in nano-electronics. The required investments in research and development were fueled by the increasing consumer demand for high-quality multimedia communications in the emerging wireless Internet era. However, the prompt delivery of large amounts of compressed multimedia information at high transmission rates and at an infinitesimally low error probability constitutes a challenge, because the deleterious wireless propagation effects impose grave degradations on the received signal. These hostile channel effects may only be mitigated by a combination of counter-measures, such as reduced cell-sizes—as exemplified by the recent introduction of femto-cells—and sophisticated signal processing techniques.

For example, whilst the GSM system’s data rate was a mere 9.6 kbit/s, the recent High Speed Packet Access (HSPA) mode of the Third-Generation (3G) system is capable of reaching a rate of 13.7 Mbit/s. Naturally, at a given multipath-induced maximum dispersion the commensurately reduced symbol durations of state-of-the-art systems imply that either order of magnitude longer channel equalizers have to be operated at orders of magnitude higher clock-rates or parallel processing techniques have to be invoked.

This parallel processing philosophy may be traced back to a 1957 contribution by Doelz, Heald and Martin on Binary Data Transmission Techniques for Linear Systems, which was published in the Proceedings of the IRE and heralded the 50-year research of OFDM. As widely exploited at the time of writing, high-speed data processing may be carried out by numerous parallel processes, leading to the appealing technique of using numerous low-rate subcarriers for conveying and processing reduced-rate parallel streams.

The resultant extended-duration parallel symbol of each OFDM carrier may then be deemed to be more or less unaffected by dispersion. Even if these extended-duration parallel OFDM symbols happen to be facing frequency-selective fading, the associated frequency-domain channel transfer function may be readily estimated and lowcomplexity single-tap multiplication-based frequency-domain equalization may be invoked, instead of high-complexity convolution-style time-domain equalization or Viterbiequalization- style maximum likelihood sequence estimation.

In the interest of further mitigating the effects of fading, this volume aims for combining the benefits of OFDM with diversity techniques employed both at the transmitter and at the receiver. Another benefit of OFDM is that it has an innate ability to support multiple users by assigning the subcarriers or groups of subcarriers to them on a flexible demand basis, leading to the appealing concept of OFDMA. The book also offers a chapter on the cellular planning of OFDM/OFDMA networks.

Since OFDM has found favour right across the entire portfolio of recent wireless communications standards, such as the IEEE 802.11a/g WLAN modem family, WiMax, DAB and DVB, as well as the Third-Generation Partnership Project’s Long-Term Evolution (3GPP-LTE) initiative, the book is both timely and topical.

Multiple-input multiple-output (MIMO) smart-antenna techniques are capable of further increasing the effective throughput of OFDM systems and/or improving their robustness against channel-induced fading effects. A tangible justification for the employment of MIMOs is that their capacity increases linearly with the smaller of the number of transmit and receive antennas. If for the sake of argument we assume having the same number of transmit and receive antennas and that we linearly increase the transmit power by gradually assigning the extra power to extra transmit antennas, then we could surmise that their throughput increases by and large linearly with the power. This is a far more power-efficient regime than the family of single-input single-output (SISO) systems, which have to obey the logarithmically increasing capacity rule of Shannon. We note however that when the bandwidth tends to infinity, the SISO capacity also increases linearly with the transmit power.

The family of MIMOs subsumes diverse techniques, but four dominant subclasses may be worth mentioning. The class of transmit-diversity based space time block coding (STBC) and space time trellis coding (STTC) schemes are designed for attaining the maximum diversity gain and hence mitigate the effects of fading, as detailed in the book. By contrast, beamforming aided MIMO-OFDM is capable of mitigating the multi-user interference imposed by other wireless users that roam in the vicinity of a desired user by creating angularly selective beams. These beamforming techniques are investigated in the context of the WIMAX system in the book. As a further advance in the field, the benefits of having access to the CIR about to be encountered during the next transmission burst are also examined by the authors under the realistic assumption of having a limited feedback channel.

The remaining MIMO categories aim for achieving a multiplexing gain and hence they are not explicitly addressed in this volume, which is dedicated to diversity assisted MIMO-OFDM. Nonetheless, briefly, in a typical up-link spatial division multiple access (SDMA) based MIMO-OFDM arrangement, each remote mobile user has a single transmitter antenna that communicates with a base station array of receiver antennas. All users can share the same bandwidth, and each can be separately identified because they are at different geographical locations and the spatial signature of each user—which is constituted by their sufficiently accurately estimated channel impulse responses—is unique. Finally, when the mobile stations are also equipped with multiple antennas, all the MIMO capacity may be allocated to a single user in the interest of increasing their throughput instead of supporting multiple users. The resultant arrangements are typically referred to as Spatial Division Multiplexing (SDM) schemes.

The price to pay for the above-mentioned MIMO-aided throughput and/or integrity benefits is that accurate estimates of each of the individual MIMO links complex-valued channel transfer function (CHTF) or CIR have to be derived at the receiver. Hence channel estimation 6 × 6 = 36 MIMO links, since 36 CHTF/CIR estimates have to be generated. Spatial-domain, time-domain and frequency-domain pilot symbol assisted channel estimation techniques are discussed in the book, touching upon the specific pilot placement and pilot power allocation issues. It is worth noting that the channel estimation related pilot overhead may become excessive, when employing a high number of antennas or catering for high Doppler frequencies. Hence new research should aim for conceiving non-coherently detected low-complexity solutions.

In the presence of time-selective and frequency-selective fading adaptive modulation and coding (AMC) techniques may be invoked as a further fading counter-measure. These techniques are also amalgamated with adaptive power allocation and diversity combining in the book, although it is worth noting that the employment one of these counter-measures is typically sufficient for mitigating the fading, so that the channel decoder effectively removes the residual errors. Naturally, these techniques also necessitate accurate channel quality estimation and feedback. AMC techniques matured over the past decade and they have found their way into numerous recent wireless standards, including the above-mentioned HSPA and LTE standards. However, their non-coherently detected low-complexity versions require further research.

Finally, the synchronization problems of MIMO-aided systems are also more grave, than those of their SISO counterparts, because the total transmit power has to be distributed across several antennas for the sake of fair comparisons. This power-sharing potentially results in a reduced-power, noise-contaminated per-antenna received signal during the most critical initial synchronization phase. Naturally, the required synchronization overhead is also dependent on the number of MIMO elements and on the Doppler frequency.

In conclusion, OFDM indeed has reached a state of maturity, but it also offers numerous further design challenges, many of which are addressed in the book with the motivation of further fueling research. Just to mention a few, blind and trained channel estimation as well as synchronization has further open problems, which may be solved with the aid of multi-stage iterative transceivers exchanging extrinsic information. When dispensing with channel estimation, AMC designed for low-complexity non-coherent transceivers deserve further attention. Similarly, non-coherent MIMO transceivers require further investigations. This becomes particularly important in the context of distributed MIMOs, which are constituted by a set of cooperating single-antenna-aided mobile stations. The main benefit of these cooperative solutions is that conventional co-located MIMO elements are often subjected to shadow fading, when all the MIMO channels will fade together. Hence the independent fading based diversity gain erodes. This shadowing-induced correlation may be readily circumvented with the aid of the geographically separated cooperating mobile stations, although again, at the cost of a factor two cooperation-related multiplexing loss.

An attractive design alternative is to avoid the employment of AMC—which requires channel quality estimation—with the aid of three-dimensional spreading across the time, frequency and spatial domain with the aid of three-dimensional (3D) MC-CDMA. Indeed, we might hypothesize that owing to its numerous benefits, 3D MC-CDMA might become the next-generation physical layer enabling technique—following the 2G TDMA, 3G CDMA and 4G OFDMA solutions!