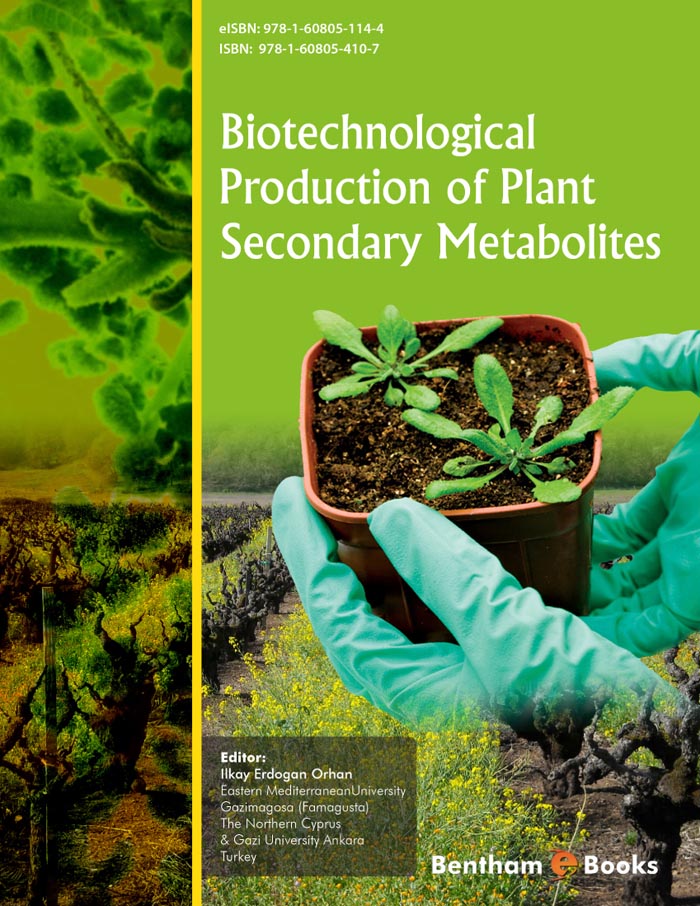 Modern techniques have been developed to overcome problems associated with the extraction of natural products from plants. These techniques include production of secondary metabolites by biotechnological methods such as plant tissue culture and microbial biotransformation of natural substances. Such methods have led to an increased yield of secondary metabolite amount, the discovery of new biochemical derivatives and agricultural development. For instance, use of these techniques in agricultural area have led to some beneficial traits such as formation of new varieties of known plant species, better crop quality, higher yield, better nutritive properties, more resistant species to insects and pests. Microbial biotransformation is beneficial in plant secondary metabolite production and derivatization (chemical modification of any compound made by a microorganism) and is chiefly applicable to several varieties of terpenes and steroids. This E-book demonstrates recent developments in this field. It will be of particular interest to the professionals in pharmaceutical and biotechnological industries, as well as natural product chemists, medicinal chemists, plant biochemists, and molecular biologists.

Modern life is complex and evolution went along way starting from very simple organic molecules to larger biomolecules and, in addition, they interact with other classes of molecules in the environment. It is the essence of scientific research to be in constant evolution. Plant cell science, plant genetics, and plant biotechnology of today bear only faint resemblance to what they used to be only twenty years ago. Plant cell reports keep pace with this evolution.

Plants have evolved an amazing array of metabolic pathways leading to molecules capable of responding promptly and effectively to stress situations imposed by biotic and abiotic factors, some of which supply the ever-growing needs of humankind for natural chemicals, such as pharmaceuticals, nutraceuticals, agrochemicals, food and chemical additives, biofuels, and biomass. Robotics and combinatorial techniques allow chemists to synthesize single libraries that contain more compounds than ever before. Especially, medicinal chemists but also chemists active in the catalysis area have embraced this efficient new synthesis tool. Moreover, advances in molecular biology and genomics continue to improve our understanding of biological processes and to suggest new approaches to deal with inadequately or untreated diseases that afflict mankind. Despite of all the progress in both molecular biology/genomics and combinatorial chemistry methods, it is generally recognized that the number of pharmaceutically relevant hits is not directly proportional to the number of compounds screened. Both structural diversity and complexity in a collection of molecules are essential to address.

13 Chapters in this eBook on medicinal plant biotechnology covers recent developments in this field. It includes a comprehensive up-to-date survey on established medicinal plants and on molecules which gained importance in recent years. The chapters published in this eBook today address highly relevant issues in modern plant cell science and plant molecular biology.

In “biotechnological production of plant secondary metabolites”, expert researchers provide detailed practical information on some of the most important methods employed in the engineering of plant secondary metabolism pathways and in the acquisition of essential knowledge in performing this activity, including the significant advances and emerging strategies. The chapters include introductions to their respective topics, lists of the necessary materials and methods, findings along with discussions step-by-step.

Among secondary metabolites, the biosynthesis of phenolic compounds which have a potential use as an antioxidant and terpenes extensively used as flavors and fragrances in perfumery and medicines are described in detail. Recent advances in plant biotechnology have been explained by showing the potential of plant cell and tissue cultures for the large-scale production of valuable secondary metabolites. One of the most important secondary metabolite of the plants known as coumarins has been examined regarding to the biotechnological view.

Natural products with potential biomedical applications along with the production of bioactive compounds by using biotechnological methods have been described. The production of anthocyanins under in vitro conditions has been given in detail for researchers in plant biotechnology. From Scrophulariaceae family, Castilleja tenuiflora Benth. is one of the medicinal plants used in Mexican folk medicine in the treatment of cancer. Root and shoot cultures of this plant species have been investigated for the production of flavonoids and iridoids which are responsible for antioxidant and cytotoxic activities. Strategies to increase secondary metabolite production in plant cell cultures have been explained by giving examples for terpenoids.

Biotechnological investigations on Amaranthaceae plant species have been summarized. Biotechnology approaches have been shown for the utilization of Jojoba which is an economical important plant by giving propagation and cloning of genes coding for economically important traits. The production of cardenolides in Digitalis cultures was extensively described for the industrial production. Depending on their medicinal and economical importance, the production of secondary metabolites of the plant species from Boraginaceae family using biotechnological methods have been outlined. The impacts of cell and tissue culture technologies for the large-scale production of anticancer secondary metabolites have also been included.

Ilkay Erdogan Orhan has produced a magnificent effort covering relevant aspects of the medicinal plants in this eBook. Botanists, chemists, biochemists, pharmacognosists and molecular biologists having any interest potentially bioactive compounds will be satisfied in the eBook content.

Ilkay Erdogan Orhan is an experienced young pharmacognosist for many years now, she has been a scientist at the Department of Pharmacognosy, Faculty of Pharmacy Gazi University, involving with Turkish medicinal plant and marine organisms screening program. Her work includes the biological evaluation and phytochemical studies of secondary metabolites for drug discovery. She has published many scientific articles devoted to the discovery of new bioactive natural compounds and author/co-authored several chapters on the subject of medicinal plants. This wide experience has given her a broad perspective on drug discovery from biological sources and has benefited this eBook enormously. This eBook will be useful by academic and industrial scientists having any interest in the potential of plants as a source of bioactive lead compounds and to all who are interested in medicinal plants.