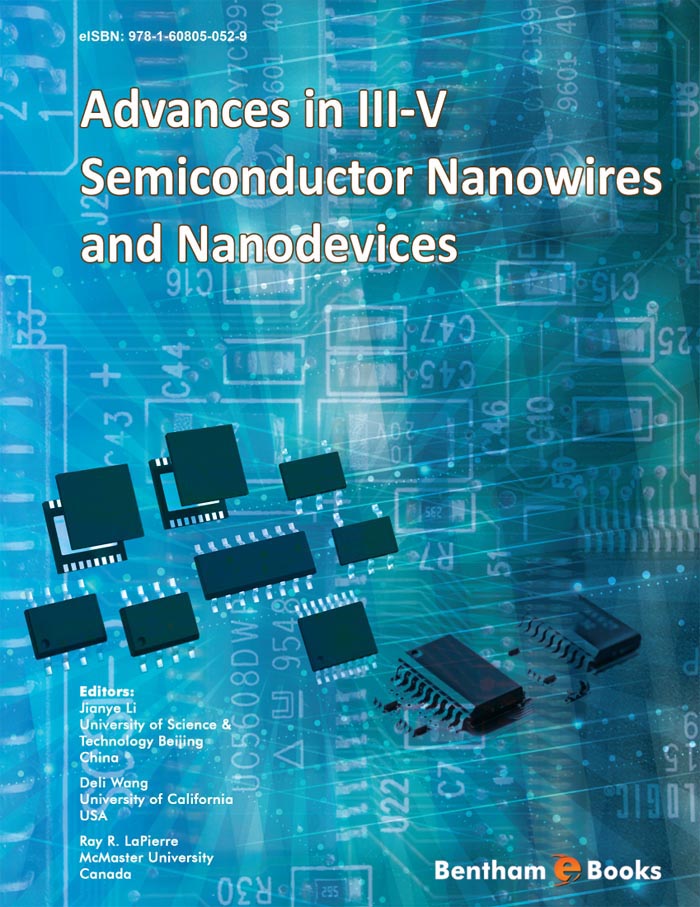 Semiconductor nanowires exhibit novel electronic and optical properties due to their unique one-dimensional structure and quantum confinement effects. In particular, III-V semiconductor nanowires have been of great scientific and technological interest for next generation optoelectronic devices including transistors, light emitting diodes, lasers, photodetectors, and solar cells. Advances in III-V Semiconductor Nanowires and Nanodevicesis an account of recent progress in the synthesis, characterization, physical properties, device fabrication, and applications of binary compound and ternary alloy III-V semiconductor nanowires. Each chapter is prepared by renowned experts in the field, describing the current state of knowledge and key areas of research. The book is written at the expert level, but also serves as a guide for researchers or graduate students aiming to enter semiconductor research.

III-V semiconductors constitute a wonderful materials system, allowing highly ideal materials with designable properties and, when combined into heterostructures, allow vastly varying structures and devices to be made. One of the limitations in the realization of advanced heterostructure systems using traditional planar epitaxy, is the requirement for a strict lattice-matching of adjacent layers, limiting what can be fabricated or making the realization of such heterostructure systems very demanding. This is when III-V nanowires came to the rescue: With the great progress in the late 1980’s and early 1990’s, in the laboratory of Dr. Hiruma at Hitachi Central Research Laboratories, the advent of III-V nanowires occurred based on metal-organic vapor phase epitaxy (MOVPE). Since then many different growth methods are being applied to nanowire growth, such as molecular beam epitaxy (MBE), chemical beam epitaxy (CBE), hydride vapor phase epitaxy (HVPE), each with advantages for special areas of applications. Already 20 years ago, Hiruma demonstrated high quality III-V nanowires, reported injection luminescence from nanowire pn-junctions and showed results for heterostructures between different materials in III-V nanowires.

It took until early 2000’s before the realization of highly ideal and atomically abrupt heterostructures in III-V nanowires was reported by my group, including the demonstration of the ability to form such ideal heterostructures also for highly lattice mis-matched structures, first demonstrated for the InAs/InP materials system. In this case one benefits from the way indium alloys with the gold particle which induces growth, while the group V atoms, arsenic and phosphorous, do not alloy with the gold but are made to incorporate at the interface between the metal particle/droplet and the top-end of the growing semiconductor nanowire. This progress led to the realization of a large number of 1D heterostructure devices, such as resonant tunneling diodes, single-electron transistors, single/few-electron memory devices, single quantum-dot emitters as well as control of artificial atom-like structures revealing very clear shell-structures in level filling experiments.

Although this demonstration system InAs/InP appears straightforward and very promising, reality is often more complicated than the simple picture, as it was later shown. Frances Ross et al. investigated how the interface surface energies have to be proper in order for ideal nanowire heterostructures to form, often with one transition A->B being different from B->A, in a way that the formation of Stranski-Krastanow islands depends on the surface energies involved. I would also like to bring to the attention the very detailed study performed by Linus Fröberg et al., where even this most ideal materials combination and transition between InAs and InP is indeed quite complicated due to the fact that the equilibrium incorporation of indium in the gold, at conditions for growth, depends strongly on the As-to-P fraction, leading to transients during the transitions in-between these two binary materials InAs and InP. Apart from adding a complication to an otherwise simple picture, these insights allow the design of the most proper procedures for forming ideal heterostructures in nanowires.

In recent years, the control of the structural properties has developed into a very active field of research, for the materials properties in general and for the impact the structural properties have on optical and electrical materials properties. It is well known today that while bulk and thin film growth of the (regular) III-V materials lead to the cubic zinc blende (ZB) crystal structure, nanowire growth often selects the formation of the hexagonal, wurtzite (WZ) crystal structure, in which the consecutive planes in the direction perpendicular the 111B substrate surface, go down like ABCABC in ZB and as ABABAB in WZ. This field of intensive research has been pioneered by my own group as well as that of Erik Bakkers at Philips Research and, I believe it is fair to say that the state-of-the-art of the field has just been published in Nano Letters in an effort pushed forward primarily by Kimberly Dick and Philippe Caroff, where the ability was demonstrated to form a fixed number of monolayers of ZB and WZ segments that were repeated and formed into a perfect superlattice.

Apart from the nuisance of poor control of nanowires with mixed layer-by-layer stacking sequences, into ZB and WZ segments, this also leads to very novel properties, such as the spatially indirect nature of the band-to-band recombination, as shown first by Bao et al. in 2008, and later confirmed in studies of recombination of electrons confined in ultra-short segments of ZB nanowires, with holes at the valence band edge of surrounding WZ, in papers by Spirkovska et al. (2009), and also by Akopian et al. (2010) and by Jancu et al. (2010). In a just published study by Dick et al. 2010, it was also shown how a single-electron transistor could be formed with the source, drain and coulomb island being made from ZB NW material, and with two tunnel barriers surrounding the QD being made from ultra-thin WZ segments.

Among the most interesting III-V nanowire materials being studied today are those exhibiting very strong spin-orbit interaction and magnetically active properties. Quantum dots in InAs nanowires have been investigated from the perspective of their suitability for fabrication of quantum information devices and InSb nanowires have shown extremely high g-factors and spin-orbit interaction. Obviously, the ultra-thin cross-section of such spintronic NW-devices may suggest that they can also lead to a very high level of miniaturization.

Obviously much of the driving force to the field comes from the opportunities for device realization in III-V nanowires. Of special interest here is the ability to form these III-V materials on silicon wafers and to use top-down patterning to control formation of single NWs or arrays of nanowires, as pioneered by my former student Thomas Mårtensson (Thesis Lund University, 2008). Among the applications that have already been demonstrated, at least on a laboratory level or R&D, are wrap-gate field-effect transistors and different versions of solar cell structures, both very recently reviewed in two IEEE review articles, Wernersson et al., “Semiconductor nanowires: extending a narrowing road”, and Borgström et al., “Nanowires with promise for photovoltaics”. In the near future, it seems that nanowires may indeed enter the competition for GaN-based light-emitting diodes (LEDs) with the special advantages that they offer in the ability to be grown on silicon wafers and the much larger level of freedom of combining different materials, like the not really lattice-matched GaInN materials system. Considering the great cost and “productization” advantages with growth on large area and inexpensive silicon wafers, this may become the critical step for a general acceptance of LEDs for general illumination applications and a transition to Solid State Lighting with huge energy savings.

In this book a number of specialized chapters are included jointly giving a comprehensive and updated description of the field of III-V nanowires today.