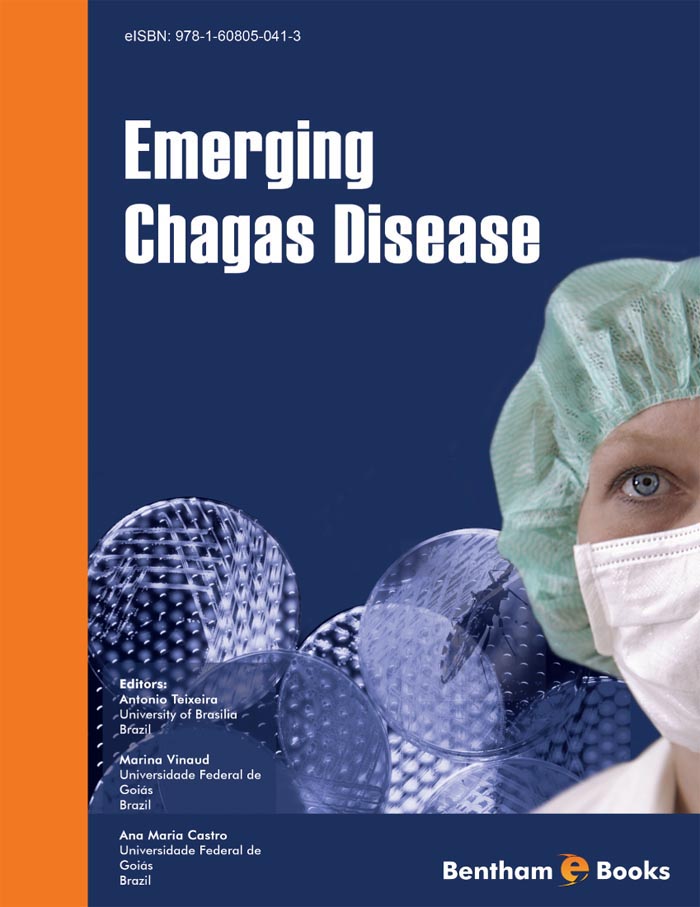 The book focuses on a global problem challenging the health systems. Trypanosoma cruzi infections are transmitted by cone-nosed triatomine bugs, by blood transfusion and congenitally from mothers to their offspring. The American Trypanosomiasis affects 20 million people; among them a significant parcel (< 1/3) will develop Chagas disease in the heart and digestive tract, where the immune system effector cells destroy target host cells. Genotype modifications resulting from transfer of minicircle sequence kDNA from the parasite into the host´s genome may explain the autoimmune pathogenesis of the disease. The book discusses various aspects of this disease and should be of interest to readers who wish to keep abreast of the developments in this field.

Chagas Disease is the most lethal endemic infectious disease in the Western Hemisphere, having a devastating effect on Latin American populations. The World Health Organization (WHO) has estimated that 18 million people are infected with Trypanosoma cruzi, the causal agent of Chagas disease. In endemic regions, field studies show mortality rates due to Chagas disease may be as high as 0.56%, with approximately 100.000 people dying from the disease per year. Usually Chagas patients die when they are between 30 and 45 years of age. According to the WHO/World Bank Chagas disease is a major burden inflicting an economic loss of six billion dollars annually. Chagas disease emerged among the settlers after the triatomine insect-transmitter adapted to human domiciles, and its endemicity expanded exponentially in the XIX century.

The major Amazon Basin tropical rain forest ecosystem, which was in the past considered Chagas disease-free, where new settlements, and ecosystem predation provide fertile conditions for the insect-vector to attack the human population, is now under epidemiologic surveillance for curtailing micro-epidemics detected in various counties. Currently, Chagas disease is no longer restricted to the poor people in remote rural areas of South and Central America. Autochthonous cases of Chagas disease have been reported, occasionally, in the United States, where the zoonotic T. cruzi infections are widely spread below Parallel 42ºN. Chagas disease is among other neglected infectious disease, such as Hanseniasis, Tuberculosis, Leishmaniasis, and Onchocerchiasiss.

Yearly, transfusions of contaminated blood contributes with thousands of new Chagas disease cases, now affecting a very broad social spectrum. The rural exodus has now made Chagas disease cosmopolitan. The T. cruzi-infected individuals migrating to North America, Europe, Asia, Africa, and Oceania pose a major threat, and this disease is presently in various continents. A further mode of transmission, congenitally from mother to offspring, contributes to its increase. Chagas disease thus represents a public global health problem, and its curtailment requires international solidarity. Nevertheless, the investments required for its control and prevention have not been sufficient to minimize current levels of T. cruzi transmission to humans. The disease is considered incurable. The drugs available to treat the infection are unsatisfactory, and developing a preventive vaccine is proving to be a challenge, awaiting the specific scientific advancement. Chagas Disease prevention and control require further studies on the ecological conditions and environmental changes related to the complex epidemiological chain that links forty species of invertebrate transmitters of the protozoan parasite to over 1250 mammal species dwelling in various ecosystems throughout the American Continents.

This book presents and discusses the scientific achievements made since Dr. Carlos Chagas (1909) demonstrated the T. cruzi in the blood of a feverish child. In the following decades the endemic Chagas disease in Argentina was reported by Salvador Mazza. The multidisciplinary approaches used in the studies of Chagas disease, involving environmental sciences, zoology, epidemiology, parasitology, pathology, internal medicine, biochemistry and molecular biology, and genetics give the readers a balanced view about the role the scientific development have played in the prevention and control of the T. cruzi infections, and in the paliative treatment of the Chagas disease severe clinic manifestations.

In this book the reader will find update information on Chagas disease with its increasing economic toll. In addition to the public usually interested in neglected diseases, human and veterinarian hospital blood-bank health workers, world travelers, and policy-makers, the emergence of Chagas disease worldwide has become of great interest of the general public, particularly in the last five years, after the alert was given by Health Authorities in various countries, concerning its acquisition by blood transfusion and congenitally.

The Editors wish to thank hundreds of laboratory workers, colleagues who have carried out the scientific research reported in the chapters of this book. Their contributions are indicated in the text, legends of figures as well as in the references used in the reviews. Particularly, we acknowledge the financial support of the Funding Agencies all over the World, which made possible the impressive scientific development important to protect the people’s health. Specifically, the Brazilian Funding Agencies, Conselho Nacional de Desenvolvimento Científico e Tecnológico (CNPq), and Financiadora de Estudos e Projetos (FINEP), Ministério de Ciência e Tecnologia (MCT), Brazil, The National Institutes of Health (NIH), USA, and public and private organizations that have funded the research of the Authors of this Book, are acknowledge.

I express my gratitude to all my colleagues who have contributed to this book.