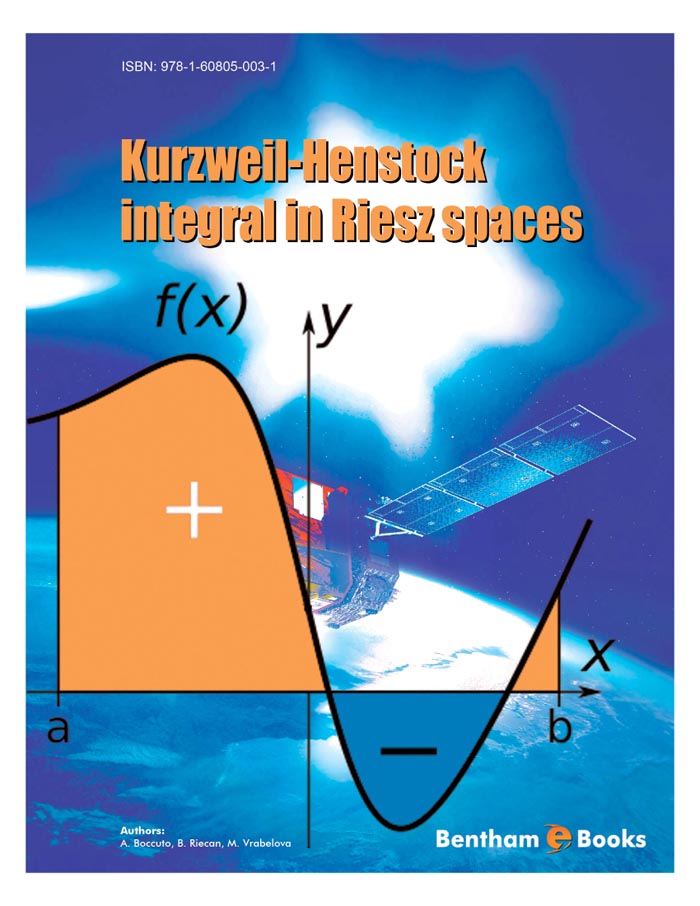 Kurzweil and Henstock’s idea to construct a new type of integral turned out to be both surprisingly successful and extremely useful, not only from the didactic but also from the scientific point of view. It has very promising applications, for example in differential equations and surface integrals. Riesz spaces, on the other hand, offer a very important tool in modern mathematics and have many practical applications, for example in economics. Recall that the eminent mathematician and Nobel Prize L. V. Kantorovich was the founder of the theory of Riesz spaces. This monograph is concerned with both the theory of the Kurzweil-Henstock integral and the basic facts on Riesz spaces

Another important application of this theory was discovered recently. In 2002 D. Kahneman received the Nobel Prize in Economics. While he was looking for a theoretical basis on his economical theory, he found an appropriate mathematical model: the so-called Šipoš integral, one of the topics we present in this monograph

It is well-known that integration theory with values in ordered spaces cannot be reduced to the analogous theory for locally convex spaces. This fact justifies the main goal of this book: to investigate and develop a measure and integration theory of the Kurzweil-Henstock type for functions with values in ordered spaces. The first chapter offers to the reader a self-contained treatment of the real-valued theory of the Kurzweil-Henstock integral. Namely, the extremely simple definition enables us to use a very concise and effective theory

The following chapter on Riesz spaces should also be accessible to a large class of readers. We not only mention slightly more general structures such as lattice ordered groups, but also some basic facts about MV-algebras: these are important for multivalued logic. The general theory of the Kurzweil-Henstock integral in Riesz spaces is presented in the third chapter. As discovered by J. D. M. Wright and D. Fremlin, there exists a sufficient and necessary condition for the possibility to extend Riesz space-valued Daniell integrals from the set of simple functions to the set of integrable functions, or a Riesz space-valued measure from an algebra to the generated σ-algebra. This condition, which is called weak σ-distributivity, holds in any probability MV-algebra.

Some more special topics are treated in chapters 7 - 10 and 13, namely improper integrals, SL-integrals, the Pettis and Choquet approach, and integration in metric semigroups. The Choquet integral (or its Šipoš symmetric variant) is of particular importance in non-additive measures.

In chapters 11 and 12 we are concerned with some applications to probability theory. In particular, it is important to observe that a probability theory on the so-called intuitionistic fuzzy sets can be constructed by considering them as embedded in an appropriate MV-algebra

As we mentioned before, the aim of this monograph is two-fold. First, it can be understood as an introductory textbook to the Kurzweil-Henstock integral as well as to some algebraic structures (Riesz spaces, l-groups, MV-algebras) which are important from the viewpoint of applications to integration and probability theory. Second, it offers some possibilities of further developments including important open problems in this attractive area, with a glimpse of the diversity of directions in which the current research is moving.

The first author wants to dedicate this book to the loving memory of his mother Teresa who passed away on August 2nd, 2004, while Antonio was in Slovakia for cooperating with Prof. Riecan. She always helped him, not only in overcoming many difficulties in his personal life, but she also encouraged him to leave Italy in order to broaden his fields of interest and to enrich his personal experiences. That is why he decided to participate in the Winter School on Measure Theory in Liptovský Ján in 1993, which marked the beginning of a fruitful cooperation with his Slovak colleagues and friendship with marvellous people from Slovakia. The present book is the outcome of this wonderful cooperation and friendship which, hopefully, will continue for still many years to come.

The third author wants to thank Antonio Boccuto and Beloslav Riecan for the nice teamwork and friendship and Prof. Riecan for the scientific upbringing.

We would like to thank Prof. Štefan Schwabik for writing the foreword and Bentham Science Publishers, particularly Manager Bushra Siddiqui, for their support and efforts.