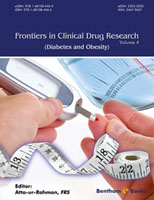 The clinical research series on diabetes and obesity drug development continue to bring forth new information about the progress in the field.


Frontiers in Clinical Drug Research – Diabetes and Obesity is a book series that brings updated reviews to readers interested in advances in the development of pharmaceutical agents for the treatment of two metabolic diseases – diabetes and obesity. The scope of the book series covers a range of topics including the medicinal chemistry, pharmacology, molecular biology and biochemistry of natural and synthetic drugs affecting endocrine and metabolic processes linked with diabetes and obesity. Reviews in this series also include research on specific receptor targets and pre-clinical / clinical findings on novel pharmaceutical agents. Frontiers in Clinical Drug Research – Diabetes and Obesity is a valuable resource for pharmaceutical scientists and postgraduate students seeking updated and critically important information for developing clinical trials and devising research plans in the field of diabetes and obesity research.


The latest volume of the series features 7 detailed reviews:


Prof. Dr. Atta-ur-Rahman, Ph.D. in organic chemistry from Cambridge University (1968), has over 1080 international publications in several fields of organic chemistry including 751 research publications, 37 international patents, 69 chapters in books and 222 books published largely by major U.S. and European presses. He is the Editor-in-Chief of eight European Chemistry journals. He is Editor of the world's leading encyclopedic series of volumes on natural products, Studies in Natural Product Chemistry, 54 volumes of which have been published under his Editorship by Elsevier during the last two decades