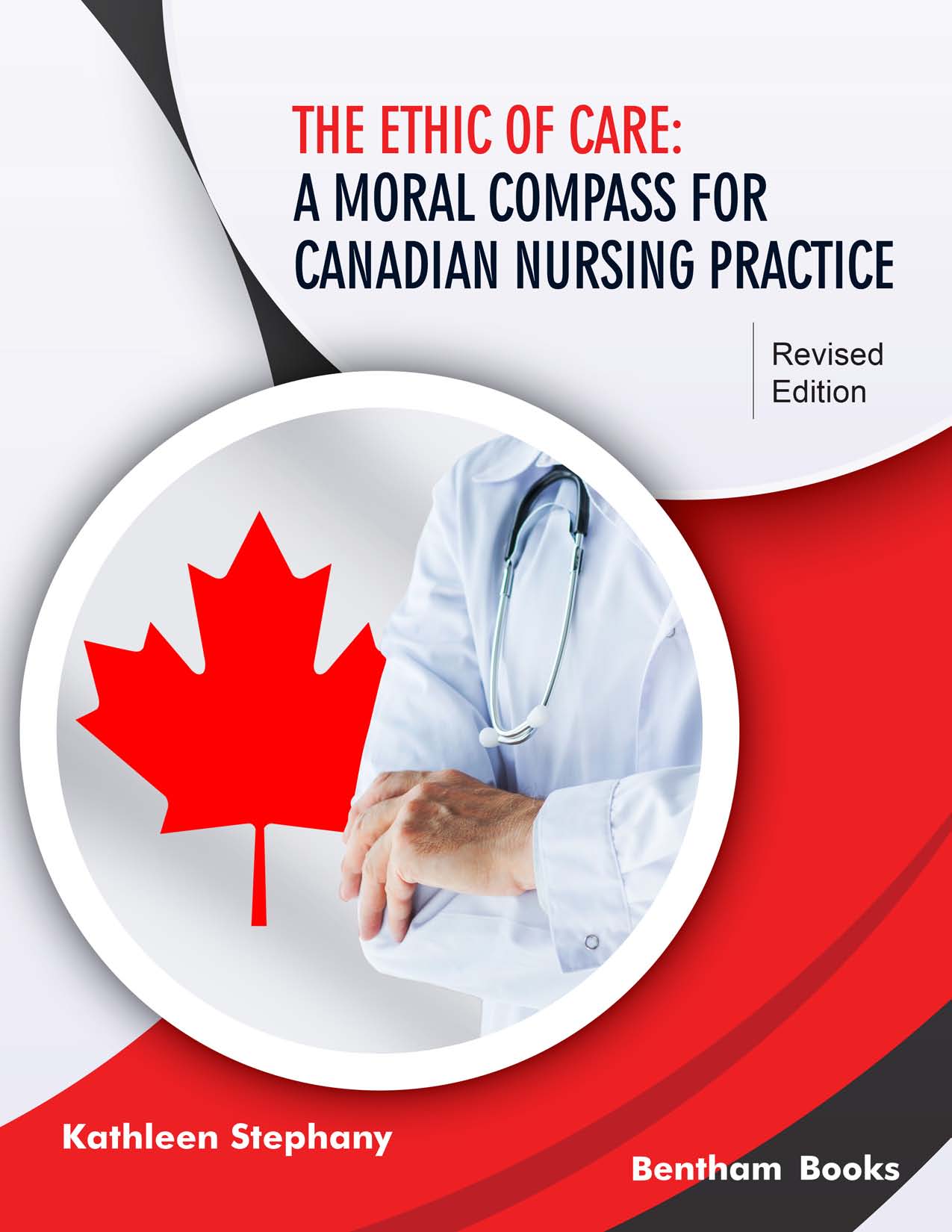 The Ethic of Care: A Moral Compass for Canadian Nursing Practice

There is an increased use of technology and informatics, heavier workloads and constant changes in the way in which disease processes are managed. Yet, when compared with other health professionals, nurses still spend a great deal of time in direct contact with patients and clients. They stay at the bedside, listen to their stories, give comfort and advocate.

The Ethic of Care: A Moral Compass for Canadian Nursing Practice is unique from other nursing ethics textbooks in several key ways. The book adds a heightened dimension to the already rich knowledge in the field of applied nursing ethics and the ethic of care. The author argues that the ethic of care, or the moral imperative to act justly, be the guiding compass for everything that nurses do. It is with passion and conviction that nurses are encouraged to embody the ethic of care as a "lived virtue." Nurses are also inspired to be the leaders of tomorrow by working toward achieving accountability and sustainability in the Canadian publicly funded health care system and by effectively addressing social inequities. At the end of each chapter the author conveys real life case studies, as derived from her experiences as a critical care nurse, psychiatric nurse clinician and former Coroner. These vignettes bring the subject to life and serve as a means for applying newly acquired ethical knowledge. The aim of this book is to inspire nurses to be as skillful, and compassionate as they can be so that they will leave every encounter with their clients, better than when they first arrived. The book attempts to inspire nurses to be ethical leaders for social change at the patient/client, community and global level.

This revised edition of the book includes additional information about trauma-informed care to combat systemic racism and improve the health outcomes for Indigenous people; ethics, gender and sexual orientation is dealt with in an inclusive and sensitive way, and a new Code of Conduct has been included.

“We do not live as isolated fragments, completely separate, but as parts of a great, dynamic, mutable whole.” Sharon Salzberg, Author of Lovingkindness: The Revolutionary Art of Happiness.

The ethic of care is the moral imperative to act justly. It is built on the premise that we are all interconnected, that humans are inherently good and that our relationships to one another matter. The ethic of care inspires us to honour and respect the lived experiences of others and to do whatever we can to end suffering, discrimination and social injustice. It has been greater than 37 years since the ethic of care began to inform moral decision making in nursing and it continues to be as valid today as it was back then. For example, today’s nurses face new ethical challenges due to the way in which health care delivery is implemented. There is an increased use of technology, heavier workloads and advances in the way in which disease processes are managed. Yet, when compared with other health professionals, nurses are still the ones who spend a great deal of time in direct contact with clients. Nurses do much more than give medications and perform treatments. They stay at the bedside, listen to their clients’ stories, empathize, give comfort and advocate. The aim of this book is to inspire nurses to be as skillful, and compassionate as they can be so that they will leave every encounter with their clients, better than when they first arrived.

In this book the following topics are covered with clarity and depth: caring notions, moral principles, the CNA Code of Ethics, legal issues, values clarification, professionalism, accountability, advocacy, gender issues, spirituality, challenges created by the advancement of technology and matters pertaining to social justice. Practical tools for ethical decision-making are offered to assist nurses to effectively deal with sorting through actual ethical dilemmas and moral distress. Nurses are encouraged to sincerely and wholeheartedly embrace diversity including the multiplicity of issues that relate to ethnicity, culture and gender. Worthy goals are recommended such as working toward achieving sustainability in the Canadian publicly funded health care system and ending social inequities. At the end of each chapter a Case in Point brings the subject of ethics to life and serves as a means for applying newly acquired ethical knowledge. Within some of the Chapters narratives will also sometimes be utilized to help elucidate specific explanations. Narratives are real situations and encourage an inductive process where a person can examine the notions of morality that are embedded in the story (Keatings & Smith, 2016).1

Changes to the Revised Edition

The revised edition of The Ethic of Care: A Moral Compass for Canadian Nursing Practice differs from the original textbook in several ways. Many of the quotes and pictures are new and the book is reformatted to be more accessible and easily read on hand-held devices. Outdated information has been corrected, new information added, and some of the material contained in the previous book has been condensed. Learning activities, new narratives, recommended readings and web resources have also been added.

Overview of New Additions to the Chapters

Each Chapter in this revised book includes exciting new content. Chapter One forms the foundation for everything else that follows and has been expanded upon significantly. A section on biomedical ethical theories has been included. The origins of the ethic of care has been more fully developed. Watson’s (2008) caritas dimensions for healing are presented followed by dynamic strategies to practice unconditional positive regard. Chapter Two focusses on moral principles and care. The topic of moral courage is intensified which includes identifying its key attributes.

The legal portion of Chapter Three contains a summary of exceptions for the duty to maintain confidentiality. Part I of the newly revised version of the Canadian Nurses Association (CNA) Code of Ethics (2017) is presented with attention to additional content such as, the nurse’s role in end of life care and medical assistance in dying (MAID). Chapter Four emphasizes the importance of values clarification and includes strategies to facilitate empathetic listening and to enhance self-care.

Chapter Five introduces tools for moral decision making in nursing in the form of a model and framework. In the first edition of this textbook nurses were presented with one model for ethical decision making, The Mosaic Model for Ethical Decisions (Stephany, 2012). This revised edition includes that tool but in a very condensed and easy to use form. A Framework for Ethical Decision Making has been added as an additional resource (Oberle & Bouchal, 2009). This framework has been added because it is applicable in many venues and it is highly recommended by the CNA Code of Ethics (2017).

Chapter Six combines professionalism and accountability to inspire nurses to act responsibly. Redundant information has been removed and the bulk of the content is focused on the ethical responsibilities expected of nurses. Chapter Seven promotes advocacy as the heart of nursing. The focus includes ethical endeavours that protect public access to health care and actions that promote social justice. Chapter Eight explores how constantly changing technological advances can enhance healthcare delivery but create new moral situations for nurses that keep changing. Chapter Nine encourages nurses to whole-heartedly embrace diversity and to practice trauma-informed care to combat systemic racism and improve the health outcomes for Indigenous peoples 2 (Allan & Smylie, 2015; First Nations Health Authority (FNHA), 2016). A new Code of Conduct for inclusion is also proposed for nursing.

Chapter Ten deals with the somewhat sensitive subject matter of ethics, gender and sexual orientation. The goal is to encourage nurses to move beyond tolerance and to accept and respect life choices that differ from their own. The discussion highlights the fact that persons who identify as lesbian, gay, bisexual, transgender, queer or questioning their sexual identity, and 2 spirit (LGBTQ2S), are often victims of both acute and chronic trauma. Members of this population are also not very well understood or treated well by health professionals. Additional education and training are key to changing some of these factors.

Chapter Eleven covers the topic of spirituality in nursing and very little has been changed in this edition. Chapter Twelve is completely new and introduces the topic of ethical nursing leadership where nurses are inspired to take on the challenge of being agents for change.

1Note: The details of all the Cases in Point, stories and narratives in this textbook have been altered sufficiently to ensure confidentiality.

2Note: In this textbook “Indigenous” is used as an inclusive and international term to describe individuals and collectives who consider themselves as being related to and/or having historical continuity with “First Peoples,” whose civilizations in what is now known as Canada, the United States, the Americas, the Pacific Islands, New Zealand, Australia, Asia, and Africa predate those of subsequent invading or colonizing populations (Allan & Smylie, 2015, p. 3).