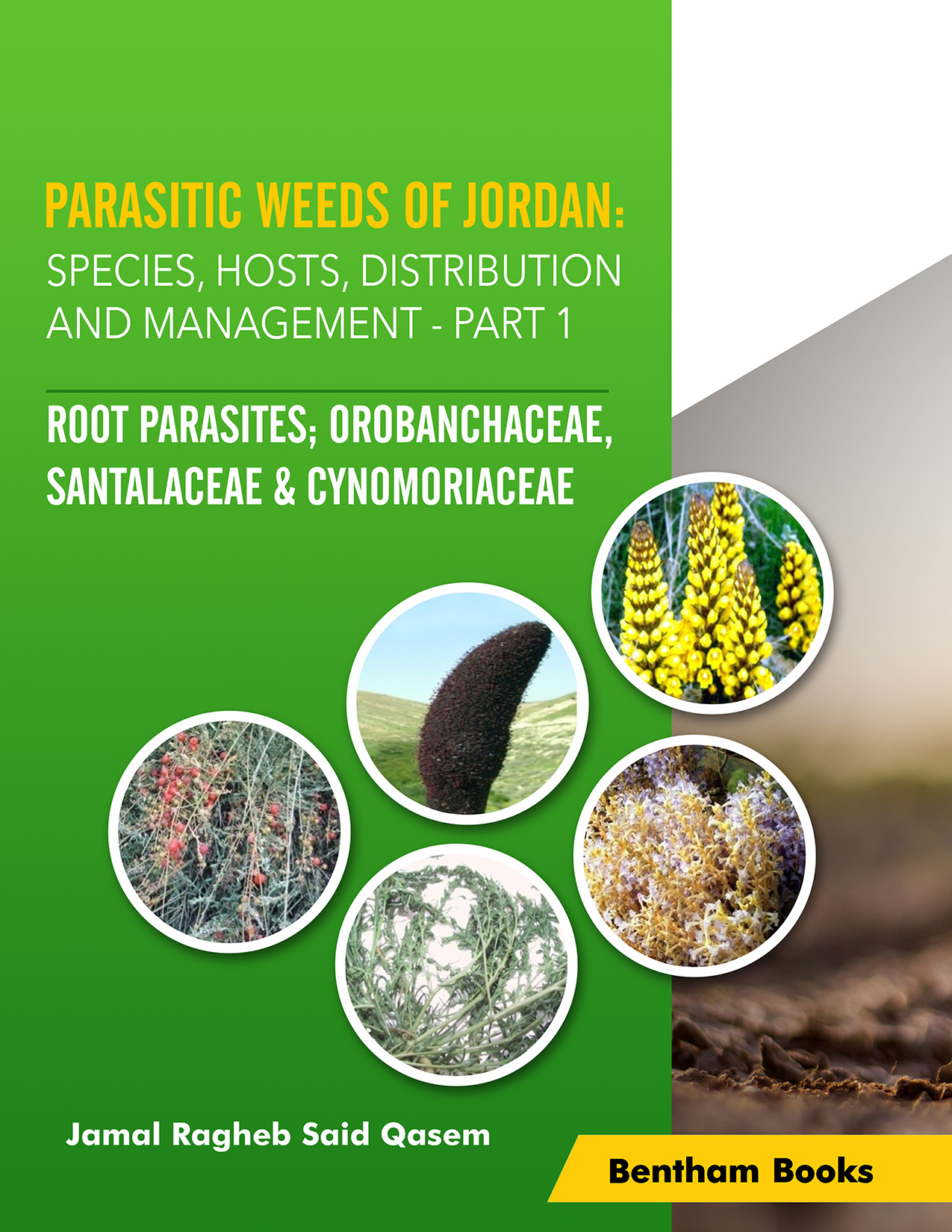 This book introduces the most recent research findings on selected parasitic weeds that occur in Jordan and are also spread in Middle Eastern countries. It is a valuable source of information for researchers, students as well as farmers, giving readers a better understanding of these regional parasites and their unusual growth patterns. The book set consists of two volumes. The first volume includes information about genera which are typically known as root parasites. These genera are Orobanchaceae, Santalaceae, and Cynomoriaceae families. The second volume covers stem parasites of the Cuscutaceae, Loranthaceae and Viscaceae families. The detailed information presented in this set makes this an essential reference on weeds and parasitic plants in Jordan and Middle Eastern regions.

Audience: Botanists, farmers, researchers in the field of agriculture and agronomics, with an interest in the flora of Jordan and the Middle East.

I preferred to start this book with a statement from one of our local farmers who owns an olive farm heavily attacked by the mistletoe (Viscum cruciatum) in the northern part of Jordan (Mediterranean biogeographical region, although our knowledge regarded the parasite as a tropical and subtropical). In the farmers’ reply on whether he knows what appears heavily attacking his trees? He simply replied, “this is the cancer of the trees”. In his brief answer, this farmer summarized the whole story of parasitic weeds. To this end, we should deeply think in the farmers’ words, why and how? Certainly, he tried to say that I can do nothing to relieve or save these trees but only wait for their death and removal from the field. He summarized the long lasting research work history for more than 150 years on these parasites and on all aspects. This conveyed that till now, the large volume of literature available on these species just brought a little but not an effective and absolute satisfying solution, while losses in plant growth and yield are extensive and brought total death and loss in most cases. Other worth mentioning is that broomrapes (Orobanche spp.) are called “Halook” in Arabic, which means exhaustive and destructive.

Parasitism is an unusual behavior difficult to understand or justify the reason/s behind it without rigorous research on all aspects of this phenomenon. Parasitic habit is against natures’ law that offers opportunities for individuals, populations, communities to obtain some or all of their needs to grow and exist. Therefore, competition may be the only logical mechanism in struggling for resources in nature at which the weak competitor is limited in growth or space it occupies or extinct. Parasitism is a different mechanism of negative interaction between plants in nature at which one organism depends and living at the expense of others for food and/ or water for part (hemi-parasites) or the entire life span (holo-parasites). Therefore, regardless of the quantity or quality of the resource/s captured by the host plant, these must be shared, mostly or totally directed to the parasite on the expenses of host species captured them from the environment. The prey has no choices but only to accommodate itself accordingly and cope with parasite aggression despite suffering partial or total death. The power of parasitism and the philosophy behind this behavior are not fully understood since exerted by an individual or a group on others of their kind (plant on another).

What is actually known till now is just a little on the life and behaviour of these parasites and thus, any chemical or control/management technique must consider the interrelations between the parasite and its host and possible injury to host plants, their normal growth, performance, physiology, biochemistry, existence, the value of the treatment and final yield of treated plants compared with parasite-infected but untreated plants in both growth and final yield. All these bring to mind the Ayat in The Holy Quran says, “They ask you about "the spirit". Say: "The spirit descends by the command of my Lord, but you have been given only a little knowledge."Quran, Surah Al-Isra ayat 85. Parasitic flowering plants or parasitic weeds are most destructive to many of the cultivated crops and wild species of all other weed species we observe in our fields, although not attacking all plant species but only their hosts. However, parasitic weeds attack plant species differ in growth habit and habitat and range between forestry climax species down to sand fixer desert shrubs and wild herbs as well as cultivated crops under different conditions. These are unique in relations with their hosts and peculiar in behaviour in all aspects at which every single issue in physiology, biology, ecology and behaviour is only a small part of a more general adopted strategy that needs to be deeply investigated and studied in order to understand the real story that stands behind it. Research on parasitic species requires a long-term experience, high training, and following up recent developments and literature on the worldwide achievements on the subject and persistence. The volume of literature available on parasitic weeds is huge and tackles all aspects of these species with hope of finding some information that may lead to better understanding, partial solution or some knowledge toward managing their spread and destructive effects on agricultural and eco-systems. To update, all factors appeared to play or positively impact these species, their existence and increases while the technological advancement in the control, including recent developed herbicides or control techniques, are still far from reality or partially solving the problems these exert on agro-ecosystem. However, management of parasitic species would never be possible without understanding their biology, physiology, biochemistry, ecology, distribution and genetics, as well as their external and internal nature of relations with host plants. All should be well considered in any integrated control program. The total number of parasitic weeds is approaching 5000 species worldwide; these are very well equipped with certain characters that enable their spread and existence, although many are not in direct contact with soil factors needed for germination and growth. Some of these characters include the huge number of seeds produced and long dormancy, host germination stimulant and preconditioning period required for germination of certain parasites, seed dispersal by nonspecialized agents, as well as through an active dispersal mechanism such as in mistletoes and Osyris. Adaptation to long and short distance dispersal that lead to the high vertical or horizontal spread of some of these parasites, ability to propagate sexually by seeds or/and vegetatively from the suckers embedded in host tissues for certain parasites (e.g., dodders, mistletoes and osyris), and their high compatibility to host plant physiology and biochemistry. However, the high number of these parasites in the world, their prolific seed production along with partial or total dependence on host plants for food and nutrients, their active dispersal by specialized and nonspecialized agents, absence of effective control measures, including the high technological measures all contributed in the wide spread and magnitude of the destructive effects they cause to a wide range of host species ranged from desert forage and range land species growing on poor sandy soil under severe drought conditions (Cistanche spp.) to species found under high annual rainfall and on rich clay organic soils as well as under rainfed and irrigated conditions (Orbanche spp.) and parasitic species in tropical and subtropical regions as well as in the Mediterranean’s such as mistletoes. However, more rigorous research is still needed to partially or significantly counteract the destructive effects parasites cause on agriculture and the environment. Intensive work should be directed toward better understanding the nature of host-parasite relationships, which must accompany extensive research on the management of these parasites through more general integrated weed control programs based on recent research developments on the subject. Therefore, basic and applied research work should go in parallel while integrated parasite control programmes must always be considered in managing parasitic species and reduce or eliminate their negative impact on the agroecosystem.

In the present book, eight parasitic genera of six plant families were included and discussed. Some of these are among the worlds’ important parasites, such as broomrapes, dodders, and mistletoes. I hardly tried to include basic information on parasitic families in Jordan to help readers gain knowledge on these parasites and their influences on vegetation, environment, food security, and human welfare. Species included under each family were dealt with separately, and basic information was provided along with updated research results on their control or management in general. The book illustrates coloured photos (where possible) of each parasite with its hosts, while tables included parasitic species and hosts with necessary information were presented. As an author with almost half a century of research work on weed control, including these parasites and mainly Orobanche, I feel that knowledge gained throughout the whole period is fair while great information is still unknown even on simple issues in relation to these parasites. We know that competition between individuals of certain parasitic species such as Orobanche on the root system of its host is evident and may be responsible partly for the differences in the development of parasite individuals on the host roots that range from a small haustorium to about to emerge and well developed parasite shoot and similar variations could be easily observed in mistletoe (Viscum individuals) subsisted on a single shoot of the host plant on which all stages can be observed at once on the same shoot or stem and ranged from germinated seed up to a fully developed and even fruiting parasite. However, this parasite can also exhibit self-parasitism, which is unusual and unpredictable. Therefore, the research achievements on these species and the deep strategy they adopted for the existence and continuity of their genetic lines are still not fully understood. Therefore, we can’t claim that their control is possible in the near future with the existing information available in literature, although extensive. Much in-depth and well-designed work is still needed worldwide and for all to learn and understand our local farmer's reply on the mistletoes attacking his olive trees which has summarized the whole story. I hope and ask God that literature and illustrations presented in this book would provide readers, researchers, farmers, and students with some useful information on parasitic species included and the problems these cause to agroecosystems although could be of some positive values of medicinal, ecological, ornamental and scenery to human society but for sure regardless of their general negative impacts they form a significant component of the agro-ecosystem that influence vegetation, soil cover and food production.