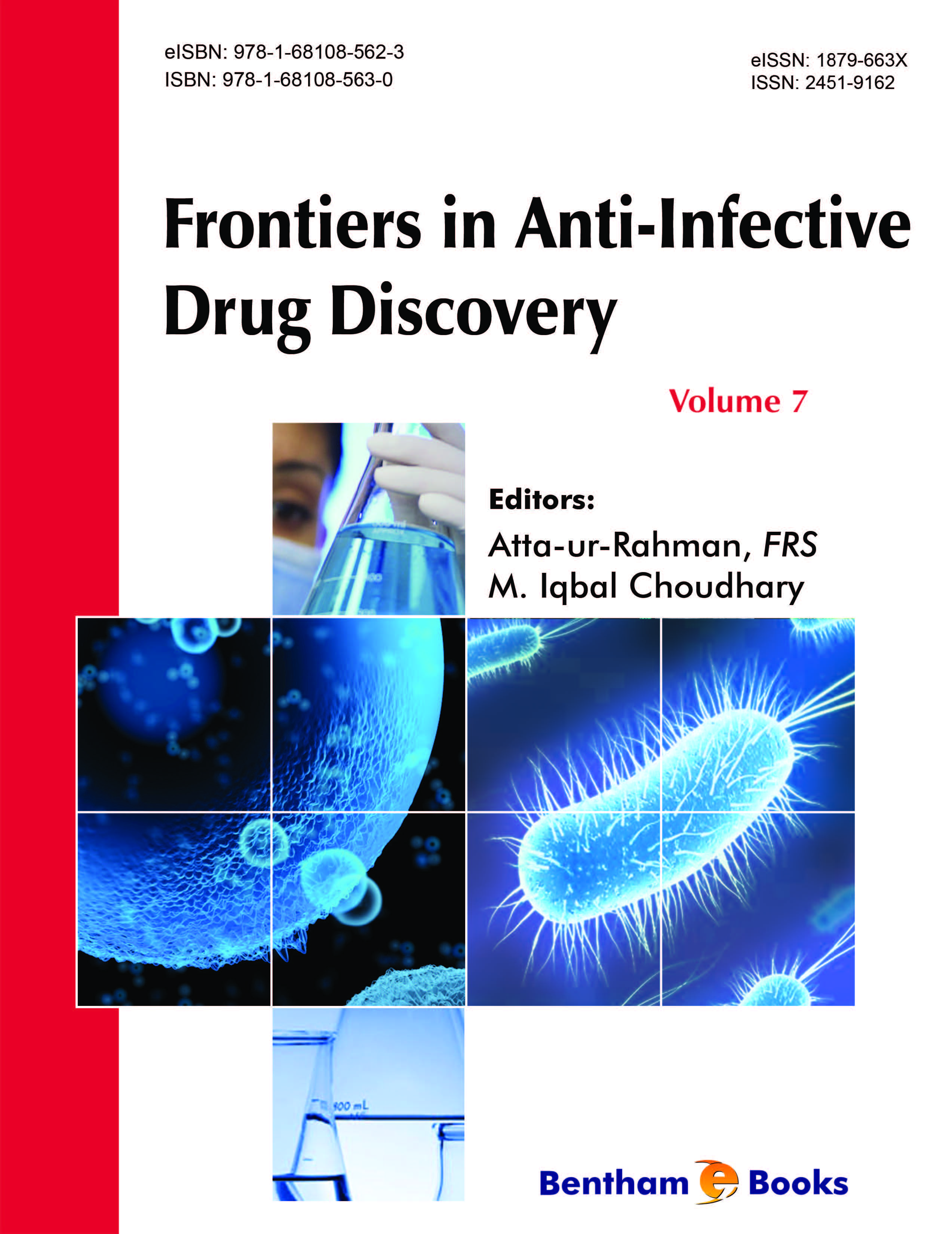 The seventh volume of this series features 7 chapters that cover the following topics:

The 7th volume of the book series entitled, “Frontiers in Anti-infective Drug Discovery” comprises seven comprehensively written reviews on therapeutic advances against bacterial, fungal, and viral infections and cancers, and on study of the mechanism of action of various drugs, and drug candidates, including natural products.

Amedei and Russo have reviewed the role of gut microbiota in the on-set and progression of gastrointestinal (GI) cancers in chapter 1. GI cancers are among the most prevalent cancers with complex aetiologies and high mortality rate. Along with many other factors, human gut microbiota has been found to play an important role in GI cancers. GI cancers are multifactorial diseases influenced by genetic and environmental factors, as well as by Helicobacter pylori infection. Association between the gut microorganisms and GI tumours has attracted major scientific interests in recent years. Modern sequencing techniques have been used to understand various features of the complex microbial communities, as well as the mechanisms through which the gut microbiota are involved in carcinogenesis and cancer progression. The authors have provided a detailed description of how microbial dysbiosis (microbial imbalance) contributes to oncogenesis via multiple pathways, including tumour progression and response to the cancer treatments.

Dengue viral fever has emerged as one of the most important epidemics in recent times. Its re-emergence in tropical and sub-tropical regions of the world is causing considerable morbidity and mortality. Currently, no vaccine is available which can protect against four serotypes of the Dengue virus (DENV) which are known to use host’s biological systems to propagate, and cause infections. These host biological processes include cytoplasmic and nuclear structures and components. Damonte et al have reviewed the recent literature in this important area of research in chapter 2. Their emphasis has been on the identification of host factors, and processes which are involved in viral infection.

Plant products have played a key role in the treatment of diseases since antiquity, including treatment of infections in the pre-antibiotics era. With the discovery of natural products and their synthetic analogues with good antibiotic activity, the importance of phytochemicals had diminished. However, with the emergence of antibiotic resistance, the search of new antibiotics including resistance reversal agents from the plant kingdom against novel targets, was globally initiated. Hazra et al in chapter 3 discuss various classes of plant secondary metabolites which have the capacity to serve as resistance modifying agents (RMA), thus helping conventional antibiotics to function again. The authors have discussed various screening approaches protocols which have been successfully used for the discovery of RMAs, as well as approaches to study their possible mechanism of actions. The discovery of plant-based RMAs is thus a powerful new approach for the treatment infections caused by multi-drug resistant bacteria.

Computer-aided drug design (CADD) has emerged as an important tool in the modern drug discovery and development process. CADD approach plays a key role in drug target identification, study of mechanism of action, as well as in the prediction of drug candidates in the initial drug discovery process. However, CADD-predicted compounds are often found to be ineffective in biochemical and cellular assays. Kaczor and his colleagues have reviewed the application and limitations of CADD approach in chapter 4. They critically analyse the strengths and weaknesses of CADD based lead identification in the context of antibacterial drug discovery and emphasize the need to further improve the CADD based methods, as well the need for experimental verification of computational results at an early phase of drug discovery process.

Since the FDA approval of first aptamer-based drug for the treatment of age-related macular degeneration in 2004, interest in therapeutic uses of aptamers has increased substantially. These molecules are capable of specifically binding with proteins, and inhibiting targets such as vascular endothelial growth factor (VEGF), thrombin and other cellular disease targets. These oligonucleotide aptamers are essentially the small molecular equivalent of antibodies, and thus have the advantage of being highly specific and non-immunogenic. Evran et al present a comprehensive review on the applications of small single-stranded RNA and DNA (oligonucleotide aptamers) as targeted therapies against virulence factors of drug resistance microorganisms in chapter 5. Many aptamers have been investigated and developed for the treatment of diseases, such as cancers, HIV, and macular degeneration. The review of Evran et al focuses on recent research on the use of various aptamers as specific blockers of the virulence factors of drug resistant pathogens. The authors have also reviewed the literature on the use of aptamers as biosensors of bacterial toxins.

Fungal skin infections are often difficult to treat completely due to their capacity to go in recession through spore formation. Candida albicans and its multidrug resistant strains are a major cause of superficial, and deep seeded infections in humans and livestock. The review by Hameed et al in chapter 6 addresses the approaches to overcome fungal infections by using natural products, that can act by blocking or modulating the functions of drug efflux pumps in MDR fungal pathogens. These natural products thus provide an excellent opportunity to treat MDR fungal infections, including Candida infections effectively.

Hydrogen sulfide (H2S) is an endogenous gaseous transmitter whose role in the pathophysiology of several diseases has been extensively studied. It has been linked to many important physiological functions and is known to play a significant role in various diseases involving inflammation, fibrosis, and vascular responses. Recent studies indicate the vasoactive, cytoprotective and anti-inflammatory role of hydrogen sulfide. It can regulate viral, bacterial, parasitic, and fungal infections through its function as signalling molecule. Bhatia et. al. has reviewed state-of-the-art understanding about the mechanisms underlying H2S—mediated regulation of different infectious diseases in chapter 7. This can help in developing H2S- releasing drugs as therapeutic molecules. In the absence of effective treatment for many infections, the H2S based therapeutic agents provide a new approach for infection treatment.

The above articles by prominent researchers in chosen fields have made this volume another important treatise for scientists and research scholars. We are grateful to all the authors for their excellent and scholarly contributions for the 7th volume of this internationally recognized eBook series. We hope that like the previous volumes of this internationally reputed book series, the current compilation will also receive a wide readership and appreciation.

The editorial team of Bentham Science Publishers is greatly appreciated for efficient processing and timely management of this publication. The coordination and liaison by Ms Fariya Zulfiqar (Assistant Manager Publications), and leadership of Mr. Mahmood Alam (Director Publications) are duly acknowledged.