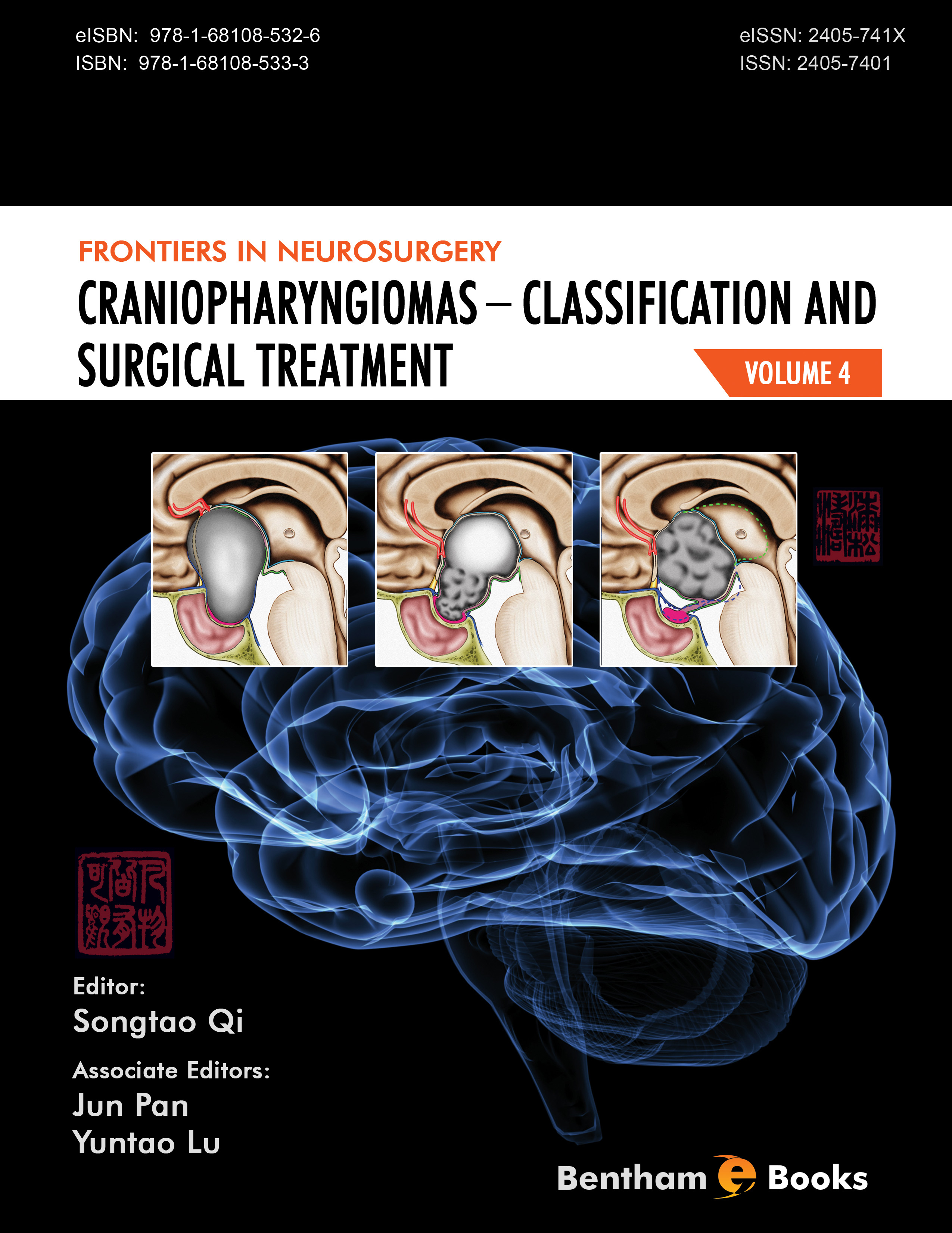 Craniopharyngiomas are a type of brain tumour in the suprasellar region with benign histological and cellular features. Clinical manifestations of craniopharyngiomas include decreased vision, hypopituitarism, hypothalamus dysfunction, fluid and electrolyte imbalance, glycometabolism, lipid metabolism and obesity. Craniopharyngiomas can show some characteristics of malignant tumours, such as invasion to the surrounding tissues, repetitious recurrence, and rapid growth. These characteristics cause considerable difficulty in patient treatment for neurosurgeons all over the world. This volume presents detailed information about craniopharyngioma anatomy, classification and treatment.

This reference is an essential information resource on craniopharyngiomas for neurosurgeons (adult and pediatric), neuro-endocrinologists, neuro-radiologists, ophthalmologists and medical residents.

In the 30th years of last century, Dr. Harvey Cushing, the great master of neurosurgery, stated that “craniopharyngioma (CP) is the most buffering problem to the neurosurgeon”. Although a century has since passed, this famous comment has been used frequently until now, indicating that the refractoriness of CP continues to challenge both patients and doctors.

During the past 10 years, epidemiological data regarding brain tumors have revealed that CP accounts for 6–9% of all intracranial tumors and 54% of pediatric tumors in the sellar region. Furthermore, the annual prevalence of CP within a given population was 1.3/million. The above data confirm that CP is not a rare type of tumor, but rather is a common intracranial tumor in pediatric patients.

Histopathologically, CP originates from residual embryonic Rathke’s cyst cells, which are associated with a benign tumor. However, given the extreme difficulty associated with surgical treatment, various treatments for malignant cancers, such as conventional radiotherapy, stereotactic radiosurgery, internal radiation therapy, and chemotherapy, have been accepted by many neurosurgery centers in different countries worldwide. Despite this acceptance, the high rate of recurrence, low quality of life, and low tumor-free survival rate associated with CP unfortunately have not been significantly altered. Taken together, these findings suggest that this benign tumor exhibits malignant biological behaviors.

Undoubtedly, surgery is the optimal treatment method for CP. In other words, CP is a strictly surgical disease, and thus surgery might be the only curative method. In light of the advanced development and applications of microsurgical techniques in the most recent half-century, radical surgical CP removal has become increasingly accepted by high-level skull base neurosurgeons, and several publications have reported gross total CP removal rates exceeding 80%. However, given the deep location of CPs in close proximity to vital structures, the high levels of difficulty associated with surgical removal and risk during the perioperative period remain major problems associated with surgical treatment. Regarding reasonable surgical treatment methods for CP, several masters of neurosurgery, including Pascau, Yasargil, and Kassam, summarized large numbers of clinical cases and published several important papers in which they used their experiences to propose methods for selecting the appropriate surgical approach and best intraoperative techniques. These authors also proposed several widely influential clinical classifications of CP, which remain in current usage. Invariably, those classifications accounted for the relationship between the tumor and the third ventricle, and described the anatomical occupation as a purely radiological classification. It is difficult for an inexperienced neurosurgeon to completely understand the true origin of CP, particularly the true relationship of the tumor with the hypothalamic structures. Terminology such as intra-extra-ventricular CP and non-strictly or strictly intra-ventricular CP led to tremendous confusion regarding whether the surgical treatment of CP would inevitably injure the hypothalamic structures. As a result, the concept of unresectable CP was proposed and is considered the primary reason for the wide acceptance of radiotherapeutic and chemotherapeutic treatment of CP.

Since 1998, our group has accumulated experience in the surgical treatment of CP, based on the principle of radical gross total removal, in more than 500 cases. First, we paid more attention to the anatomical location of the tumor, and subsequently we shifted our focus to the various origins of CP and the relationships between tumors and surrounding vital structures during the development of the various types of CP. Interestingly, the clinical outcome improved dramatically. As a result, we proposed a new classification for CP, according to the stratification of anatomical features and based on the tumor origin. A restored understanding of the anatomical details of CP and their applications resulted in the advanced development of surgical techniques and clinical treatments. Our histological and anatomical studies of the hypophyseal gland, pituitary stalk and third ventricular floor provided a foundation for our clinical applications with regard to sellar region surgery, and comprise a highlighted feature of this book. Of course, a book containing such important clinical and experimental data could not have been completed only by the named authors. We therefore offer our appreciation for all students and observers who have ever studied at our clinical center, all technicians in our laboratory, and the secretaries in my office.

An understanding of CP, as well as difficulties of perioperative treatment and long-term hormone substitution, are likely to become strictly required for relevant workers, along with increased patience, thanksgiving and compassion. It is encouraging to note that this attitude has been accepted, inherited, and forwarded by all members of our team. I believe that this quality will not only benefit patients, but will also fill our own lives like a sunny and inspiring breeze.

I dedicate this book to all patients and their families for placing their trust in us. In addition, we offer the greatest appreciation to our unsung families for their tremendous and uncomplaining dedication.