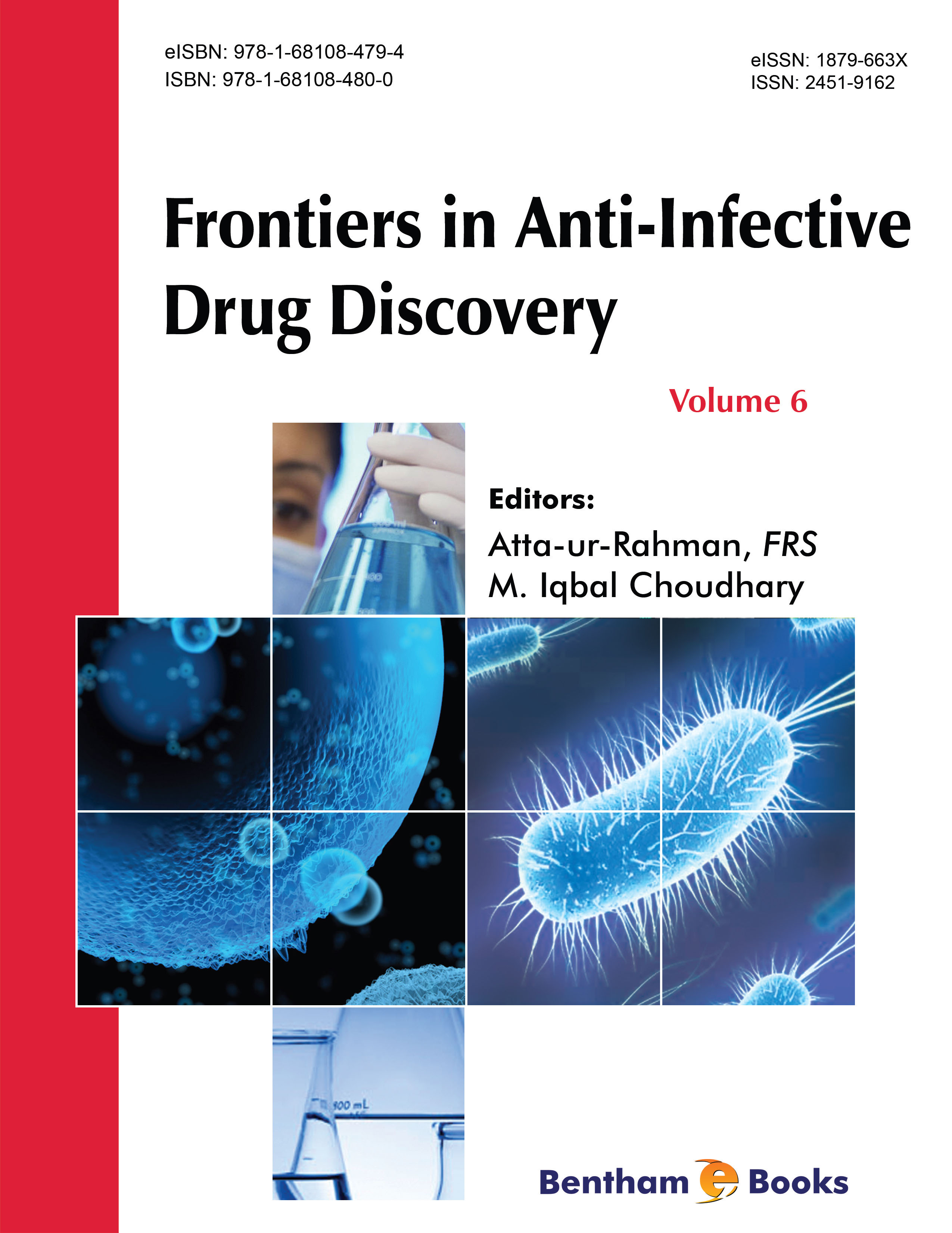 The sixth volume of this series features 6 chapters that cover the following topics:

Infections kill more people than all other diseases combined. Despite the tremendous development in this field, infections are increasingly difficult to treat today because of the development of organisms resistant to antibiotics. Human sufferings because of bacterial, fungal, parasitic, and viral infections are therefore likely to increase many fold in the new future. Emerging antibiotic resistance in all infection-causing microorganisms is making many believe that the era of antibiotics is coming to an end. Recent reports establish that the chances of dying from hospital-acquired pneumonia or septicaemia are much higher from drug-resistant infections. In this context, extensive research, both in academia and in pharmaceutical industries, has begun, covering various aspects of this complex topic, such as infection biology, genomics of resistance, new drug target identification, and search for new antibiotics. It is often difficult, even for a prolific reader, to keep pace with these exciting developments. Thus, the need of a comprehensive book review series is greatly felt. The present series of volumes, partly addresses this need.

The last five volumes of the ebook series “Frontiers in Anti-Infective Drug Discovery” have attracted great scientific interest, as a welcome addition to the global literature in this active area of research. The present volume of this internationally recognized books series comprises of six carefully selected reviews on various aspects of infection, etiology, and treatment, contributed by leading experts in this field. Each review is focused on important aspects of anti-infection drug discovery and development, based on various innovative approaches, including relationship between infections and neurological disorders, identification of new molecular targets, outcomes of pre-clinical and clinical studies on new and novel classes of antimicrobial and antiviral drugs, combination therapies, and strategies to overcome emerging antibiotic resistance.

Pantazaki et al., have reviewed some of the most striking recent reports on the relationship of infectious and inflammatory etiology with the on-set of Alzheimer’s diseases (AD). Recent research has shown that many microorganisms, such as bacteria (Helicobacter pylori), viruses (Herpes simplex virus, influenza, CMV, etc.) and fungi can cause AD. It has been reported that these microorganisms and viruses can cross the blood brain membrane and cause mild to severe infections in the brain. Persistent or acute neuronal and peripheral inflammatory response against these infectious agents lead to accumulation of amyloid protein aggregates which are the major cause of AD. It has also been reported that an alternation in normal gut microbiota can cause the accumulation of functional amyloid proteins which are then transported to the Central Nervous System (CNS) causing neurologic and psychiatric disorders, such as schizophrenia, anxiety, and AD. The review provides an interesting description of the effects of chronic inflammatory responses against immune-reactive proteins as risk factors for nervous system disorders. The authors have also recommended the consumption of natural products and natural diets, such as Mediterranean and Asian diets, which are capable of preventing AD or reducing the risk of AD, and strengthening the body’s ability to confront infections. In brief, this review is a comprehensive commentary based on recent literature on the possible relationship between the infection, microbiota and the on-set of Alzheimer’s diseases. The authors thus support the use of chemotherapeutic and dietary approaches for the prevention of AD.

The review contributed by Dwivedi et al., focuses on the conventional and current treatments of malaria comprising of natural substances and synthetic analogues. The choice of therapeutic agents against malaria depends on the species of parasite, the pattern of resistance, and the seriousness of the infection. Despite major developments in the understanding of the aetiology of malaria at the molecular level, and the introduction of new drugs, the disease is causing considerable morbidity and mortality in Asia, South America, and Sub-Saharan Africa. According the WHO, malaria kills more people world-wide than all other parasitic diseases taken together. The emergence and spread of multidrug resistant strains of malarial parasites have further limited the choice of antimalarial chemotherapeutics. This highlights the urgent need of efficient research for developing newer and broad spectrum antimalarial drugs. The development of an effective malaria vaccines has remained a major challenge for scientists, with only limited success achieved so far. This review highlights the importance of the development of new drug delivery systems which maximize the on-site effect and minimize the adverse effects of existing antimalarial drugs. Recent development of nanoparticles as careers for malaria chemotherapy which can minimize the side effects and improve bioavailability and selectivity of the drugs has also been discussed in this review. The authors have emphasized the need for continuous search for antimalarial drugs, giving the example of arteether (ART) and bulaquin. The review provides a comprehensive account of challenges and opportunities in malarial chemotherapy, and proposes several directions for future research in this important field.

Zehra Küçükbay and Hasan Küçükbay have contributed a chapter on recent developments in the field of novel antibiotics and antimicrobial agents. Their review presents merits and demerits of various classes of antibiotics, such as b-lactams, macrolides, fluoroquinolones, tetracyclines, and aminoglycosides, in the context of emerging resistance against them. The authors have focused on natural products as possible antimalarial agents which can circumvent the emerging resistance issues while having limited side-effects. By providing examples of fascinating natural products used against infections such as aspirin (willow plant), opioids (opium poppy), atropine (Atropa belladonna), and quinine (cinchona), the authors have advocated the need for searching natural chemical diversity as a source of new antimicrobial and resistance-reversal agents against increasingly resistant infections. This review thus provides an in-depth look at the most significant developments in antimalarial drug development and prospects of natural products as sources of new antimalarial drugs.

Tuberculosis or TB is among the most serious infectious diseases that can affect almost any tissue of the body, especially the lungs. Once considered to be a disease of the developing world, TB has recently emerged in the developed world as a co-infection along with HIV, since people with a compromised immune system develop TB very quickly. Many strains of Mycobacterium have now developed resistance against the arsenal of available drugs, making the treatment increasingly difficult. TB patients are now required to take several types of medications for long durations to eradicate the infection, prevent relapse, and avoid the development of antibiotic resistance. Recently two drugs, Bedaquiline and Delamanid, have received conditional approvals for the treatment of MDR-TB, for patients where other treatments fail. Jawed Ahsan has reviewed the recent developments in the TB chemotherapy, including new and repurposed antitubercular drugs in advanced phases of clinical trials. He has also commented on various vaccine candidates which are in clinical development. The review also discusses the need of new diagnostics, and anti-TB drugs as well as TB vaccines to control the spread of TB pandemic in the developing and the developed world.

Naseem Ahmed has contributed a review on widespread hepatitis viral infectious disease and its treatment. Hepatitis is wide spread, particularly in the poor regions of the world. Various forms of the hepatitis virus (hepatitis A- E) are wreaking havoc to many the health care systems of the developing world. Among the various forms, hepatitis A, B, C, D, and E are the most common. Over a billion people are estimated to be either patients or carrier of hepatitis. Cases of non-viral, and autoimmune hepatitis are widely reported due to alcohol consumption, use of medications against chronic disorders, and spread of autoimmune diseases. Current treatment options are often expensive, and beyond the reach of poor patients. However recent developments in this field have been very promising. Interferons alone or pegylated interferons have been used with 35-40% success, and numerous side effects. New medicines which target NS3/4A protease, NS5B polymerase, and NS5A enzymes have been developed with phenomenal success of 70-90%. Several other inhibitors of NS5B and NS5A polymerase targets are in various stages of development. The chapter provides an excellent review of the recent literature on new antiviral drug development, identification of new targets, investigational and novel therapies and most importantly merits and demerits of existing anti-hepatitis medicines.

Finally, the review by Shukla et al., is focused on the discovery and development of various classes of natural and synthetic peptides and polypeptides as novel anti-infective agents as well as structure -function relationships. The emergence of resistance has led to the development of non-classical antibiotics, including peptide antibiotics, especially cationic peptides. Several thousands of such peptides have been isolated from natural sources (plants, animals, microbial, etc), and many more have been synthesized. However only a few have entered into clinical trials. As antimicrobial peptides (AMPs) kill bacteria quickly by the physical disruption of cell membranes, the emergence of resistance against them is less likely. The authors have also discussed various aspects of uses of AMPs, including their possible use as delivery vectors to transport the cell impermeable drugs to the cell interior. Their diverse and broad spectrum antimicrobial activity has been described in literature. These peptides offer a potentially rich source of novel antimicrobial agents. The authors have presented numerous examples of AMPs along with reports of modifications in the existing peptides, isolation of novel peptides from nature, the introduction of non-natural amino acids in their structures, and their mechanisms of action.

We are pleased to express our gratitude to all the authors of the above cited reviews for their excellent scholarly contributions to the 6th volume of this ebook series. We also appreciate the efforts of the brilliant publication team of Bentham Science Publishers for the efficient processing of the treatise. The skills and efforts of Ms. Fariya Zulfiqar (Assistant Manager Publications) & Mr. Shehzad Naqvi (Manager Publications), and excellent management of Mr. Mahmood Alam (Director Publications) are greatly appreciated. We also hope that like the previous volumes of this internationally recognized book series, the current volume will also receive a wide readership from scientists and research students.