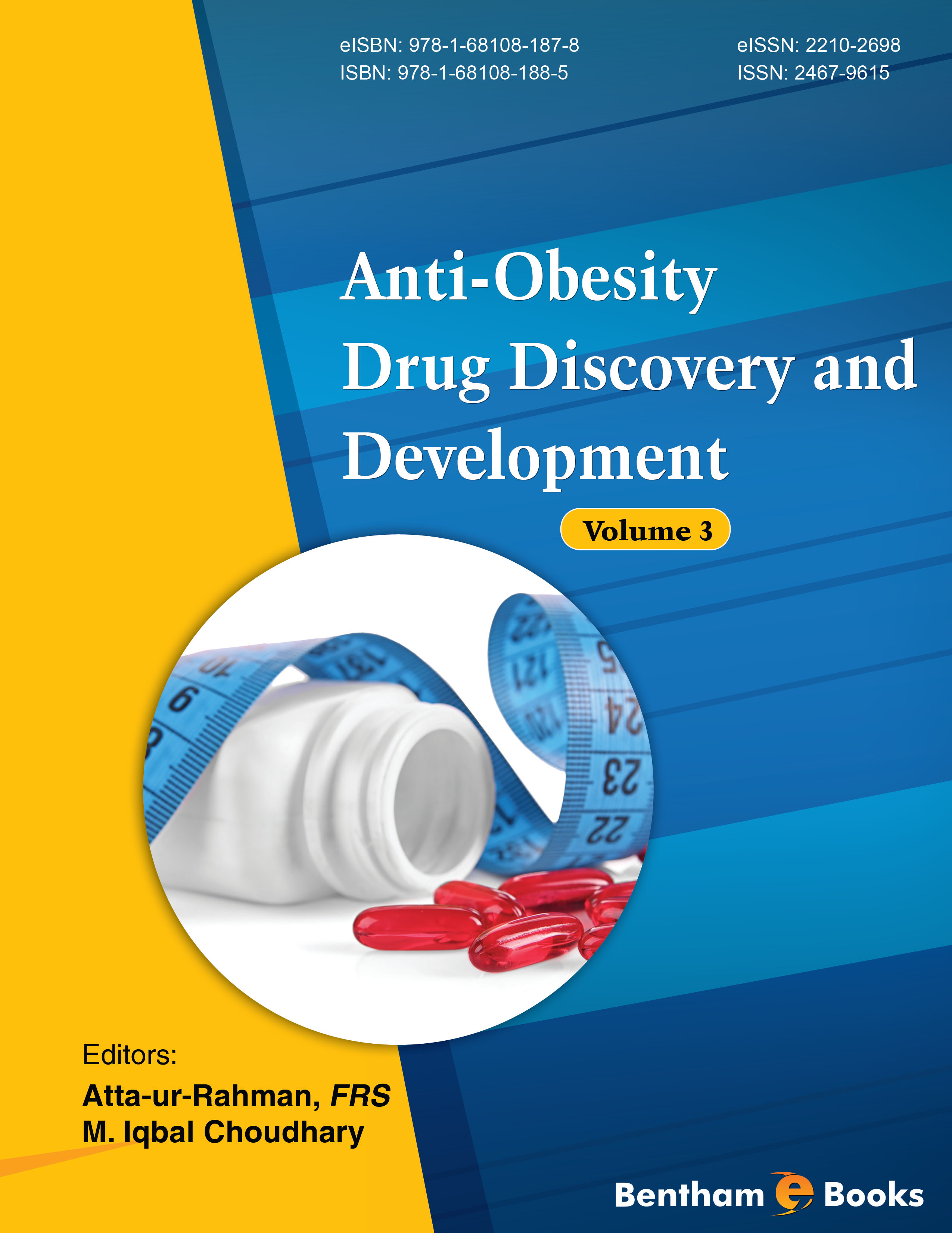 Obesity is a complex health problem, caused by a number of factors such as excessive food intake, lack of physical activity, genetic predisposition, endocrine disorders, medications and psychiatric illnesses. Onset of obesity in both the developing and the developed world has reached epidemic proportions. In response to this, efforts to control and treat obesity have also been vigorously pursued, ranging from raising awareness about lifestyle changes to the discovery and development of safe and effective anti-obesity drugs.

Anti-obesity Drug Discovery and Development is focused on this very important area of healthcare research. The third volume of this series is dedicated to anti-obesity treatments including updates on new therapeutics for obesity, Nesfatin-1 and its therapeutic uses, the role of proteomics in pediatric anti-obesity treatment, the role of oxidative stress in childhood obesity and a review of data on gut microbiota as a treatment option for obesity.

An epidemic of obesity is among the most important global healthcare challenges of the 21st century, causing considerable morbidity and mortality in a large segment of human population. Obesity has been identified as the largest preventable cause of numerous diseases. Obese and overweight population are at risk for a number of conditions, including high cholesterol levels, high blood pressure, heart diseases, diabetes, bone problems, skin diseases, neurological and psychological disorders, and increased chances of various malignancies. At individual level, obesity adversely effects the state of health and the quality of life, whereas at national level, it is a significant burden on the current healthcare systems. Unfortunately existing anti-obesity drugs are associated with numerous side effects, and are only prescribed when the benefits of treatment outweigh their risks.

The regulation of body weight is a complex process which involves cascades of mechanisms, including a variety of neuropeptides and transmitters in the brain, and endocrine and metabolic signalling molecules. Many of these processes are only superficially understood and extensive research is being conducted to decipher the complex biomolecular pathways behind the obesity syndrome. Understanding these inherent pathways, as well as the role of other factors, such as dietary habits, physical activities, gut microflora, etc. is critically important in devising successful strategies to combat obesity epidemics, including the discovery and development of improved treatments.

The 3rd volume of the book series entitled “Anti-Obesity Drug Discovery and Development” presents the most exciting recent developments in the field of obesity and its treatment. This book comprises five authoritative reviews ranging from identification of new drug targets to novel pharmacological and non-pharmacological interventions.

The first chapter by Ohta et al. presents a comprehensive account of recent literature on various treatment options available for obesity. Primary treatment of obesity disorder involves dietary restrictions, and exercise. However, in many cases, pharmacotherapy is imperative. The authors have categorised anti-obesity drugs into three classes, i.e. appetite suppressors, agents which inhibit nutritional absorptions, and drugs which accelerate energy expenditures. Various molecular targets in all three categories have been described, with merits and demerits of drugs developed against them.

Nesfatin-1 is a peptide which has attracted considerable attention as a possible antibody treatment of obesity. Nesfatin-1 is secreted by peripheral tissues, central and peripheral nervous system and it can pass the blood-brain barrier. It is involved in the regulation of energy homeostasis related with food regulation and water intake. It suppresses the urge for food independently from the leptin pathway and increases insulin secretion of the pancreatic beta islet cells. The use of Nesfatin-1 for the treatment of obesity has been widely investigated. Finelli has contributed a comprehensive review in chapter 2 on the potential of Nesfatin-1 as a new treatment for obesity and related disorders, its effects on other physiological parameters and the proposed mechanisms of action.

In chapter 3, Walker et al. focus on obesity in children, and identification of appropriate drug targets. Paediatric obesity is a growing menace with increasing prevalence globally. Overweight and obese children are at high risk of becoming overweight adolescents and adults, developing chronic diseases, such as heart disease and diabetes later in life. They are also more prone to develop stress, sadness, and low self-esteem. Adipose tissues (AT) play an important role in obesity. AT dysfunction leads to chronic inflammation, weight homeostasis, and insulin resistance. Understanding AT dysfunction at receptors and secondary messenger pathways is critically important in understanding the unique features of paediatric obesity at molecular levels. The authors have reviewed recent advances in the field of proteomics technologies with reference to their use in identifying key components of adipose proteome. This helps in understanding the pathogenesis of adipose tissue dysfunction in obesity

Mancini et al. have contributed a chapter on vascular, histopathological and metabolic changes that occur in obese children, which in many cases lead to metabolic syndrome, such as insulin resistance, type 2 diabetes, dyslipidemia, endothelial dysfunctions and cardiovascular disorders. The authors have focussed on the role of neuroendocrine peptides and cytokines in chronic inflammation and oxidative stress (OS). These mediators of chronic inflammation and OS are produced in adipose tissues, and are thus, directly responsible for endothelial dysfunction and insulin resistance. An extensive commentary on the role of oxidative stress in the onset of various obesity related diseases, such as atherogenesis and diabetes, is presented. Based on this, the authors have moved on to discuss the strategies to lower the chronic inflammation and oxidative stress in childhood obesity in order to prevent metabolic syndrome.

Gut microflora are perceived to play an important role in the prevention of various diseases, including obesity. Comparative studies have been conducted on bacterial flora of obese and lean individuals, and substantial differences were recorded. The disequilibrium in the composition of microorganisms that inhabit the human body can cause various diseases. High-throughput sequencing techniques and new tools used in bioinformatics have indicated strong relationships between the gut microbiota, and host's physiology. Disruption of the ecological equilibrium in the gut is called dysbiosis. Diet is a strong determinant of gut microbial balance. In chapter 5, Johnson et al. present a comprehensive discussion on state-of the-art understanding of the role of intestinal dysbiosis in the on-set of obesity disorder. They reviewed the most recent literature on the restoration of microflora in gut as a novel therapeutic option against the obesity epidemics. Strategies for the manipulation of intestinal microflora, such as antibiotic therapy against xenobiotic flora, supplementation of normal flora through probiotics and prebiotics and symbiotics (combination of probiotics and prebiotics), fecal microbiota transplant, etc. have been discussed. The role of intestinal microflora in metabolic programming is also extensively discussed.

In brief, the above cited reviews contributed by leading researchers in the field make this volume an interesting and useful reading for scientists and graduate students. We wish to express our felicitation and gratitude to all the authors for their excellent and scholarly contributions for the 3rd volume of this reputed series. We also greatly appreciate the efforts of the entire team of Bentham Science Publishers for efficient processing and timely management of the publication. The efforts of Ms. Faryal Sami (Assistant Manager Publications), Mr. Shehzad Naqvi (Senior Manager Publications) and the leadership of Mr. Mahmood Alam (Director Publications) are specially praiseworthy. We hope that like the previous volumes of this internationally recognized book series, the current compilation will also receive a wide readership and appreciation.