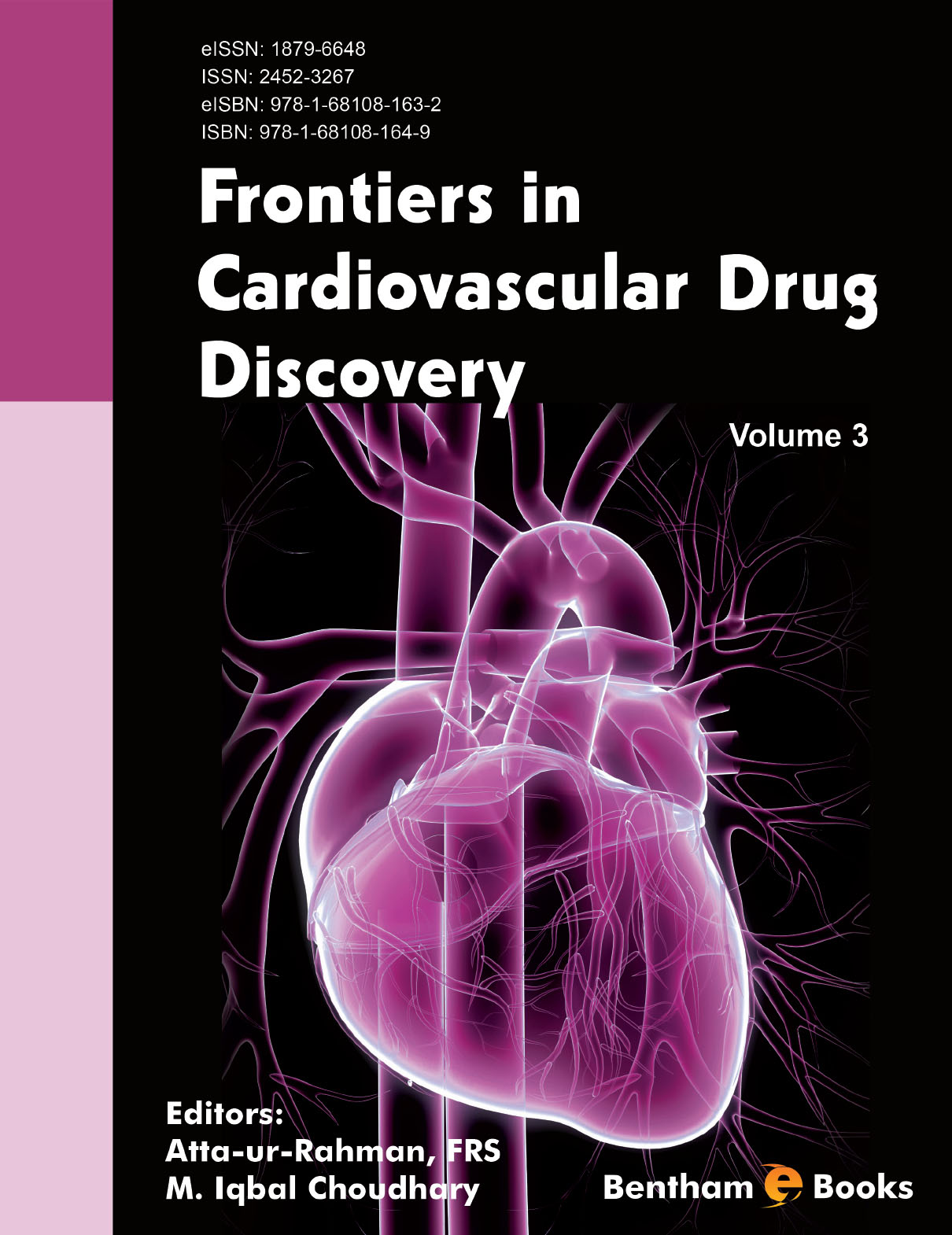 Frontiers in Cardiovascular Drug Discovery is an eBook series devoted to publishing the latest advances in cardiovascular drug design and discovery. Each volume brings reviews on the biochemistry, in-silico drug design, combinatorial chemistry, high-throughput screening, drug targets, recent important patents, and structure-activity relationships of molecules used in cardiovascular therapy. The eBook series should prove to be of great interest to all medicinal chemists and pharmaceutical scientists involved in preclinical and clinical research in cardiology.

The third volume of the series covers the following topics:

-Vasopressin and the cardiovascular system

Cardiovascular diseases are the major cause of morbidly and mortality in humans. Despite major advancements in cardiovascular drug discovery and development, heart diseases and stroke remain the leading public health concern and primary causes of death globally. The development of effective and safe medicines that control blood pressure and cholesterol has significantly reduced the death rate from heart diseases. However, with global rise in metabolic disorders and aging populations, the prevalence of hypertension, high cholesterol, and diabetes is increasing. Heart diseases and stroke are becoming a worldwide pandemic as developing nations are witnessing the increasing health burden caused by them. To tackle this problem, tremendous research work has been conducted to understand the cause of cardiovascular diseases at molecular levels. This has led to the identification of new drug targets which are now vigorously studied.

The 3rd volume of the ebook series, “Frontiers in Cardiovascular Drug Discovery” comprises six comprehensive reviews, contributed by leading experts in these fields. Each review is focused on a certain important aspect of cardiovascular drug discovery and development, including the identification of new molecular targets and the outcome of clinical studies.

Boukhris et al. have contributed a review on P2Y12 receptor antagonists as efficient treatment of platelet dysfunctions, including platelet aggregation and thrombus formation. The authors have comprehensively reviewed the role of P2Y12 receptors in thrombus formation, and the mechanism of action of various classes of P2Y12 receptor antagonists as anti-platelets agents. They also present the literature pertaining to the clinical outcome of efficacy and safety of various new generation of anti-platelet drugs, as well as prospects of tailored or individualized anti-platelet therapy for improving the clinical outcome.

Amit Agrawal reviews the role of vasopressin (arginine vasopressin) in cardiovascular health. Vasopressin is an anti-diuretic hormone which performs many essential functions in the body including maintaining plasma osmolality and volume. It has a direct impact on cardiovascular functions. A key function of AVP in the body is to regulate the extracellular fluid volume by regulating the renal handling of water. Vasopressin acts on renal collecting ducts via V2 receptors to increase water permeability (cAMP-dependent mechanism), which leads to decreased urine formation and thus increases the blood volume, cardiac output, and arterial pressures. Over the years, synthetic vasopressin has emerged as an important drug for the treatment of various shock states. The author has elegantly reviewed various uses of vasopressin in critical care, especially in the treatment of vasodilatory shock. The commentary on mechanism of action of vasopressin at molecular and receptor levels provides insight into the action of this smart drug which is finding new uses with every passing day.

Cerebral small vessel disease (CSVD) or microangiopathy is a group of diseases involving microangiopathy and unspecific arteriopathy. This is a common risk factor for cognitive impairment, characterized by hypertrophy, vascular modification, and endothelial dysfunction that alter cerebrovascular functions, and auto-regulation of cerebral blood flow. CSVDs increase the risk of ischemia and tissue bleeding and may be categorized into six classes, based on the tissue types that they affect. The review by Alvarez-Parez focuses on type 1 CSVD, which is among the most common conditions, also called arteriolosclerosis. It is associated with aging, arterial hypertension, and diabetes. The author reviews the literature on the etiology and treatment of type 1 CSVD. Various classes of anti-aggregant drugs (aspirin, ticlopidine, and aspirin plus other drugs) have shown efficacy in this condition. The results of clinical studies on various classes of drugs have been discussed in this excellent review.

Shagdarsuren et al. have contributed a review on recent developments on a novel class of therapeutic agents which block and disable the complement blocking system. The complement cascade is an integral component of the body’s innate immune system, which boosts the capacity of antibodies and phagocytic cells to clear the invading microorganisms and damaged cells from the body. The complement system is involved in promoting inflammation in various pathological conditions. Most importantly, the complement cascade is known to be involved in obesity, fatty liver, diabetes and cardiovascular diseases (CVD). The complement system comprising several complex small proteins and their receptors, is known to be activated in cardiovascular diseases. This has attracted major scientific interests in various complement molecules /components as new therapeutic targets. The authors present an excellent commentary on various complement molecules, their primary and secondary receptors, and their functional roles in the onset and progression of CVDs. They have also summarized the beneficial results observed in various pre-clinical studies conducted on targeting of specific components of the complement system in CVD animal models. This new class of drugs which includes gene targeting agents, neutralizing antibodies, and small molecular inhibitors, holds great promise for the treatment of CVDs in future.

The editors wish to express profound gratitude to all the contributors for the timely submission of their review articles for the 3rd volume of the eBook series. We also appreciate the efforts of the entire team of Bentham Science Publishers for efficient processing. The efforts of Mr. Omer Shafi (Assistant Manager Publications), Mr. Shehzad Naqvi (Manager Publications) and team leader Mr. Mahmood Alam (Director Publications) for their assistance in putting together an excellent compilation of well written articles in this important field of biomedical research. We sincerely hope that this volume will receive wide appreciation from readers.