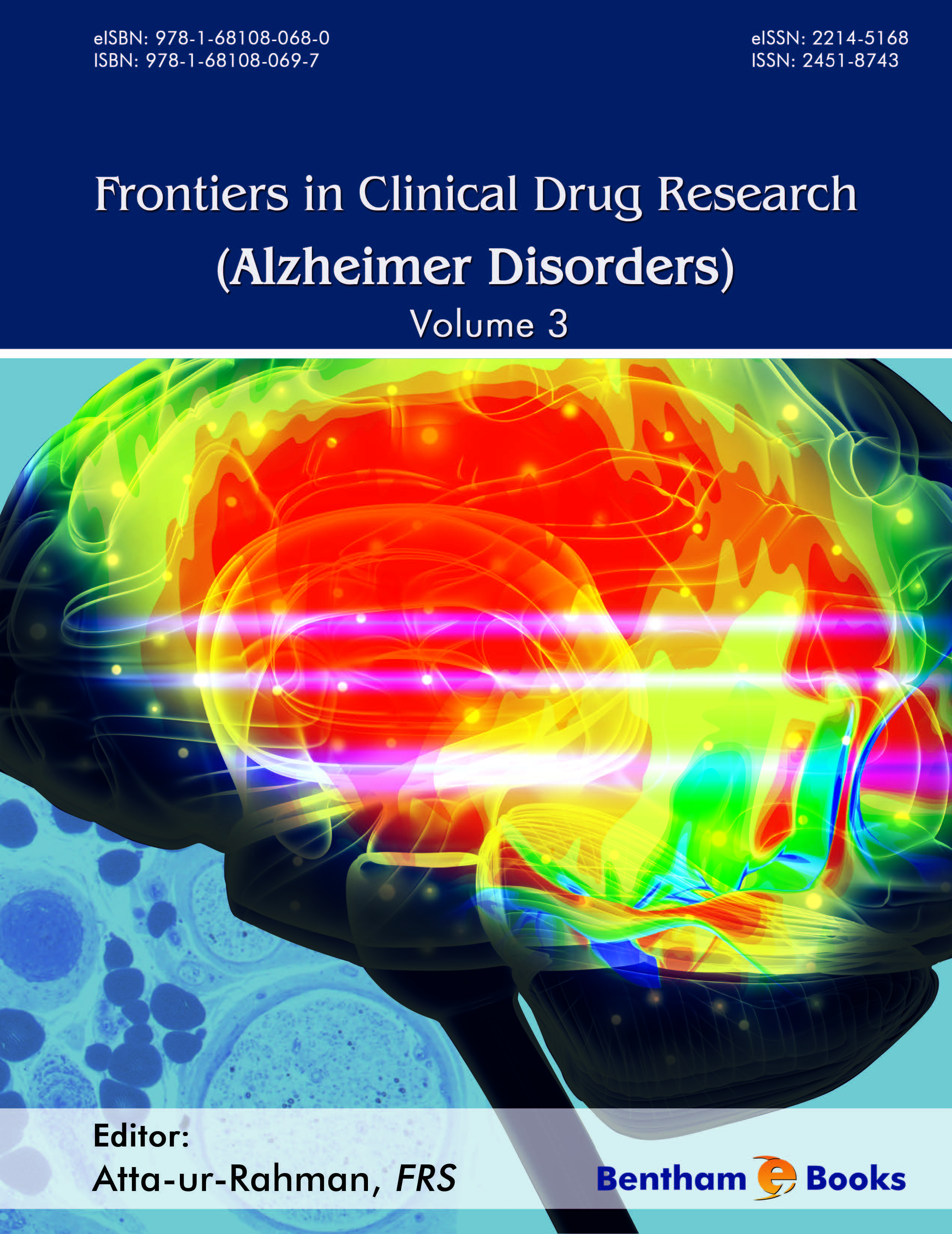 Alzheimer’s disease (AD) is the most common age-related multifactorial neurodegenerative disease, which is described as the failure of cognitive performance and behavioral capabilities. With the progression and development of this disease, neurodegeneration in the brain can finally lead to dementia.

Many researchers are striving to understand, slow down the onset and eventually cure AD. The present 3rd volume of “Frontiers in Clinical Drug Research – Alzheimer Disorders”, presents some of the most recent and remarkable advances in the field, in the form of cutting edge reviews written by eminent experts. It is a compilation of five well written chapters that include advances in therapeutic management, new strategies and evidence-based treatment and prevention Alzheimer’s disease.

Biomarkers have served an important role for the diagnosis and for monitoring the progression of Alzheimer’s disease (AD). Moretti et al. in Chapter 1 describe a study involving the association between alpha3/alpha2 frequency power ratio with rCBF changes in subjects with mild cognitive impairment (MCI). The association and a complex interplay of alpha and theta rhythms activity with morpho-structural and perfusional modifications in subjects with prodromal Alzheimer's disease is also discussed.

Alzheimer’s disease affects both patients and their families. Popescu et al. in Chapter 2 discuss the new symptomatic and disease modifying therapies including changes in life style. Many of these therapeutic approaches are directed towards modifying the amyloid cascade, while others aim at tau pathology, inflammation, oxidative stress and neurogenesis The authors also discuss how better management of cardiovascular risk factors, and involvement in social and professional activities can assist in the reduction in the occurrence of Alzheimer’s disease.

Behavioural and psychological symptoms of dementia (BPSD) include agitation and aggressive behaviour. Corbett and Ballard in Chapter 3 highlight the reasons and impacts of BPSD in patients with Alzheimer’s disease. The review provides evidences for the role of both pharmacological and non-pharmacological treatments in the prevention and treatment of BPSD.

The characteristic hallmark of AD is the presence of amyloid plaques in the brain containing aggregates of the neurotoxic amyloid-β peptide Aβ. The BACE1 inhibitor serves as a key drug target in AD. Evin et al. in Chapter 4 comprehensively explain the promises and the possible drawbacks of BACE inhibition strategy and draw attention to the development of BACE inhibitors for AD therapy.

Frontotemporal dementia (FTD) is a collection of disorders caused by progressive cell degeneration in the brain's frontal or temporal lobes. The development of drug therapies for frontotemporal dementia caused by progranulin mutations is extensively reviewed in Chapter 5 by De Muynck and Van Damme. Due to the neurotrophic and anti-inflammatory properties of progranulin, it has shown neuroprotective effects in models of Parkinson’s disease and Alzheimer’s disease. As progranulin has neurotrophic and anti-inflammatory properties, therapeutic interventions that can augment progranulin levels may prove to be useful in other forms of neurodegeneration

This 3rd volume of the book series represents the results of a significant amount of work by many eminent researchers to whom I am grateful. I would also like to express my gratitude to the excellent team of Bentham Science Publishers, especially Ms. Fariya Zulfiqar (Assistant Manager Publication), Mr. Shehzad Naqvi (Senior Manager Publication), led by Mr. Mahmood Alam, (Director Publication), who deserve our appreciation.