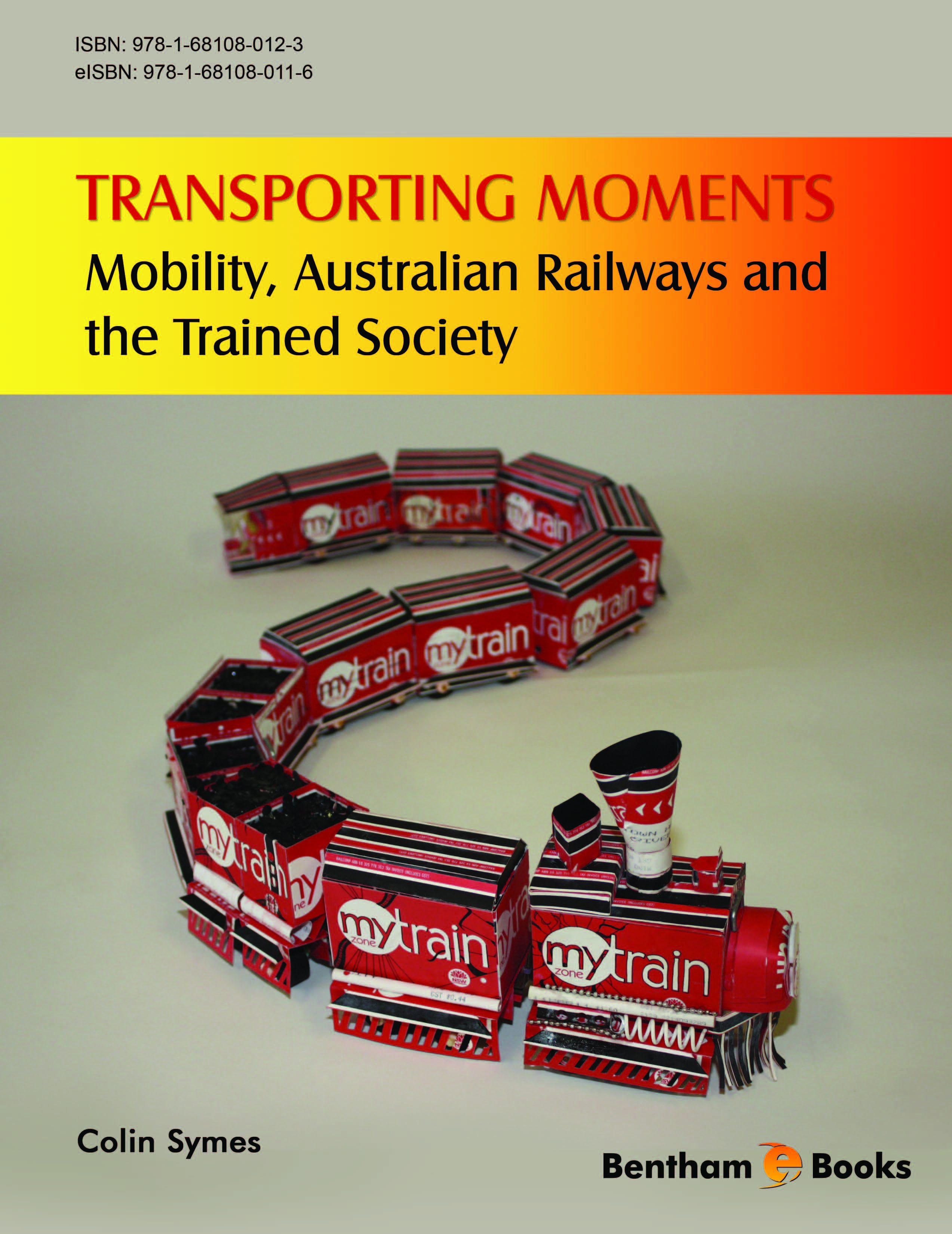 It has been suggested that being on the move entails a complex choreography, comprised of an admixture of passenger comportment, signage, announcements, timetables, maps, notices and posters. Employing insights from mobility theory, Transporting moments provides an account of railway culture from the passenger’s perspective. The book uses the context of commuting in Sydney, at a time when elements of its intra-urban rail network were undergoing a radical upgrade, as its principal case study. This upgrade encompassed its rolling stock, infrastructure and linguistic landscape. Understanding the rationale behind the upgrade requires an understanding of the historical and policy context in which the railways of Sydney and New South Wales, are embedded. This is also the case with Australia’s long distance trains, whose operators have fought hard to stave off competition from airliners and automobiles. Transporting moments, therefore, presents a strong case for preserving public transport as a more equitable and sustainable form of mobility. Transport policy makers across the world can use its insights to justify productive investment in their rail networks and public transportation services in general, and for reducing the global addiction to the automobile.

With its invaluable insights into travelling on trains, Transporting moments is a fascinating addition to the growing corpus of literature on day-to-day mobility.

Books are strange. This one had a prolonged conception and confinement. They commenced with the trains that used to travel behind the flat where my family lived and I spent most of my childhood. With friends, I was brazen enough to run across railway lines and play dare games alongside their precincts, no doubt regularly risking injury and death in the process. I also had a train set that circumnavigated my bedroom, and was a train spotter. These juvenile pursuits laid the foundations of a lifetime fascination with railways-not so much with their engineering as their manifold cultural expressions. My preferred mode of mobility remains rail. I only travel by aeroplane or car, whose iron cages have little appeal, if forced to do so. They are modes of transport, as is clear from the following book’s arguments, about which I have considerable ambivalence. This takes its most tangible expression in the fact that I have never learnt to drive or had any desire to do so. In enabling modern citizens to impress upon their travel itineraries an individuality and particularity that few other modes of travel can emulate, the automobile does so with considerable human and environmental consequences and costs. It has killed, injured and maimed as many people in its history as several minor wars. It is capable of carnage in the real sense of the word. It has ruined, with its voracious hunger for space, the modern city. The world’s most attractive cities, I would argue, are pedestrianised ones, which have banished motorised transport from their streets. In so doing, they have also purged their atmospheres of the toxic gasses emitted by cars and trucks, and thereby removed the many health burdens imposed on their citizenry. In asserting this, I would not want to exonerate rail from its own nefarious impacts on environmental quality and quotidian mobility. It after all fuelled the appetite for speed, which is an indelible and, thus far, ineluctable feature of modern mobility and culture. It impelled the unceasing desire to reach places in a minimum of time, of reducing the temporal dimensions of travel to negligible proportions. In obliterating the spatial dimensions of being mobile it ushered in an age where time counts and which, ironically, almost led to rail’s demise, because of its failure, at least on long distance routes, to keep pace with the celerity of the airliner. Among its other nefarious impacts, was that it ushered in the coal age and set in train the ‘greenhouse’ crisis, and all its associated evils, rising sea levels and escalating air temperatures, which the twenty-first century world wrestles to mitigate-thus far, unsuccessfully. Coal is nature’s way of sequestering carbon dioxide, of preventing it from heating the Earth to extreme levels and thereby facing the same thermal fate as planet Venus. Rail was also instrumental in providing the paradigm for the types of hyper-suburbanisation that motorisation, by adding its own unsustainable dimensions, has exacerbated and compounded.

The aforementioned aspects of motorisation are evident especially in Sydney, my home city whose current transport conundrums and dilemmas, the following book chronicles and analyses. In succumbing to the dictates and imperatives of motorisation, in becoming in other words an ‘autocracy’, one of the most pulchritudinous cities on the planet is now an ugly, unattractive, sprawling conurbation whose current transport’s woes exhibit nightmarish dimensions. Sydney’s once beautiful, garden suburbs, the very ones that rail and light rail (or trams as they were then called) helped facilitate, have been undermined by endless strands of concrete vermicelli, in the shape of freeways and highways. Though there has been a renaissance in inner city living and suburbs that were once enclaves of the working classes have been gentrified, their ‘spirit’ has not been fully recreated. For instance, corner stores, once the magnets of communal life, have not been part of the renaissance. Instead, the new residents of the inner city, by and large members of the creative and knowledge professions, are obliged to shop at mega-shopping complexes, which are only accessible by car.

In arguing against the private car and the individualistic mobility discourses it embodies, I suggest that citizens should if at all costs be discouraged from using a vehicle whose harms so obviously outweighs its benefits. If that entails individuals travelling collectively, socially and in the company of others, at not always convenient times and to places not always as close to a destination as they would desire, so be it. The benefits from more convivial cities (and I am using ‘convivial’ in the meaning that one of the twentieth century most enlightened thinkers Ivan Illich, applied to it) outweigh the relatively minor costs involved. These are that such cities are more concentrated, less distributed, their constituent communities are not set apart and divided by freeways and highways, and are not poisoning their atmospheres and that of the planet. They are just a few of the moral dividends that would flow from a public transport renaissance and from a renaissance of public goods in general. For the same type of philosophical and economic investment should be applied across the board, to facilitate the revival of languishing public hospitals, public schools, public (social) housing and public broadcasting. Now that most Western governments, no more so than Australia’s, have succumbed to questionable, neo-liberalist panaceas and the wanton policy individualism and growth economics flowing from them, this is not a particularly fashionable message. The idea of a socially just society and world, one that is equitable and fair both to people and the planet, is one that can only be attained if extreme individualism is sacrificed for the sake of the greater social and planetary good. This process, which I call ‘republicisation’, need not necessarily entail individuals restricting their individualism, being denied the rights to express freedoms in myriad areas of their lives. However, it might entail trammelling their transport freedoms, options and opportunities, certainly over short and long distances, over those very distances which rail is the most cost-effective, sustainable and containable mode of mobility that has been invented. In exchange, they might gain more freedoms. In reaching that conclusion, I would only add that travelling by rail, particularly in its commuting mode, as the following chapters aim to demonstrate, is far from being humdrum, ennui-ridden and tedious. For the observant and rail-minded, waiting on stations and riding on trains, encountering cohorts of strangers from every corner of the globe, at least for those willing to keep their eyes and ears open and alert, contains as much drama, excitement and interest, as that above and alongside the rails. It is in the hope of infecting that excitement and interest to others, encouraging them to engage with day-to-day travel and to engage in the task of unmasking its sociological and cultural mysteries that this book has been written.