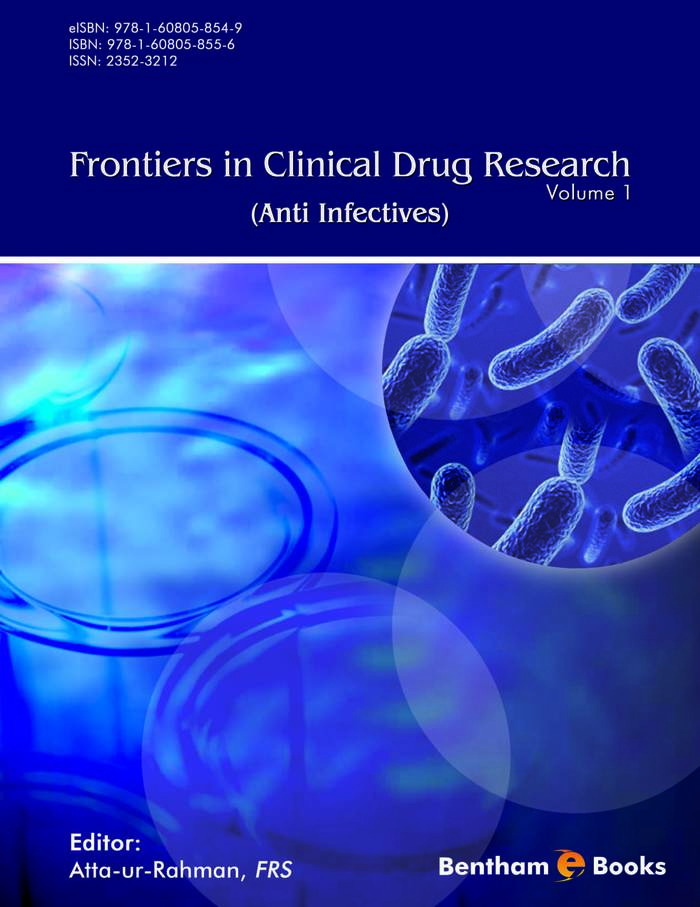 Frontiers in Clinical Drug Research – Anti Infectives is an eBook series that brings updated reviews to readers interested in learning about advances in the development of pharmaceutical agents for the treatment of infectious diseases. The scope of the eBook series covers a range of topics including the medicinal chemistry, pharmacology, molecular biology and biochemistry of natural and synthetic drugs employed in the treatment of infectious diseases. Reviews in this series also include research on multi drug resistance and pre-clinical / clinical findings on novel antibiotics, vaccines, antifungal agents and antitubercular agents. Frontiers in Clinical Drug Research – Anti Infectives is a valuable resource for pharmaceutical scientists and postgraduate students seeking updated and critically important information for developing clinical trials and devising research plans in the field of anti infective drug discovery and epidemiology.

The first volume of this series features reviews that cover a variety of topics including:

The treatment of infectious diseases has come a long way since the pioneering days of Anton von Leeuwenhoek. Significant milestones were made by the discoveries of Pasteur and Kock, followed much later by the discovery of penicillin by Fleming and the development of vaccines by Jenner, Salk, and Sabin. The 20th century saw several progressive strides being taken to fight other infectious organisms, particularly with the development of several pharmaceutical agents to combat them. Anti-infective drug research has, therefore, evolved into a multidisciplinary field which involves the collaboration of medical professionals, microbiologists, pharmaceutical scientists and epidemiologists worldwide.

The first volume of Frontiers in Clinical Drug Research – Anti Infectives brings updated reviews to readers interested in recent advances in the development of pharmaceutical agents for the treatment of infectious diseases. The chapters in this volume of the eBook series are written by leading experts in their respective fields. There are several topics relevant to this field in this introductory volume covering antibiotics, vaccines, drug resistance and more.

In the first chapter of this volume, Brandenburg et al. present their findings on a new class of polypeptide antibiotics against bacterial and viral infections. These researchers have discovered a set of polypeptide compounds which exhibit broad spectrum activity against bacterial pathogenic factors such as lipopolysaccharide and endotoxin. This effort is important in the discovery of novel compounds to target bacterial infections. These infections already pose a serious threat to human health, which is further increased by the incidence of bacterial resistance to existing drugs.

Next, in chapter 2, Kelly and Khardori provide a brief review on antimicrobial agents and highlight new mechanisms of actions that have been discovered in recent years. This chapter briefly covers the history of anti-microbial drug discovery and highlights new drugs including streptogramins, lipoglycopeptides, and fluoroquinolones.

Luo et al. discuss antisense oligonucleotide (ASO) based drugs against bacteria and viruses in chapter 3. This is a comprehensive review which provides a wealth of information on ASO technology, targeted organisms and host factors, and mechanisms of ASO action. The authors have also cited new drugs which are undergoing clinical trials.

In chapter 5, Altindis and coworkers present a summary of the progress made on plants used for edible vaccine research. Edible vaccines can prove to be a novel and economic therapeutic solution to treat infectious diseases.

In Chapter 6, Saini et al., review the recentprogress made in the field of antibiotics against gram negative bacteria. This chapter provides information on antibiotic agents used to fight infections caused by specific bacterial species such as K. pneumoniae, E. coli and H. influenza. They address concerns about MRSA and VRSA strains of S. aureus as well as the requirements of future R&D efforts to develop new drugs.

Chapter 7 is a summary of the current developments against enteric pathogens. Haque and colleagues bring together information on the properties of these pathogens, the antimicrobials currently in use and the mechanisms of drug resistance shown by these bacteria.

Finally, Huang et al. provide an interesting review of the use of bacteriophages against gram positive bacteria over the last 20 years. The authors of this chapter hint at new mechanisms to tackle clinically significant microorganisms including multidrug resistant strains. They demonstrate the bacteriophage therapy is a novel way to address the growing problem of hospital acquired infections.

I hope that readers will find value in this collection of reviews and draw inspiration for conducting further drug discovery research in the field of anti-infective drug research.

I am grateful for the timely efforts made by the editorial personnel, especially Mr. Mahmood Alam (Director Publications), Ms. Maria Baig (Manager Publications) and Mr. Taimur at Bentham Science Publishers for their assistance.