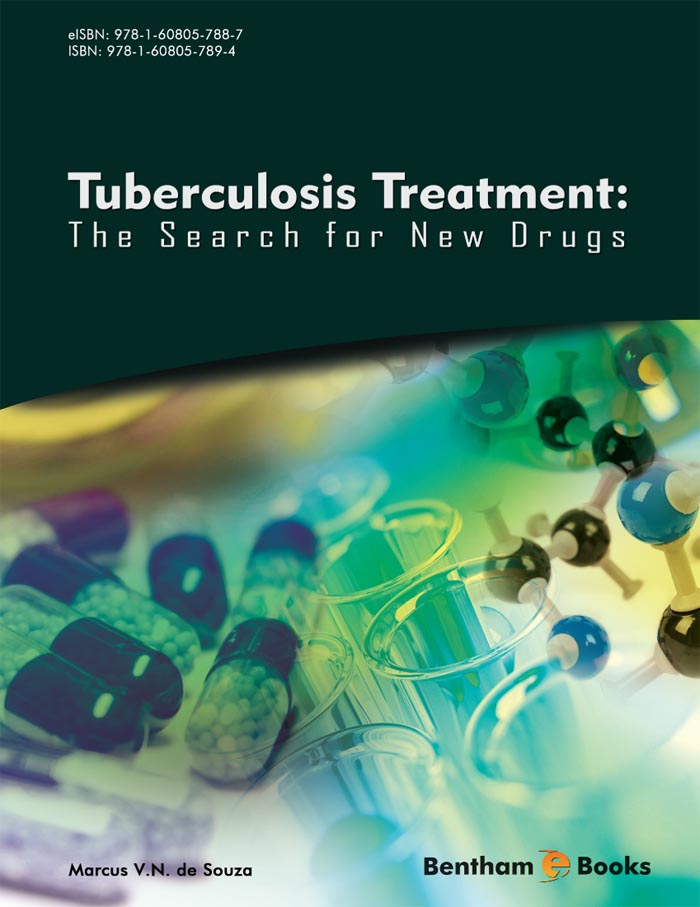 Despite the high impact on human health caused by Tuberculosis (TB) infections worldwide, nearly 45 years have passed since a novel drug was introduced for its treatment. As MDR-TB and XDR-TB cases rise globally new strategies and drugs are desperately needed to address this problem. Tuberculosis Treatment: The Search For New Drugs covers a wide range of topics about TB drug discovery. The e-book begins with historical information about Tuberculosis discovery and treatment and explores modern treatment strategies, formulations (synthetic and natural) and class of compounds. The extraction of important drugs from various sources is also covered in separate chapters along with information about promising drugs undergoing clinical testing. The e-book is a useful reference for readers interested in learning about the array of pharmaceuticals discovered and used to combat Mycobacterium tuberculosis infections.

Tuberculosis (TB) is a chronic bacterial infection, spread through the air, and caused by a bacterium called Mycobacterium tuberculosis. This disease is one of the oldest infectious diseases known by man being present since antiquity and responsible for uncountless deaths. However, in despite of this problem only in twentieth century, the cure and control of tuberculosis were finally found. For example, the first drug used in TB treatment appeared in 1946 with the introduction of the antibiotic streptomycin, 64 years after the discovery of the etiologic agent of tuberculosis, the Mycobacterium tuberculosis by R. Koch in 1882. After that, the period known as the gold era of TB research (1940-70) was responsible for the introduction of synthetic and semisynthetic drugs. Due to these and other achievements, in the 1960s, 1970s and 1980s, the scientific community believed that the disease would be finally eradicated. However, in 1981, a new disease, known as AIDS (Acquired Immune Deficiency Syndrome) was identified, a contagious disease that caused specific damage to the immunological system. This disease is one of the major causes of the resurgence of TB. For example, the deadly combination between TB and HIV has led to a quadrupling of TB cases in several African and Asian countries. In the case of patients with AIDS, TB is the most common opportunistic infection and cause of death, killing 1 in every 3 patients. In addition, patients living with AIDS and contaminated with latent TB are 30 times more likely to develop active TB than no infected patients. There are also different factors which are responsible for the resurgence of TB, such as immigration, war, famine, homelessness, the lack of new drugs and multi-drug-resistant tuberculosis (MDR TB) due to inconsistent or partial treatment. Considering TB problems, the World Health Organization (WHO) declared this disease a global health emergency in 1993. Recently, another important factor in TB treatment worldwide is the advent of XDR (Extensive Drug Resistant or Extreme Drug Resistance), which is commonly defined as strains resistance to all the current first-line drugs, as well as any fluoroquinolone and, at least, to 1 of 3 injectable second-line drugs (capreomycin, kanamycin or amikacin), which like MDR-TB can be transmitted from an infectious patient to other people. In spite of the high impact caused by tuberculosis worldwide nowadays, nearly 45 years have passed since a novel drug was introduced into the market to treat TB, except for rifapentine (1998), a very close analogue of rifampin and more recently bedaquiline, a diarylquinoline approved by FDA for multidrug-resistant tuberculosis in December 2012. Due to the increase of MDR and XDR-TB in the world, we need new strategies and drugs to face this new problem or no available treatment will be distributed. In this context, different kinds of organizations, such as academic institutions, government research laboratories, non-governmental organizations, pharmaceutical industry and contract research houses. Considering that, the purpose of this eBook is describe several aspects of research in TB drug discovery, such synthetic and natural drugs in advanced clinical trials, drugs used in other kind of diseases evaluated against tuberculosis, fixed dose combinations, basic research, promising synthetic class of compounds, natural products from different sources, combinatorial chemistry, and mechanism of action. These subjects are organized on eight chapters, four of them dedicated to TB synthetic drugs and the others four to natural products. Chapter one was devoted to the TB treatment and the development of TB drug discovery, chapters two is described TB drugs candidates that are in advanced clinical trials, the third one is related to drugs already used in other kind of diseases evaluated against tuberculosis. Finally, chapter four highlights synthetic compounds from different chemical classes, which were evaluated against M. tuberculosis in the last fifteen years. Chapters 5-8 were dedicated to TB drug discovery based on natural products separated on natural products on advanced clinical trials, plants, fungus and marine natural products, respectively. I hope that this eBook will provide a contribution for researcher in industry and universities working in medicinal chemistry, drug discovery, biochemistry, pharmacology, and biology area who are involving in the fight against this disease.

I would like to thank very much all the people that supported and contributed to making this eBook a reality. Several people read and reread the manuscript giving important contributions in different aspects improving the text and the quality of this eBook. A special thanks for my students Adriana Ferreira Faria, Alessandra Campbell Pinheiro, Camilo Henrique da Silva Lima, Karla Ceodaro Paes, Cristiane França, Laura Nogueira de Faria Cardoso, Marcelle de Lima Ferreira Bispo, Marcele Moreth, Pedro Santos Mello de Oliveira, Raoni Schroeder Borges Gonçalves, Silvia Helena Cardoso and Thaís Cristina Mendonça Nogueira for they outsdanding work in TB field and help in several aspects of the research. I would like also to thank the professors Adilson D. da Silva, James Lewis and Solange M.S.V. Wardell, Marcone A. L. de Oliveira, Maria C. da S. Lourenço, Mauro V. de Almeida, Robert H. Dood, Thatyana R. A. Vasconcelos and Wilson J. C. Filho for their collaboration, support and encouragement during the entire process. I appreciated very much the opportunity that professor Clifton E. Barry III gave to me to work in his TB research laboratory at National Health Institute (NIH) I learned a lot from him. Thanks also for his team and Helena Boshoff for the very good moments and scientific discussions.

The author(s) confirm that this eBook content has no conflict of interest.