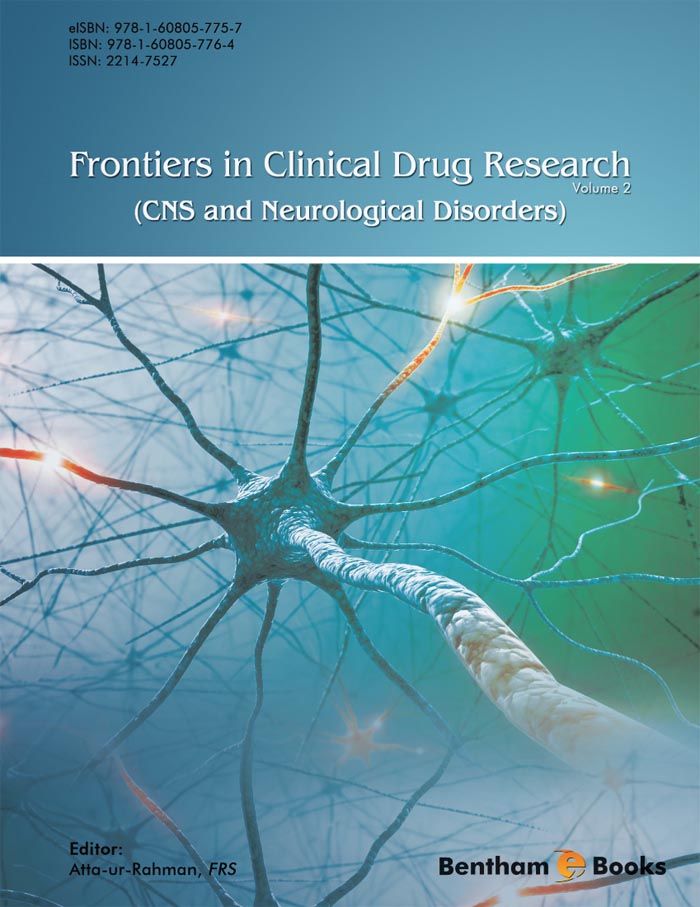 The second volume of this series features eight chapters that cover a variety of topics including:

-Treatment of multiple sclerosis and schizophrenia

-Relationship between neurological diseases and cancer

Frontiers in Clinical Drug Research - CNS and Neurological Disorders presents recent advances in the development of pharmaceutical agents for the treatment of central nervous system (CNS) and other nerve disorders. It covers a range of topics including the medicinal chemistry, pharmacology, molecular biology and biochemistry of contemporary molecular targets involved in neurological and CNS disorders. The chapters are written by authorities in the field and are mainly focused on clinical and therapeutic aspects of novel drugs intended for these targets.

The book is a valuable resource for pharmaceutical scientists and postgraduate students seeking updated and critically important information for devising research plans in the field of neurology. The contributions by leading researchers in the field shed light on a variety of therapeutic areas such as the treatment of multiple sclerosis and schizophrenia, neurochemistry of tremors, relationship between GABA and Alzheimer’s disease therapy as well as between neurological diseases and cancer, and recent researches on angiogenesis-related blindness.

In chapter 1, Jaime Almeida and Christian Bouwkamp present the drugs presently under development for schizophrenia, from the earlier stages of development to phase III clinical trials. They discuss the most promising strategies and targets currently under investigation for the development of novel schizophrenia drugs. In chapter 2, Mauricio O. Nava-Mesa et al. have highlighted the role of GABAergic synapses towards the therapy of Alzheimer´s disease (AD). Alzheimer´s disease is characterized by the deposition of amyloid-ß peptide (Aß) and microtubule-binding protein tau which forms Amyloid plaques and neurofibrillary tangles. These Aß plaques are pivotal targets for drug design studies to improve dysfunctions that become prevalent with age. The hippocampus, septum, amygdala or entorhinal cortex in the brain have rich reciprocal glutamatergic, cholinergic and GABAergic connections. The relationships among them directly affect learning and memory processes. These aspects are discussed.

Mickael Bonnan and Philippe Cabre have focused on the new indication of PLEX in the full spectrum of demyelinating disorders of central nervous system in chapter 3. They have briefly reviewed the spectrum of disorders (MS, NMO, ADEM, Balo) and demonstrated how the humoral part of inflammation, according to the underlying disease, is especially suitable to be eliminated by plasma exchange. In chapter 4, Hortensia Alonso-Navarro et al. discuss the pharmacological treatments that have demonstrated the greatest efficacy for essential tremor. These are the beta-blockers propranolol and primidone. They have also described the alterations of the dopaminergic, serotonergic, GABAergic, noradrenergic and adrenergic systems.

Soheila Raysi Dehcordi et al. in chapter 5 report the experiences of the authors in using neurophysiopathological monitoring during aneurysm surgery with particular reference to the evoked potential and EEG changes in response to surgical and anaesthetic variables; In chapter 6, Rosella Ciurleo et al. have discussed the different types of multiple sclerosis and the therapies that are under development. In the next chapter Seung-Shick Shin et al. present the implications of glutamatergic signaling through glutamate receptors and transporters in cancers in comparison to neuronal disorders as well as recent clinical approaches using Riluzole, an FDA approved glutamate release inhibitor for ALS patients in human cancers. In the last chapter Dong Hyun Jo et al. evaluate the treatment options for diabetic retinopathy (DR).

I hope that the readers will find these reviews valuable and thought provoking so that they may trigger further research in the quest for the development of pharmacological agents used for the treatment of neurological disorders.

I am grateful for the timely efforts made by the editorial personnel, especially Mr. Mahmood Alam (Director Publications), and Mr. Shehzad Naqvi (Senior Manager Publications), at Bentham Science Publishers.