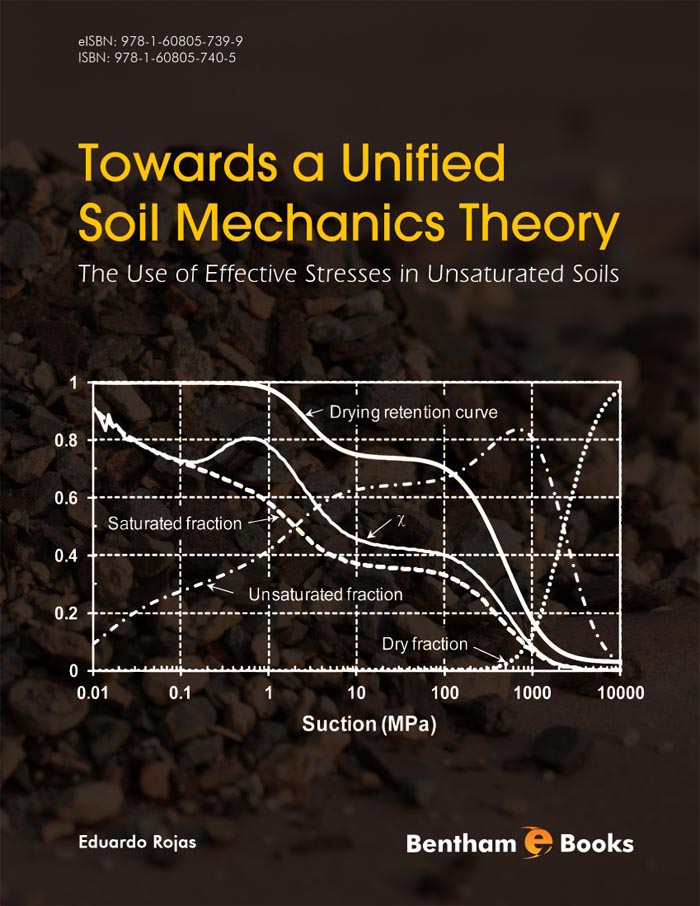 Towards a Unified Soil Mechanics Theory: The Use of Effective Stresses in Unsaturated Soils

In this book, an analytical equation for the effective stress for unsaturated soils is established. This equation requires the knowledge of the superficial area of solids affected by the capillary phenomenon. In other words, we need to know how water distributes in the pores of the soil. This distribution can be modeled using a solid-porous model built on a regular network. However the size of the network required to correctly simulate the structure of a small soil sample cannot be managed with a common PC. For that reason, a probabilistic porous-solid model is developed. This model uses the pore size distribution in the form of a probabilistic function which in addition to the Laplace equation and the principle of continuity can be expressed as the probability of a pore of certain size to be filled or dry at suction during a wetting or drying path, respectively. In this way, the soil-water retention curves can be simulated and the effective stress at any suction during wetting or drying processes can be determined. Based on this approach, it is shown that unsaturated soils behave under the same principles for strength and volumetric behavior as saturated soils.

Towards A Unified Soil Mechanics Theory paves the way for a universal theory of soil mechanics. The volume will be a valuable reference to civil engineers, earth scientists and hydrologists interested in soil mechanics at both academic and professional levels.

Things went not so smooth for unsaturated materials. More than fifty years ago, Alan W. Bishop proposed an equation for the effective stresses of unsaturated soils. However, this equation was severely criticized because it could not explain by itself the phenomenon of collapse upon wetting of soils. In addition Bishop’s effective stress parameter x showed to be extremely elusive and difficult to be determined experimentally. Given these difficulties the use of the so called independent stress variables (mainly net stress and suction) became common in unsaturated soil mechanics.

Different equations for the strength and volumetric behavior of soils were proposed and the theory for unsaturated soils became distant from that of saturated materials. The Barcelona Basic Model represents one of the most simple and completes models within this trend. The Barcelona Basic Model enhanced the Critical State theory to include unsaturated materials and give a plausible explanation to the phenomenon of collapse upon wetting. This model proved that this phenomenon could only be modeled if in addition to a volumetric equation, a proper elastoplastic framework was included. But then, the simulation of some particular phenomena related to the strength and volumetric behavior of unsaturated soils, appeal for the inclusion of the hysteresis of the soil-water retention curve and the hydro-mechanical coupling observed in unsaturated materials. The difficulties met in introducing these aspects into the independent stress variables models made it clear that a different approach should be considered. Then, quietly elastoplastic models based on Bishop’s effective stress equation started to appear showing its superiority by including the hysteresis of the soil-water retention curve and the hydromechanical coupling of unsaturated soils. And finally, the debate about the appropriateness of Bishop’s equation to represent the effective stresses for unsaturated soils is slowly coming to an end. This transformation on the construction of constitutive models for unsaturated soils is also leading towards a unified soil mechanics theory.

This eBook shows how the effective stress principle can be applied to simulate the strength and volumetric behavior of unsaturated soils employing the same equations commonly used for saturated materials. The eBook initiates with an analysis of the stresses transmitted to the different phases of an unsaturated soil when it is loaded. This analysis results in an expression for the stresses carried by the solid skeleton of the material. This expression can be written in the same terms as Bishop´s effective stress equation and leads to an analytical expression for Bishop’s effective stress parameter x. However, the variables required to obtain x cannot be experimentally determined. For that purpose, a network porous-solid model is developed able to approximately reproduce the structure of soils based on the grain and pore size distributions of the material. This porous-solid model is able to determine the allocation of water in the pores of the soil and thus simulate the soil-water retention curves of the material including the scanning curves. It is also possible to obtain the required parameters to determine the value of Bishop’s parameter x and therefore compute the current effective stress. Nevertheless, the use of a network solid-porous model requires large memory storage capacity that cannot be presently found in common computers and thus the solid-porous model computer program becomes very slow. For that reason, a probabilistic solid-porous model is developed that reduces the storage requirements and speeds the simulations. Finally an elastoplastic framework is developed to account for the volumetric behavior of unsaturated soils including compacted materials. This framework allows the simulation of the collapse upon wetting phenomenon and explains some other phenomena that could not be explained using the independent stress variables approach. All these developments lead to a general framework for the strength and volumetric behavior of soils including saturated, unsaturated and compacted materials. In that sense, a unified soil mechanics theory is presently on its way.

All graphic material contained in this eBook was carefully prepared by María de la Luz Pérez-Rea and Hiram Arroyo Contreras, Researcher and PhD student at the School of Engineering of the University of Querétaro, Mexico, respectively. Their help is greatly appreciated.

The author confirms that the eBook content has no conflict of interest.