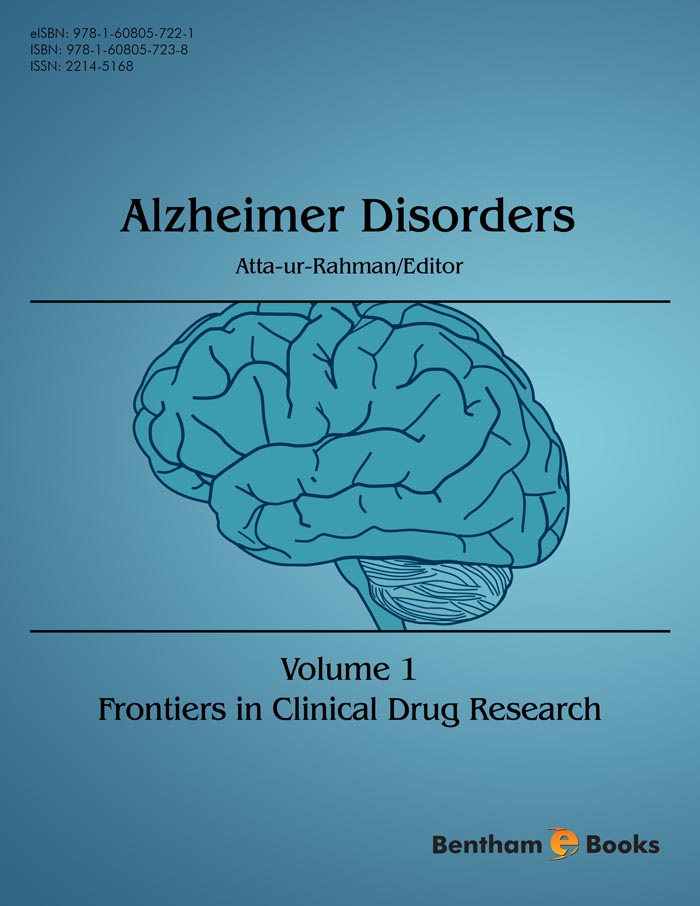 Alzheimer's disease (AD) is a disease that causes dementia, or loss of brain function. It affects the parts of the brain that deal with memory, thought, and language. The brain of a person with Alzheimer's contains abnormal clumps of cellular debris and protein (plaques) and collapsed microtubules (support structures of the cell).

The chapters in this volume are written by leading authors in their respective fields. There are several AD related topics in this introductory volume covering immunotherapy, AD diagnosis, symptomatic AD pathogenesis along with neurodegenerative effects, AD drug development models and therapy, and age related effects leading to AD.

In the first chapter of the eBook, Katharina Schindowski Zimmerman reviews the immunological basis for the mechanism of action of passive Aβ immunotherapy, anti-Aβ mAbs and scaffolds. In the next chapter, Wright and Harding review the approach of employing multi-target-directed ligands (MTDL) in the development of drugs to treat AD. The authors of this review demonstrate that there is a paradigm shift in drug screening, away from single lead-target models, and it could be potentially useful in treating AD. Chapter 3, written by Cavallaro and Fuso, summarizes current drugs used in AD therapy and new developments in therapeutic interventions in clinical phases. In the subsequent chapter Yohsiyama reviews the progress in tau-directed therapies. This work is significant from the standpoint of current clinical trials of therapies focusing on restricting beta –amyloid (Aβ) production in order to reduce Aβ pathogenesis and neurodegeneration in patients suffering from symptomatic AD. Asija provides a comprehensive insight into the different, currently available, approaches in the treatment of AD in chapter 5. The review presents findings of ongoing clinical trials and drug research studies in advanced stages of development and their application in the prevention and treatment of AD.

Physical activity and exercise is thought to play a positive role in improving the quality of life among patients suffering from brain disorders. Chapter 6 by Eef Hogervorst et al. takes on this perspective. The authors discuss factors that may influence the relationship between physical activity and cognitive functioning with the implications in theory theory and practice. Zheng et al. elaborate on some examples of neurogenic molecules which can reduce amyloid beta (Aβ) production, prevent oxidative stress and tau hyperphosphorylation, and restore metal dyshomeostasis while demonstrating neuroprotective/neurorestorative effects. These include ladostigil and rasiline.

The subsequent chapter addresses sleep apnea in the elderly and its role in hypoxia, hypoxemia, cerebral hypoperfusion and compromised blood supply, brain hypometabolism in aging and AD. Epidemiological data is employed in this study and the review points to an ever increasing need for researchers to address sleep disorders as the cost of healthcare for AD patients is rising. Chapter 9 of the eBook deals with various natural and synthetic drug therapies and also presents rational guidelines for the prevention of AD. Jellinger presents a timely review on the diagnosis of Alzheimer subtypes – dementias. Morphological dementia is incurable at present, but Jelinger proposes a revision of current diagnostic protocols and frameworks as a basis for early diagnosis and efficient new therapy options against dementias.

In the last chapter of this eBook, the role of various trace metals as cofactors of a poor cognitive function and of an increased risk of dementia leading to AD is reviewed. In particular, this study is a critical analysis of the role played by copper, iron, zinc and aluminum in neurodegeneration.

I hope that readers will find value in these reviews and draw inspiration for conducting further research in the quest for a cure for Alzheimer’s disease and related disorders.

The discovery of new EPO actions beyond the hematopoietic system opened a new field of investigation with these agents. Several molecules have been developed to present the protective action, without the activation of the hematopoietic system. These agents can be potentially used in several diseases of the brain/central and peripheral nervous system, eye, heart and kidney.

This volume of “Frontiers in Drug Discovery” starts with the revision of erythropoiesis (chapter 1), EPO gene regulation (chapter 2), microRNAs and potential contribution to the development of new therapeutic strategies (chapter 3), animal models for studding kidney disease-associated anemia (chapter 4) and risk and benefits of ESA therapy (chapter 5 and 6). In chapter 7 and 8, the biological effects of the new erythropoietic stimulating agents, heparin-binding erythropoietin and of pHBSP, were presented. The remaining chapters of this book show some of the potential applications of erythropoietic stimulating agents.