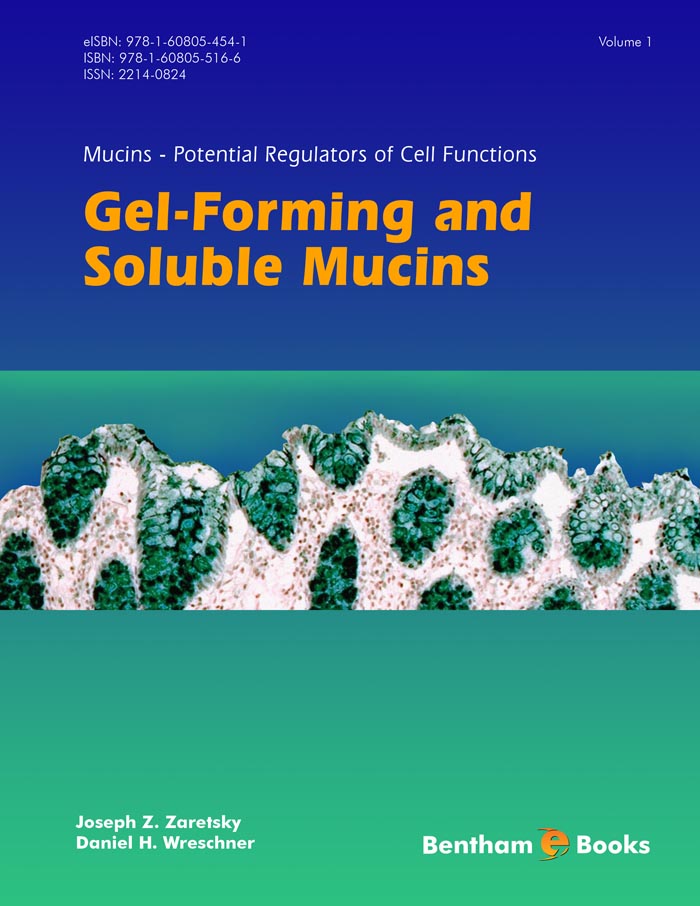 Mucins are glycoproteins that are expressed in cells of different types and fulfill multiple functions that determine participation of these proteins in such processes as signal transduction, regulation of gene expression, cell proliferation, embryogenesis, cell differentiation, immunity, apoptosis and cancer development. This E-book series on mucins presents critical reviews on modern data concerning structures and functions of mucins, their roles in cell physiology and pathology as well as molecular aspects of therapy of mucin-associated diseases. Mucins are represented by two types of molecules: secreted mucins and membrane-bound (receptor) mucins. This e-book series represents a unique attempt to describe the molecular nature of mucin multifunctionality in separate volumes. Chapters in each volume demonstrate the central role of mucins as connectors and regulators of different signaling pathways and their participation metastatic processes. Clinical aspects of mucins, such as their role as diagnostic markers as well as possible applications in mucin-based immuno- and gene-therapies are also discussed.

This is the first volume of the series. This volume introduces readers to the general properties of mucins, followed by chapters on specific variants of gel-forming and soluble mucins. The volume concludes with information on the functions of secreted mucins.

Mucus is a viscous colloid gel developed in the course of evolution by live systems as one of the major instruments of cell defense. Mucus protects cells from mechanical and chemical stresses, hydrates cells and organisms, lubricates epithelial surfaces, and enables exchange of water, chemicals, metabolites, nutrients, gases, odorants, hormones and gametes. It has the ability to trap and immobilize pathogens and small particles before they come into contact with epithelial surfaces. These important functions are determined by the properties of specific glycoproteins known as mucins.

The term “mucin” was coined for large multifunctional glycoproteins that are secreted by epithelial cells into extracellular space and have specific structural domains that perform specific functions. This group of mucin glycoproteins is called “secreted mucins” in contrast to non-secreted “membrane-bound mucins”. Research in the past several years has shown that secreted mucins are polyvalent proteins involved in multiple cell processes, with active roles in maintenance of homeostasis under physiological conditions and development of disease under pathological conditions.

The past three decades have witnessed the rapid development of a new area of science called mucinology – the study of the properties and functions of mucins. The rapid advances in this field are reflected by the number of articles published on the subject at various times in the past 30 years: 180 papers from 1980 to 1982, some 700 from 1989 to 1990, and more than 2200 articles between 2010 and 2011. The latest monograph on mucins appeared in 2008, and already the field has burgeoned with a wealth of new data waiting to be analyzed and integrated. This book is meant to meet this need. A total of 21 mucin genes have been cloned and sequenced and their polypeptide products studied to varying extents. The secreted mucins are encoded by 8 of these genes and 13 other encode the membrane-bound mucins. The secreted mucins are the subject of this book: five are gel-forming (MUC2, MUC5AC, MUC5B, MUC6 and MUC19) and three are soluble (MUC7, MUC8 and MUC9).

As follows from the title of the book, the properties and functions of the gel-forming and soluble mucins and the corresponding genes attest to their multifunctional character. Functions that have been discovered and documented to date, so called overt functions, are described in detail. Another whole set of potential functions, the covert functions, hinted at by indirect evidence, mainly bioinformatics data, and await experimental verification. They too are addressed.

The 13 chapters of the book are collected into four parts. The first part (Chapters 1-3) presents the general characteristics of mucins and mucin classification (Chapter 1), a comparison of secreted and membrane-bound mucin properties (Chapter 2), and the structural and evolutionary aspects of the secreted mucins (Chapter 3). The second part (Chapters 4-8) presents detailed information about the structure, and the biochemical, biophysical and genetic properties of the gel-forming mucins and the corresponding genes, including their promoters and regulatory mechanisms: MUC2 (Chapter 4), MUC5AC (Chapter 5), MUC5B (Chapter 6), MUC6 (Chapter 7) and MUC19 (Chapter 8). Also described is the expression of these genes at transcriptome and proteome levels under physiological conditions, including embryonic and fetal development, and in pathology. The third part of the book (Chapters 9-11) covers the properties and expression of genes encoding the soluble mucins MUC7 (Chapter 9), MUC8 (Chapter 10) and MUC9 (Chapter 11), including the structure and biochemical properties of individual glycoproteins comprising this group of mucins. In the fourth part, the overt and covert functions of the gel-forming and soluble mucins are analyzed. Chapter 12 contains information about experimentally-proven mucin functions and the involvement of the secreted mucins in the fundamental processes of cell physiology and pathology, including oncogenesis. Chapter 13 summarizes bioinformatics data that point to the potential of the secreted mucin glycoproteins to interact with various protein partners and thereby contribute to the regulation of cell functions.

The authors have declared that no competing interests associated with this work exist.