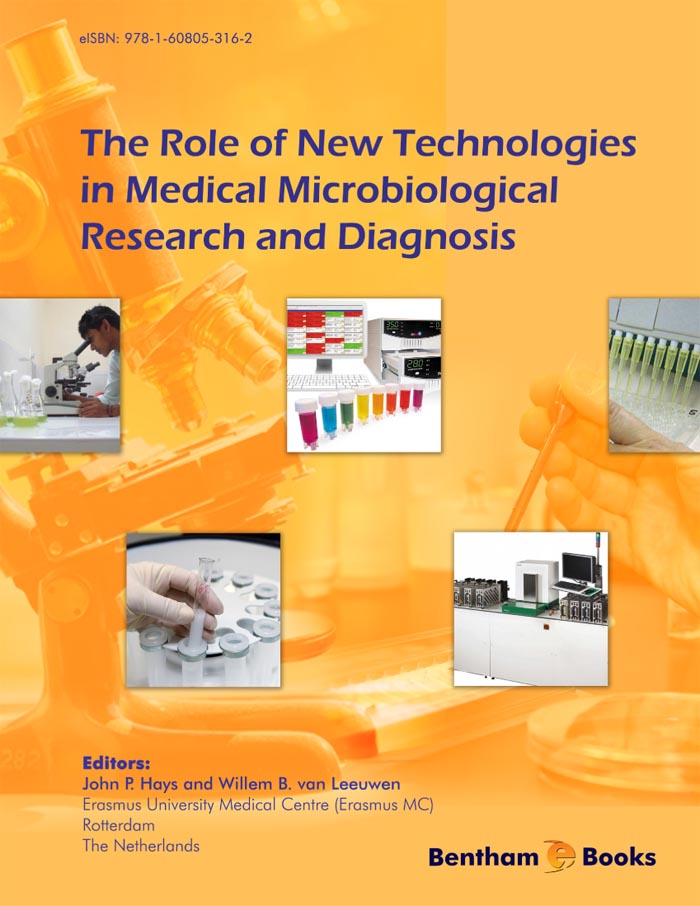 The Role of New Technologies in Medical Microbiological Research and Diagnosis

This e-book provides a comprehensive overview of state of the art applications of biomolecular techniques that are currently used, or are in development in the field of microbiological diagnostics research. In this respect, the topics covered include, genomics, proteomics, immunologics, biosensors, microarrays and nano-culture technologies. The broad range of techniques covered by the book will be invaluable to readers from professions allied to (but not exclusive to) microbiology analysts and researchers, laboratory technicians, (medical) microbiologists, molecular biologists, analytical physicists, and physicians.

In this e-book 'primer' the editors have attempted to provide the reader with an overview of some of the most important 'new technologies' that are currently being developed, evaluated and validated for use in medical microbiological diagnosis and research laboratories throughout the world. Though the definition of ‘new’ is open to interpretation, and several of these ‘new technologies’ have already found a niche within (medical) microbiological research and diagnostic laboratories, the true potential of these technologies have yet to be realised, and it may yet be some time before any of the new technologies described in this e-book become firmly established within the majority of global microbiological research and diagnostic laboratories.

The choice of new technologies possessing the potential to replace (or at least augment) traditional “gold standard” culture and serological methods in microbiological research and diagnostic laboratories is surprisingly large, with most of these new technologies having been developed into commercially viable options within the previous 10 years. Bearing this in mind, the authors have attempted to include in this e-book primer, a broad range of chapters describing innovative new technologies that are being/have been developed within several different fields of scientific research. These fields include nano-culture, nucleic acid amplification and detection (genomics), protein-based detection (proteomics), growth and metabolism (metabolomics), and immunological / serological markers. Further, the authors of each chapter have included descriptions of how their technology is being/may be used in both theory and practice within medical microbiological diagnosis and research, including relevant lists of references.

In Chapter 1, Ingham and Schneeberger discuss a new technology that take the traditional approach to microbiological research and diagnosis (with its emphasis on the selective culture to obtain pure microbial colonies) a step further. They describe the advantages associated with new nanoporous materials (especially porous aluminium oxide or PAO), and their use in the development of highly subdivided microbial culture chips, with up to a million separate, miniaturized growth areas.

Chapters 2 and 3 describe new technologies associated with proteins and proteomics and their use in medical microbiological diagnostics. In Chapter 2, Hwang et al., describe recent advances in peptide-based probes and biosensor technology, including methods associated with mass perturbance, electrical perturbance, and optical methods. Special emphasis is placed on the possible impact of peptide-based biosensors in pandemic disease surveillance. Martin Welker in Chapter 3 explains the technique of Matrix Assisted Laser Desorption/Ionization Time-of-Flight Mass Spectrometry (MALDI-TOF MS) and its potential application in rapidly identifying microorganisms and cellular components, including the advantages and disadvantages of this new technology in microbial identification and taxonomy.

The field of metabolomics and metabolomic-related technology is described in Chapters 4 and 5, Guazzaroni et al., provide a general overview of the techniques, problems and prospects encountered in the analysis of small metabolite compounds. One of their objectives is to provide the reader with information on how (meta-) metabolomic fingerprinting studies can be used to assess microbial community and microbe-host interactions. In a similar manner, Bruins et al., provide a brief overview of the problems and recent technological developments associated with the development of 'electronic nose' technology, with particular emphasis on their own company’s technology. Their embryonic electronic nose technology monitors the production of volatile metabolic molecules during bacterial growth.

The use of nanoparticles in medical microbiological research and diagnosis is described in Chapter 6, where Ikonomopoulis et al., explain the possible uses of nanoparticles (conjugated to oligonucleotide, antibodies and peptides) in identifying the genetic or immunogenic footprint of pathogens. Manmohan et al. in Chapter 7, describe the potential use of a novel DNA nucleic acid amplification system (Loop Mediated Isothermal Amplification or LAMP) as a tool that offers rapid, accurate, and cost-effective diagnosis for infectious diseases. This technology has already been developed into several commercial kits, but the full potential of this technology has yet to be realised.

In chapter 8, Nuutila describes recent research investigating the use of flow cytometric quantitative analysis in the detection of new specific and sensitive phagocytic cell surface markers. He shows how these findings may be incorporated into novel algorithms in order to rapidly determine the presence/absence of bacterial or viral infections in hospitalised patients. In Chapter 9, Verkaik et al., provide a brief description of the Luminex bead-based flow cytometry technique, which allows the simultaneous quantification of multiple antibodies antigens (or oligonucleotide) in a single sample. They include an example of how this technology is being used to determine the importance of IgG immunoglobulin levels in Staphylococcus aureus colonisation.

Finally, the editors predict that advances in at least some of the 'new technologies' described in this ebook 'primer', will eventually be developed into successful 'point-of-care' or 'near-patient' testing technologies, not least due to concomitant advances currently being made in 'accessory' technological fields such as microfluidics, microengineering, photonics, increased signal detection sensitivity, and the miniaturization of essential components. The development and application of point-of-care / near-patient testing in the context of medical microbiological diagnosis (and to a lesser extent medical microbiological research), will provide immediate benefits both for the patient and the attending physician, allowing more rapid and better informed diagnoses and treatment schemes to be made. The net effect will be; i) to provide a better health service for patients, ii) to better understand disease epidemiology and the infection process, iii) to help reduce health-care costs, and iv) to limit the development and spread of infectious disease and antimicrobial resistance.

One thing is certain, research into 'new technologies' in medical microbiological research and diagnosis is continuing, financed by all types of business, including large industrial concerns, small / medium enterprises and university campuses, all of whom are working to push back the boundaries of our current scientific knowledge and technological innovation. This means that the 'next generation of new technologies' in the field of medical microbiological research and diagnosis promise to generate even greater benefits for physicians, patients and society as a whole .