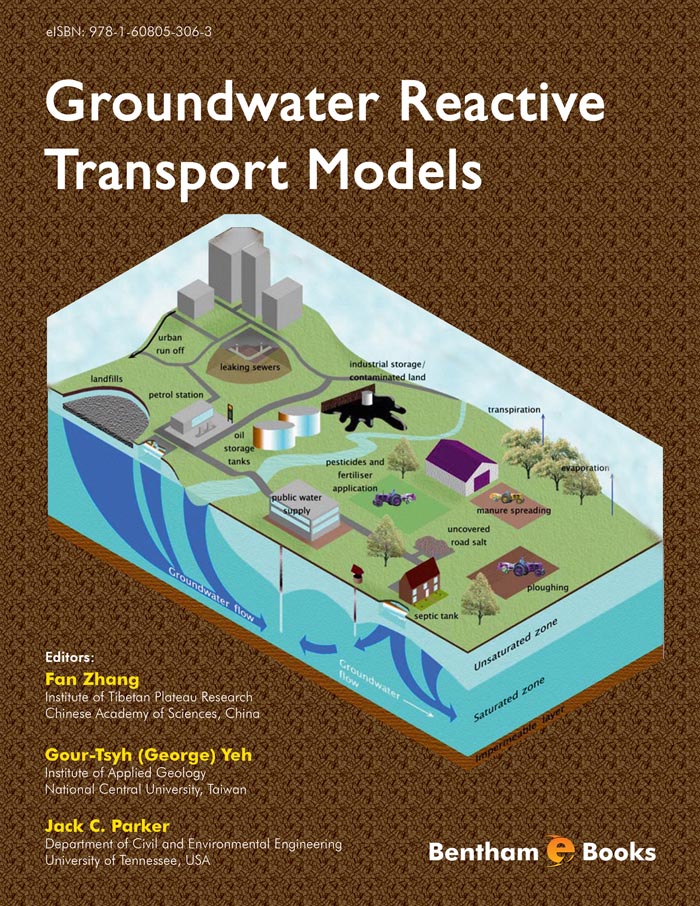 Groundwater has always played an important role in human history. Groundwater contamination has been a subject of intensive investigations since the mid-1980s. Contaminants in water environments undergo transformations and changes in concentration resulting from physical, chemical, and/or biological processes. A capability to understand and model these processes is at the core of water-quality management. It has long been appreciated that numerical models can enhance fundamental understanding of coupled physical and biogeochemical processes in geologic media as well as enable quantification of performance and risk assessment for engineering applications. Consideration of equilibrium and kinetic chemistry, thermal transport, and hydrologic transport and interactions between fluid flow, heat flow, and reactive transport is necessary to represent the complexity of real systems.

Reactive transport models have become essential tools to support investigations of the fate of chemicals in both pristine and contaminated hydrogeologic systems, to facilitate the testing of hypotheses and conceptual models, and to quantify the analysis of complex and non-linear interactions of migrating chemicals in laboratory experiments and field investigations. Groundwater reactive transport models are useful to assess and quantify contaminant precipitation, sorption and migration in subsurface media and to evaluate natural attenuation and alternative remediation strategies. Reactive transport phenomena in porous media have been studied in such diverse fields as chemistry, physics, engineering and geology. Simulations of reactive transport have been widely used in petroleum engineering, groundwater hydrology, environmental engineering and chemical engineering.

Many groundwater reactive transport models are available today which consider various complexities and exhibit various strengths and weaknesses. Selecting the most appropriate model to achieve the most accurate, efficient and economical solution possible is a challenging task. It is extremely important to know the models well to make the best choices. Comprehensive documentation of models and extensive education and training are critical. For this reason, numerical modeling of subsurface flow and reactive transport has attracted considerable attention and a variety of numerical techniques and computational tools have been proposed and developed, especially as computer power and processing capabilities have significantly increased in the past decades. Significant mathematical and computational challenges are posed by problems involving realistic representation of convection, diffusion, dispersion and chemical reactions. The development of mechanistically-based reactive chemical transport models has accelerated in the last two decades.

The groundwater reactive transport models introduced in this book have mostly been developed over decades, represent the state-of-the-art in subsurface flow and reactive transport modeling tools, and been widely used for numerical modeling of subsurface flow and reactive transport processes. Coupled modeling of subsurface multiphase fluid and heat flow, solute transport, and chemical reactions can be applied to many geologic systems and environmental problems, including geothermal systems, diagenetic and weathering processes, geological disposal of nuclear waste, CO2 geological sequestration and storage, acid mine drainage remediation, contaminant transport, groundwater monitoring and remediation, and even energy related problems like in-situ production of oil shale, etc. Numerous examples have been introduced in this book to facilitate the transition from theory to field applications, which may use both United States Customary units and SI (Système international d'unités) units.

Chapter 2 describes a number of efficient and locally conservative methods for subsurface flow and reactive transport that have been or are currently being implemented in the IPARS (Integrated Parallel and Accurate Reservoir Simulator). For flow problems, discontinuous Galerkin (DG) methods and mortar mixed finite element methods are considered. For transport problems, discontinuous Galerkin methods and Godunov-mixed methods are employed. For efficient treatment of reactive transport simulations, a number of state-of-the-art dynamic mesh adaptation strategies and implementations are presented. Operator splitting approaches and iterative coupling techniques are also discussed.

Chapter 3 focuses on TOUGHREACT, a program for chemically reactive non-isothermal flows of multiphase fluids in porous and fractured media. The program was written in Fortran 77 and developed by introducing reactive chemistry into the multiphase fluid and heat flow simulator TOUGH2. A variety of subsurface thermo-physical-chemical-biological processes are considered under a wide range of conditions of pressure, temperature, water saturation, ionic strength, and pH and Eh. Reactions among aqueous species and interactions between mineral assemblages and fluids can occur under local equilibrium or via kinetically controlled rates. The gas phase can be chemically active. Precipitation and dissolution reactions can change formation porosity and permeability. Intra-aqueous kinetics, biodegradation and surface complexation have recently been incorporated.

Chapter 6 discusses PFLOTRAN, a next-generation reactive flow and transport code for modeling subsurface processes, which has been designed from the ground up to run efficiently on machines ranging from leadership-class supercomputers to laptops. Based on an object-oriented design, the code is easily extensible to incorporate additional processes. It can interface seamlessly with Fortran 9X, C and C++ codes. Features of the code include a modular input file, implementation of high-performance I/O using parallel HDF5, ability to perform multiple realization simulations with multiple processors per realization in a seamless manner, and multiple modes for multiphase flow and multicomponent geochemical transport. Chemical reactions currently implemented in the code include homogeneous aqueous complexing reactions and heterogeneous mineral precipitation/dissolution, ion exchange, surface complexation and a multirate kinetic sorption model.

Chapter 8 explains MIN3P, a general purpose multicomponent reactive transport code for variably saturated media. The basic version of the code includes Richard’s equation for the solution of variablysaturated flow, and solves mass balance equations for advective-diffusive solute transport and diffusive gas transport. Biogeochemical reactions are described by a partial equilibrium approach, using equilibriumbased law-of-mass-action relationships for fast reactions, and a generalized kinetic framework for reactions that are relatively slow in comparison to the transport time scale. The model formulation is based on the global implicit method (GIM) with direct substitution of the biogeochemical relationships into the transport equations. The capabilities of the basic code and three follow-up developments are demonstrated by several application examples.

Chapter 9 provides a general overview of NUFT code, which is a highly flexible computer software package for modeling multiphase, multi-component heat and mass flow and reactive transport in unsaturated and saturated porous media. An integrated finite difference method is used for numerical discretization. Several mathematical models are implemented in order to address various flow and reactive transport processes in porous media. The governing equations for each sub-model are solved by implicit time-integration. In particular a globally implicit approach is employed to solve transport and reaction equations simultaneously. The code is designed based on object-oriented principles, and equipped with efficient solvers and massively parallel computation capability.

This book would not exist without the contribution of all the chapter authors. We are grateful to these contributors. Furthermore, we would like to express our gratitude to Dr. Xiaonan Shi for editorial assistance.