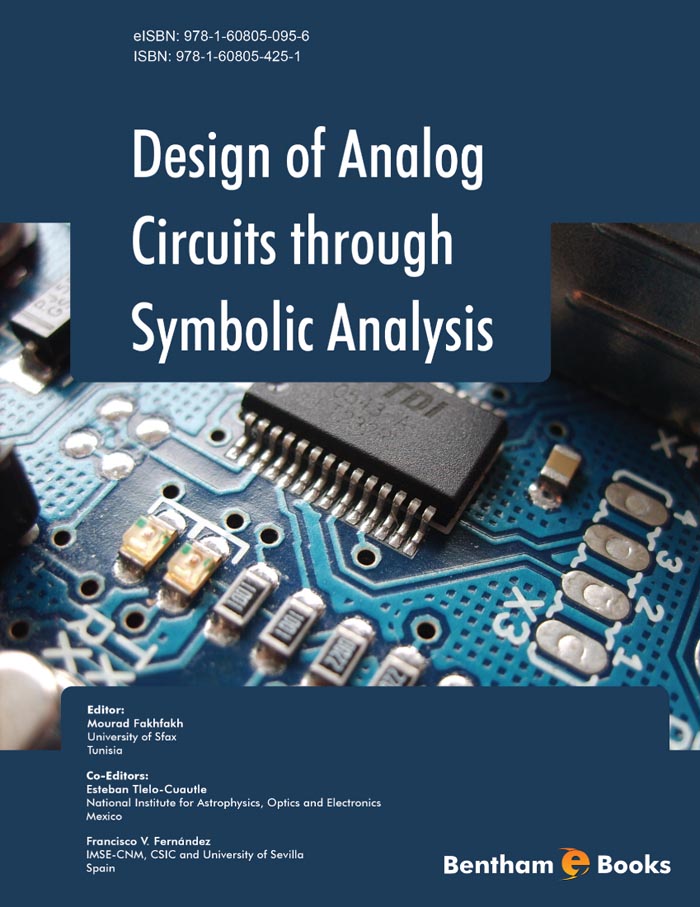 Symbolic analyzers have the potential to offer knowledge to sophomores as well as practitioners of analog circuit design. Actually, they are an essential complement to numerical simulators, since they provide insight into circuit behavior which numerical analyzers do not provide.

Symbolic analysis of electronic circuits addresses the generation of symbolic expressions for the parameters that describe the performance of linear and nonlinear circuits in three domains: DC, AC and time; some or all the circuit parameters can be kept as symbols.

Due to the fact that these expressions remain valid during the change of component values (as long as models remain valid), designers can have both, an insight into the behavior of the network and use the expressions to optimize the circuit’s performances.

This e-book presents, details and exemplifies famous symbolic analysis techniques. Industrial R&D topics, recent developments and future trends in the field of symbolic analysis are also highlighted. This makes the e-book a good resource for circuit analysis. Thus, it is intended for students and researchers as well as for industry designers.

Symbolic analyzers have the potential to offer knowledge to sophomores as well as practitioners of analog circuit design. Actually, they are an essential complement to numerical simulators, since they provide insight into circuit behavior that numerical analyzers do not.

Symbolic analysis of electronic circuits addresses the generation of symbolic expressions for the parameters that describe the performance of linear and nonlinear circuits in the three domains: DC, AC and time; some or all the circuit parameters can be kept as symbols. In particular, in AC analysis these expressions are generated as ratios of polynomials in the Laplace variable s, with, as coefficients, the sum of products of small signal elements of the design vector. Symbolic expressions for characteristics, such as voltage and current gain, input and output impedance etc. can be easily obtained. Furthermore, it is easy to acquire network characteristics such as sensitivity and noise.

Due to the fact that these expressions remain valid during the change of component values (as long as models remain valid), designers can not only have an insight into the behavior of the network but also they can use the expressions to optimize the circuit’s performances.

The first generation of symbolic analyzers was proposed in the late 60’s. Since then, these analyzers were promptly recognized as crucial tools to automatically generate the behavioral model of analog integrated circuits. Actually, many techniques and programs have been presented for the symbolic analysis of linear and even nonlinear lumped time invariant circuits. These proposed techniques can be classified into four major categories:

This book presents details and exemplifies such famous techniques. This makes the book a good resource for circuit analysis. Thus, it is intended to students and researchers as well as for industry designers.

For large (and medium) size circuits, computed analytical expressions become too large and their number of terms is so important that its manipulation and interpretation become impossible. The book puts also the stress on this problem and highlights some techniques adapted to approximate symbolic description of circuit characteristics.

The outline of the book is as follows:

Chapter 1, an overview chapter, presents a survey of the state-of the art of symbolic analysis techniques for the design and the verification of analog integrated circuits. It highlights major developments in this field over the past several years and presents the outstanding problems for future research.

Chapter 2 gives a description of the Modified Nodal Analysis method. Analysis procedures of circuits containing classical and modern circuit elements are described. These methods are explained clearly in a number of examples with a view to the matrix form which is appropriate for computer implementation.

Chapter 3 describes the modeling of nullor-based active devices from the circuit level of abstraction: active devices (voltage-mode, current-mode and mixed-mode operations). Several examples using nullor-based models illustrate its use to calculate fully-symbolic small-signal characteristics of linear analog circuits as well as on the analysis of nonlinear circuits.

Chapter 5 details and exemplifies the flow-graph approach. It presents used approaches for the determination of the modified Coates flow-graphs. Symbolic sensitivity using this technique is briefly introduced.

Chapter 6 introduces the two-graph method. It details the construction of the corresponding networks, and presents such analysis both the frequency and time domains. The chapter also focuses on partitioning techniques and on active RC-circuit synthesis using the two-graph method.

Chapter 9 deals with sensitivity computation based on the auxiliary circuits. Three procedures, for the sensitivity analysis using auxiliary circuits: the Bykhovsky Perkins Cruz’s method, the incremental-circuit approach and the adjoint-circuit approach, are presented. Advantages and drawbacks of these procedures are pointed out. Some illustrative examples are exposed.

Chapter 12 focuses on the automatic nonlinear behavioral model generation using symbolic circuit analysis. It gives an overview of the symbolic/numerical algorithms for extraction of dominant behavior of linear systems, e.g. formulas for poles and zeros as well as algorithms for generating behavioral models from nonlinear differential-algebraic systems of equations. Applications of analysis and modeling of mixed electrical and mechanical systems are also presented.

Chapter 14 is concerned with symbolic analysis techniques for analog circuit fault diagnosis and automatic design. It presents a symbolic approach to the design centering problem, and details testability and fault diagnosis of analog integrated circuits. In addition, it highlights modeling of power electronic devices based on symbolic techniques.

Chapter 15 presents a brief description of CMOS ring VCOs, where particular emphasis for differential delay cell ring VCOs is given. Then, symbolic characterizations of the VCOs are detailed. The proposed approach relies on the resolution of the differential equations modeling each VCO delay cell. A working example for the case for a symmetric load ring VCO is presented, and obtained results are compared against those obtained with numerical simulation.

Chapter 16 describes the use of symbolic methods applied to the automatic exploration and characterization of analog and mixed-signal systems topologies and architectures. Synthesis techniques based on algorithm-level, using an HDL description, and employing, both, a modified signal flow-graph approach and a pattern recognition technique are presented.

Chapter 17 deals with application of symbolic circuit analysis for failure detection and optimization of industrial integrated circuits. It demonstrates how symbolic analysis and approximation allows analyzing industrial analog building blocks systems which were considered to be symbolically unsolvable before. Besides circuit failure analysis and modeling, a novel methodology that provides a new application-specific compensation for achieving highest performance requirements, is given. The methodology is demonstrated on several industrial examples.