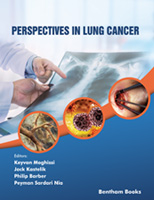 OUR RAISON D'ÊTRE FOR ANOTHER BOOK ON LUNG CANCER


Looking at the hecatomb of books on lung cancer buried under the dust of library shelves,one can legitimately wonder and ask themselves the question: Why do we need yet another tome on Lung Cancer?


As initiator and principal Editor of the book series, Frontiers in Lung Cancer, I acknowledged that there exist many such books. However, during my long career in medicine, I have formed the opinion that such books should essentially inform, teach and portray what is good practice in the field. Above all, a book should have regard for the best care and treatment outcome of patients; I believe there is a vacuum within the currently available textbooks on lung cancer.


In Perspectives in Lung Cancer, the first volume of the series, our aims are to highlight updated practices and the incorporation of new ideas and technologies related to diagnosis and treatment of lung cancer.


One important aspect of this book is provision of the facts and method of procedures as practiced, with proposed methods of diagnosis and therapy, written by experienced authors. The importance of this is that readers need not be lost in a maze of information without a signpost to the path to take.


Professor Keyvan Moghissi, BSc, MD, MS Chir, FRCS (Ed), FRCS (Eng) FETCS. In 1970 he was appointed Consultant in Cardio-thoracic Surgery.In 1982 he was honoured by receiving Membership of Academie Nationale de Chirurgie (Paris) and FRCS (England/ad Eundam). In 1987 he was elected President of European Association forCardiothoracic Surgery. In 1990 he became an Honorary Professor at the University of Hull. He is Clinical Director & Consultant Cardiothoracic Surgeon at the Yorkshire Laser Centre, UK and Honorary Consultant in Laser Surgery and Photodynamic Medicine at North East Lincolnshire & Goole Hospitals NHS Trust.


He has published a number of books and chapters in books in Cardiothoracic surgery, Laser and Photodynamic therapy with over 400 publications and presentations.


He has a special interest in pleuro-pulmonary malignancies, and has a number of skills and qualifications in Postgraduate EducationTraining and Simulation.


He has published over 100 articles and Chapters in Lung Cancer and Respiratory Medicine. He is involved in the Respiratory Specialty Advisory Committee, British Thoracic Society Council, Educational and Professional and Organisational Standards committees and Regional Adviser for the Royal College of Physicians.


Doctor Philip Vernon Barber, FRCP is a Consultant Respiratory Physician, Manchester University Hospital Foundation Trust. He is Lung Cancer Lead Clinician, Macmillan Cancer Improvement PartnershipExpert Advisor to the NICE Centre for Clinical Practice. He led the Macmillan Cancer Improvement Partnership which in 2014 initiated the Manchester Lung Health Checks programme for the early detection of lung cancer in high-risk populations. He is a specialist adviser to the Nice Centre for Clinical Practice and a Board Director of the Medicines Evaluation Unit, winner of the Queen’s Award for Enterprise in International Trade, 2020.


Surgical Anatomy of the Chest & Lung is authored by Keyvan Moghissi and Peter Tcherveniakov; It addresses the classical standard aspects with updated anatomy as befits Video-Assisted Thoracoscopic Surgery (VATS).


Biology and Molecular Evolution of Lung Cancer is written by Sean Knight, who brings depth to the subject.


Screening for Lung Cancer is authored by Philip Barber, a pioneer and critic of the slow pace of advance, with expertise related to population screening for lung cancer including auto fluorescence bronchoscopy (AFB).


Imaging for Lung Cancer and Image Guided Surgery and Therapy for Lung Cancer expandsto two chapters; Standard Imaging, comprising Radiology and Sonography are taken on by Ged Avery an expert and in Medical Imaging, old and new.


Fluorescence and Photodynamic Imaging (PDI) and Image guided Surgery and Therapy is dealt with by KeyvanMoghissi who has researched and practiced the subject.


A fascinating chapter in Three-Dimensional Reconstruction and Printing in Surgical Treatment of Lung Cancer is by Samuel Heuts and Peyman Sardari Nia.


Classical Thoracic Incisions –Surgical Access to Thoracic cavity as well as the Standard Surgical Treatment of Lung Cancer are by Keyvan Moghissi, reminding newcomers to the speciality of the basic standards which have been established by the ‘sweat and tears’ of pioneers. VATS is written by Mahmoud Loubani, a teacher and researcher in post graduate cardiothoracic surgery.


Uniportal VATS is explained by Marcello Migliore, the true Pioneer of the method. Radiotherapy for Lung Cancer is compiled by Andrzey Wieczorek and Nilesh Tambe, both experts on the subject.


Systemic anti-cancer therapy in the management of Lung Cancer is dealt with by Alexandra Lewis and Laura Cove-Smith, two outstanding clinicians and researchers.


It is a pleasure to include a chapter, The Role of Palliative Care in Lung Cancer, by Elaine and Jason Boland, both academics with hands-on practice in a busy cancer centre.


Laser Surgery and Photodynamic Therapy is by Keyvan Moghissi, who has pioneered their use in Lung Cancer.


Finally, Jack Kastelik and Keyvan Moghissi present Lung Cancer Centre Concept: Vision for the Future - food for thought for medical professionals who might be interested in organizing a healthcare centre for the treatment of lung cancer.