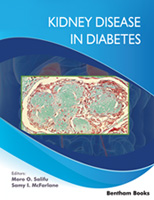 The first volume of the new book series Diabetes: Current and Future Developments presents comprehensive information on diabetes in conditions of kidney disease.

Diabetic kidney disease is by far the most common cause of kidney failure requiring renal replacement therapy in the Western world. It is also rapidly becoming the number one cause of kidney failure in many developing nations. Kidney Disease in Diabetes is the first of a new series of diabetes reference works published by Bentham Science Publishers. The book is edited by Professors Moro Salifu and Samy McFarlane – two renowned experts in clinical endocrinology and nephrology – and features chapter contributions by many experts in these respective fields. introduces the reader to the link between diabetes, obesity and chronic kidney disease (CKD). Chapters delve into many topics relevant to treating kidney disease in diabetic patients. Some of these topics include:

The broad spectrum coverage of informative topics about diabetic kidney disease make this an essential reference for medical students and clinical residents/healthcare professionals in nephrology, endocrinology, geriatrics, internal medicine and general surgery. Researchers interested in the clinical biochemistry of diabetes and associated disorders will also benefit from the information presented.


Moro Salifu and Samy McFarlane, are nationally and internationally recognized leaders in the fields of renal medicine and endocrinology diabetes and metabolism, respectively Their collaborative work in diabetic kidney disease that is funded by the National Institute of Health, the American Diabetes Association, as well as the National Kidney Foundation, has resulted in major, highly cited publications.


Dr. Moro Salifu is Chief of the Division of Nephrology and Director of the Kidney Transplant Program at SUNY Downstate. Dr. Salifu has won annual awards in the basic science category in the Department of Medicine for six consecutive years as well as four consecutive awards from the American College of Physicians. He has directed the nephrology fellowship training program since 2001 and in 2008 assumed the roles of Chief of Nephrology and Director of the Transplant Program. He is a recipient of many grants and has published research extensively. He is also a fellow of the American College of Physicians. Dr. Salifu's research interest are CKD disease progression, vascular biology and kidney transplant outcomes.

Dr. Samy McFarlane is a Distinguished Teaching Professor of Medicine / Endocrinology who completed his IM residency, Chief residency and endocrinology fellowship at SUNY-Downstate/ Kings County Hospital Center. Dr. McFarlane also holds Professorship in Emergency Medicine and Radiology. He is a prolific researcher and has authored over 300 publications including several books in the areas of diabetes, hypertension and cardiovascular disease. His funded research by the NIH, ADA and NKF as well as other major institutions is cited over 10,000 times. He is the founding editor of several journals and currently is the Editor-In-Chief for the International Journal of Clinical Endocrinology and Metabolism. He is the recipient of numerous awards including recognitions from the United States Army, the US Congress and the Gold foundation for Humanism in Medicine.