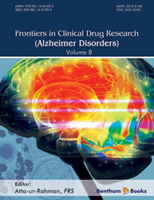 Bentham Science publishers has published a new volume of Frontiers in Clinical Drug Research - Alzheimer Disorders. The series-is edited by Dr Atta-ur-Rahman, is now in its eighth volume. The new volume features contributions from experts involved in leading medical institutions from around the world. In this volume, readers can find updated reviews on several topics including:

The volume is essential reading for readers interested in novel drug therapy for Alzheimer’s disease.


Atta-ur-Rahman, Ph.D. in organic chemistry from Cambridge University (1968), has over 1080 international publications in several fields of organic chemistry including 751 research publications, 37 international patents, 69 chapters in books and 222 books published largely by major U.S. and European presses. He is the Editor-in-Chief of eight European Chemistry journals. He is Editor of the world's leading encyclopedic series of volumes on natural products, Studies in Natural Product Chemistry, 54 volumes of which have been published under his Editorship by Elsevier during the last two decades.