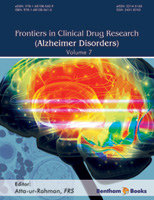 The new volume continues to bring interesting updates about the state of clinical drugs Alzheimer’s Disease and similar neurodegenerative disorders.


Frontiers in Clinical Drug Research - Alzheimer Disorders will be of particular interest to readers interested in drug therapy of this specific neurodegenerative condition and related brain disorders as the series provides relevant reviews written by experts in the field of Alzheimer’s disease research. The series is an ideal reference for researchers and healthcare professionals who wish to update their knowledge about Alzheimer’s Disease progression and therapy both pre-clinical and clinical settings.


The seventh volume of this series features chapters covering critical discussions on AD biochemistry and new therapies. The reviews in this volume include:


Atta-ur-Rahman, Ph.D. in organic chemistry from Cambridge University (1968), has 1080 international publications in several fields of organic chemistry including 751 research publications, 37 international patents, 69 chapters in books and 221 books published largely by major U.S. and European presses. He is the Editor-in-Chief of eight European Chemistry journals. He is Editor of the world's leading encyclopedic series of volumes on natural products, Studies in Natural Product Chemistry, 54 volumes of which have been published under his Editorship by Elsevier during the last two decades.