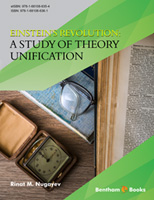 
The ebook, Einstein's Revolution: A Study of Theory Unification, gives students of physics and philosophy, and general readers, an epistemological insight into the genesis of Einstein's special relativity and its further unification with other theories, that ended well by the construction of general relativity.


The book was written by Rinat Nugayev who graduated from Kazan State University relativity department and got his M.Sci at Moscow State University department of philosophy of science and Ph.D at Moscow Institute of Philosophy, Russian Academy of Science. He has forty years of experience in teaching philosophy of science and relativistic astrophysics and research experience evincing in more than 200 papers in scientific journals published in Russia, Ukraine, Belarus, USA, Japan and several European countries, and has also published 8 monographs.


To achieve the object, a lucid epistemic model is exposed aimed at an analysis of the reasons for mature theory change in science (chapter1). According to the model, scientific revolutions were not due to fanciful creation of new ideas 'ex nihilo', but rather to the long-term processes of the reconciliation, interpenetration and intertwinement of 'old' research traditions preceding such breaks .Accordingly, origins of scientific revolutions lie not in a clash of fundamental theories with facts, but of "old" mature research traditions with each other, leading to contradictions that can only be attenuated in a more general theoretical approach.


In chapter 2 it is contended that Einstein's ingenious approach to special relativity creation, substantially distinguishing him from Lorentz's and Poincaré's invaluable impacts, turns to be a milestone of maxwellian electrodynamics, statistical mechanics and thermodynamics reconciliation design. Special relativity turns out to be grounded on Einstein's breakthrough 1905 light quantum hypothesis.


Eventually the author amends the received view on the general relativity genesis by stressing that the main reason for Einstein's victory over the rival programmes of Abraham and Nordström was a unificationist character of Einstein's research programme (chapter 3).


For more information about this book series please visit: https://ebooks.benthamscience.com/book/9781681086354